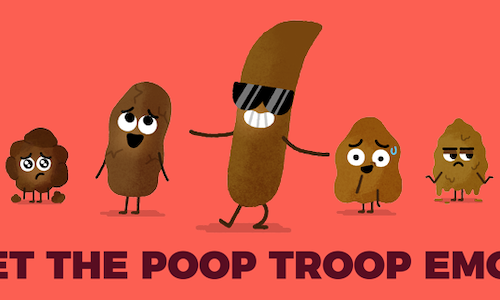 Giving Your Poop a Voice: The New Language of Constipation

That's right. We're talking about a strategic approach to addressing the subject of poop.

Pooping is normal. Everyone does it. So, isn't it weird how just reading the word can make you squirm with discomfort or giggle like a child?

Yet, not being able to poop is no laughing matter. In fact, it's downright miserable.

Imagine going to the doctor who says, "eat more veggies and fiber, drink more water and get more exercise" – even though you've tried it all to no avail. Sometimes explosive diarrhea.

Welcome to the world of millions of Americans affected by chronic idiopathic constipation, or CIC.

So, Synergy - a small, biopharmaceutical newcomer entering a crowded market dominated by large pharmaceutical companies –sought a way to facilitate better conversations between patients and physicians about their constipation that could lead to better health outcomes.

The key to success was the strategy anchoring the idea. It was deliberately conceived to break through, loosen up the conversation and reshape the constipation landscape. To stand up to – and out against – the establishment. To shine a light on how things SHOULD be done.

To stand apart from larger incumbents, we needed to take the position of a true challenger brand. This mentality became our North Star, guiding the approach via three strategies:

As we explored our strategic direction, we noted that social media was driving a culture of openness. People were now sharing personal information and photos as the norm.

But talking about bodily functions—including constipation—was still taboo. Why?

The answer came from some cultural observations:

Emojis have shifted our communication from verbal to visual: While in consumer culture emojis have become a ready social lubricant to express feelings without words, in healthcare they were virtually non-existent."

The brilliant, breakthrough insight? People living with CIC were prisoners of the stigma around poop problems. They wanted a dialogue about poop without fear of ridicule, but didn't have a way to engage in such a conversation.

We leaned into the current cultural behavior surrounding poop. We loosened up to start a real patient-doctor conversation, not a clinical one.

We developed Confront Constipation, an unbranded campaign featuring a landing page, downloadable patient resources, and the Poop Troop as the centerpiece. The Poop Troop emoji keyboard app featured 14 emojis that visually depicted the range of bowel movements and emotions people with CIC experience. From Sausage Sally to Waterworks Wally to Plugged-Up Paulie, we wrote stories for each that addressed the realities of CIC in a humorous, "straight talk" way.

The unique approach resonated with media following the launch of the campaign, who embraced Synergy's nontraditional efforts to destigmatize CIC and make people feel better about conversations.

What's next? Building on this momentum, we are exploring how the Poop Troop can help consumers take the next step to talk to their physician about CIC treatment options. Following feedback from physicians, we will also consider how we can meaningfully empower healthcare providers to prompt a more productive conversation about treatments for CIC.

Video for Giving Your Poop a Voice: The New Language of Constipation