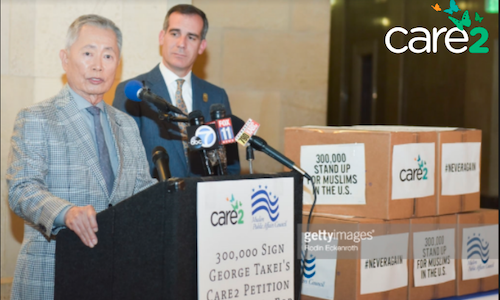 When actor and activist George Takei was just 5 years old, his family was forced into a Japanese internment camp. When the Trump administration began using similar rhetoric targeting Muslim Americans, Takei knew he had to act quickly.

Just one week after the presidential election, a former spokesperson for a major super PAC backing Donald Trump said the mass internment of innocent Japanese Americans sets a "precedent" for Trump to follow through with his plan to create a Muslim registry.

Takei responded by starting a Care2 petition, Care2.com/NeverAgain, to gather support for the Muslim community and allow signers to show Trump they do not support any policies that would deprive Muslims of their freedoms under the Constitution, with the intent to deliver the petition signatures in person to the Muslim Public Affairs Council (MPAC) and government officials in Los Angeles as a show of support.

Together with Team Takei, Care2 created a social media strategy that leveraged George's huge social footprint. Takei leveraged his online community of over 10 million Facebook followers and 2.51 million Twitter followers to garner support for the petition, and Care2 promoted the petition to its 40 million members via email newsletters and onsite assets to drive action.

Care2 produced a video to promote the petition, and Takei filmed a video letter in which he spoke about his experience in an internment camp. Care2 also tapped into other like-minded influencers, including actor Mark Ruffalo, to drive traffic and signatures.

Care2 engaged a PR agency to create a proactive press strategy and line up media opportunities for Takei, who appeared in over 16 media outlets promoting the cause, including CNN, ABC, NPR, and Mic.

Care2 reached the campaign goal of 100,000 signatures within five days of launch, ultimately gathering over 319,000 petition signatures over the four-week campaign.

The campaign achieved over half a billion earned media impressions after Care2's PR team set up interviews for Takei with CNN, ABC News, Entertainment Tonight, and others, and the petition was featured in NPR, Time, Mic, MSN and more.

Over 1.4 million people viewed the Care2 video featuring Takei's story, and nearly half a million tuned in to Facebook Live to watch Takei address the crowd at LA City Hall.

In addition to raising awareness and creating a movement, Care2 also recruited over 200,000 new email subscribers for Team Takei, successfully tripling their email list in less than a month.

Video for Care2 and George Takei Stand with Muslims 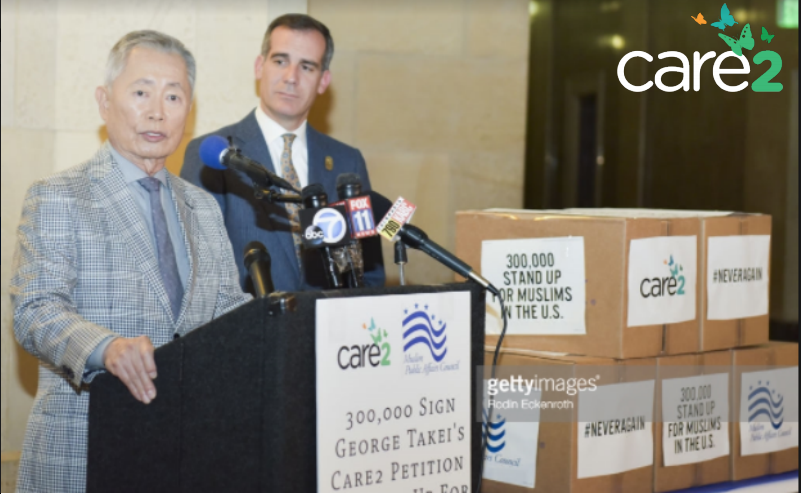 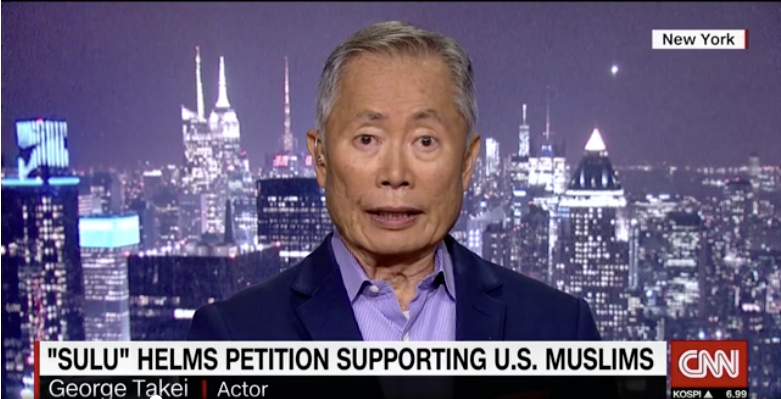