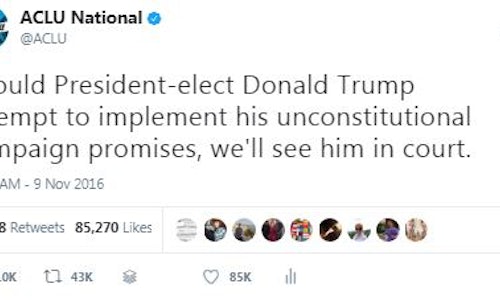 On November 8, 2016, Donald Trump was elected president. The next day, the ACLU tweeted, "Should President-elect Donald Trump attempt to implement his unconstitutional campaign promises, we'll see him in court." That confident tweet set the tone for ACLU's response to the Trump administration's violations of the Constitution. We followed through with that promise when we sued the Trump administration over the Muslim ban. As our followers grew, we realized we had an important role to play providing accurate information and actionable steps.

The ACLU's Twitter has been an important part of the resistance to Trump's unconstitutional agenda, and has worked to serve as a vital source of information and hope to more than 1.3 million Twitter followers. Our goal is to use Twitter to keep people informed and engaged about our work, and to uplift news and stories that would not otherwise be heard. In addition, we worked to develop a tone that was compassionate, to the point and when appropriate, has a sense of humor so that our supporters feel there is a distinct voice behind the platform. Our goal is to use Twitter to share original videos, images and blog posts, react to the news of the day, help build narrative, and serve as an advocacy tool for reaching decision-makers.

We have worked to create a tone that is informative and engaging. We do this by utilizing all of the tools around us—including graphic designers for snackable graphics, a multimedia producer for videos and lawyers to provide fact checks.

Our strategy was solidified the weekend of the Muslim ban. From the moment Trump announced his executive order, we had our messaging ready that this is really a discriminatory ban and blasted that out in tweets and social media graphics. This helped us educate supporters quickly. Then early morning on Saturday, ACLU and partners sued, and the digital team was ready to spring into action. We quickly posted a blog post explaining that we sued entitled "Trump Begins His Unconstitutional Program of Anti-Muslim Discrimination."

Shortly thereafter, our social media manager went to JFK airport and provided live social coverage of the ACLU lawyers inside the terminal and the protests outside. She utilized all the tools at her disposal, including Twitter and periscope. While she was at the airport, another staff member was elevating voices of partner organizations, affiliates and activists at airports across the country, updating our supporters on the status of the legal case, legal information for people impacted by the ban, and elevating the voices of people posting on Twitter that they were donating money to the ACLU, including celebrities such as Sia, Judd Apatow, and Chris Sacca.

We also used Twitter to encourage supporters to show up at the courthouse, where ACLU lawyers were arguing against the ban. Our multimedia manager filmed video outside the courthouse. After the judge blocked the ban, our graphic designer quickly created a victory graphic, and a video of ACLU executive director was posted on Twitter.

We have worked to continue to keep these new followers engaged both by sharing what is happening in the Trump administration. With a president who also interacts with his followers directly on Twitter, we have used the medium to respond to him directly. Twitter has been an important venue for elevating personal stories as well. When health care was under attack, we retweeted stories of individuals with preexisting conditions. When Trump ended DACA, we shared the stories of individual Dreamers.

We also use our Twitter to share about less front page news that not everyone would know about, and as an advocacy tool. For instance, we just elevated used our Twitter platform to ask Motel 6 if it was corporate policy to notify ICE.

The gist of our strategy is to be accurate, engaging and quick, in that order.

Over the past year, our Twitter audience has increased by more than a million followers, and we have had more than 15 million engagements. Many of the most popular tweets have been reacting to breaking news, and our feed has served as essential reading for reporters and anyone who wants to stay informed. Our tweets are regularly the top performing post on any topic. The ACLU's tweets are often cited in media outside the platform. (A highlight was when Lin-Manuel Miranda cited an ACLU tweet on Late Night With Seth Meyers).

Most importantly, though, our tweets have inspired real action. People show up at protests, call their representatives, and stay informed citizens because of the information that we provide.