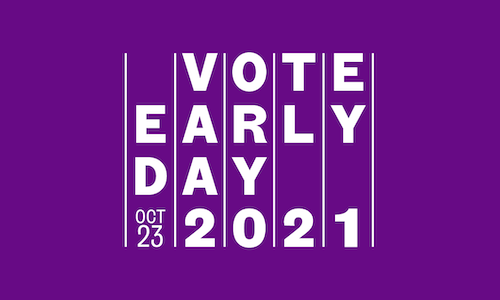 Vote Early Day is a national movement of nonprofits, businesses, election administrators, and creatives working to ensure all Americans know their options to vote early. In 2020, the celebratory holiday happened on October 24th and aimed at providing the over 200 million eligible Americans with the information they needed to vote early in their counties and districts amid COVID19 restrictions. While the idea was conceived before COVID 19, the challenges of 2020 solidified the significance and the need for Vote Early Day.

The impact of the inaugural Vote Early Day was as monumental as the election, uniting over 2,700 companies, nonprofit organizations and election administrative partners like When We all Vote, MTV, Headcount, Black Voters Matter, Sweetgreen, World Central Kitchen, and more, who helped drive over 102 million voters to cast their ballots before Election Day, with thousands of in-person and digital events happening across the nation.

On October 24th, Vote Early Day was at the center of the conversation about early voting on social media. Our content helped guide voters to the polls by helping them make a plan to vote early that works best for them and their states guidelines. In another first, presidential candidates, President Trump and Vice President Biden, along with a long list of other noteworthy individuals President Obama, Lady Gaga, Leonardo DiCaprio, Rosario Dawson, shared the message of #VoteEarlyDay across social.

The movement united and galvanized thousands of get-out-the-vote organizations and campaigns around a singular message and day of action, without competing with their existing work. Over 600 brands and businesses used the information and resources to reach their employees and networks. Brands gravitated towards Vote Early Day because of the ability to seamlessly integrate the message and spirit into their existing branding and voice. Vote Early Day worked with a diverse group of companies, brands and organizations to curate a number of exciting and educational activations and reach the widest audience possible.

Activations included, but were not limited to:

Original content across MTV Entertainment Group social channels partnering with influential talent and creators such as:

MTV’s “Vote For Your Life Stream” was a live, digital celebration to commemorate Vote Early Day on Saturday, October 24th. Hosted by MTV’s Kevan Kenney, the 60-minute blowout featured musical performances by Why Don’t We, Dove Cameron, 24kGoldn, CHIKA, and celebrity appearances from G-Eazy, Zachary Quinto, Skai Jackson, JoJo, AJ Mitchell and other young activists who are getting out the vote – all while providing information on early voting options and encouraging viewers to vote on Vote Early Day. Comedy Central developed Vote Naked, a first-of-its-kind Comedy Central voting campaign to encourage Americans to vote safely by casting their ballots. Vote Naked launched in September 2020 with the help of influencers such as Mia Khalifa and Alexandra Daddario to engage our audience in the election in a fun and light way. On Saturday, October 24, CMT celebrated Vote Early Day with both digital and on-the-ground activations across Nashville. The CMT Hometown Vote-athon was a full day (12-hour) music video marathon, interspersed with 25 country music artists drawing a direct line between patriotism and voting.

Twitter hashtag emojis for keywords related to the election including distinct icons and custom emojis for #VoteEarlyDay. Headcount partnership with Dave Matthews and The Dave Matthews Band to inform users of their options to vote early across social media. Facebook partnership with Sec. Padilla (CA) and Sec. Raffensperger (GA) to host a bi-partisan platform wide livestream on the importance of voting early, garnering more than 1.2m views. MTV, Gamers.Vote, and VENN Presented FALL-O-WEEN: On Vote Early Day eve, MTV led a first-of-its-kind early voting turnout tournament on Twitch for gamers, streamers, and influencers with competitors playing for $40k in total donations to charities of their choice. MTV commissioned large scale public artworks in 20 cities around the nation including on the Hudson River in New York and in Detroit, Philadelphia, and Atlanta. A Vote Early Day Red Carpet in partnership with the Houston Rockets at Toyota Center voting location

Additionally MTV issued over $100,000 in MTV Vote Early Day grants ranging from a circus in Philadelphia, to a statewide March to the Polls in Georgia a Dance the the Polls event in Baltimore, and several transportation efforts focused on making sure citizens are able to get to their early voting sites.

63% of the total votes in 2020 were cast early. Culturally, for the first time we saw a significant shift in the vernacular describing Election Day as the last day to vote - and the get out the vote community, candidates, news media and the electorate helped create an early voting season, not relying on one singular day to cast their vote. This was critical to ensure everyone had a safe and secure way to ensure their voice was heard during this momentous election. While many believe our election system needs an overhaul, the Vote Early Day movement is one solution for a number of barriers to voting as the system stands. The other major benefit of the movement is the reduction of lines and capacity issues at the polls for Election Day.

Virtually, #VoteWithUs held a rally on Vote Early Day that featured performances and appearances by

issued over $100,000 in MTV Vote Early Day grants ranging from a circus in Philadelphia, to a 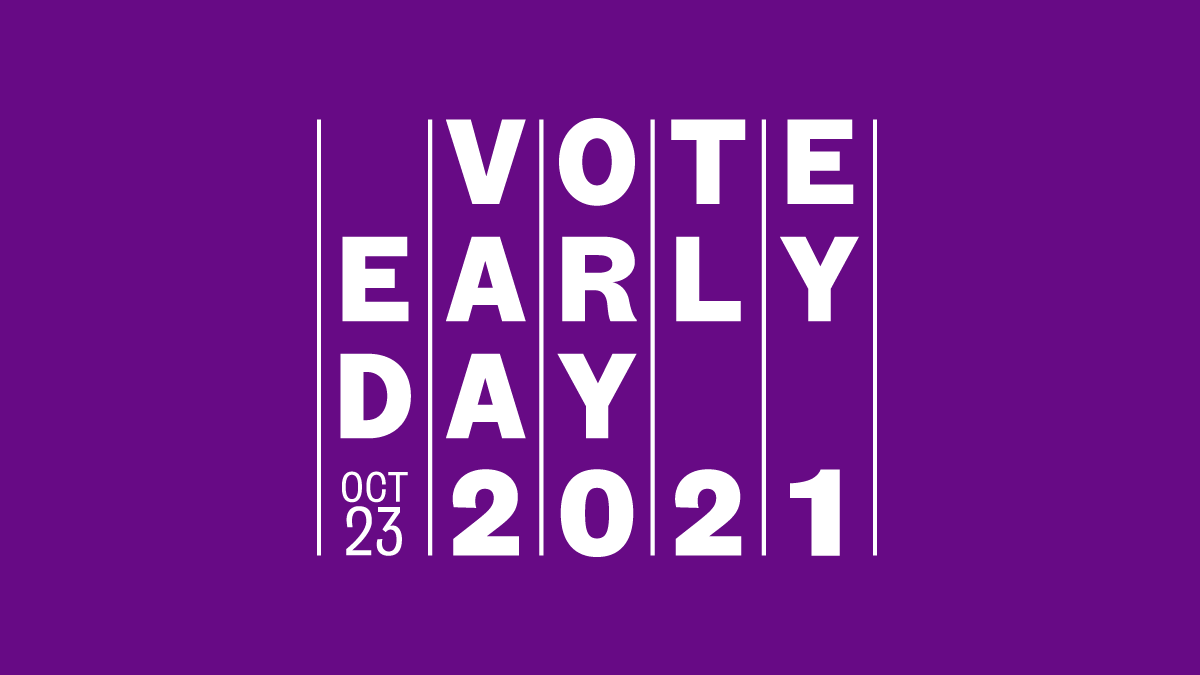