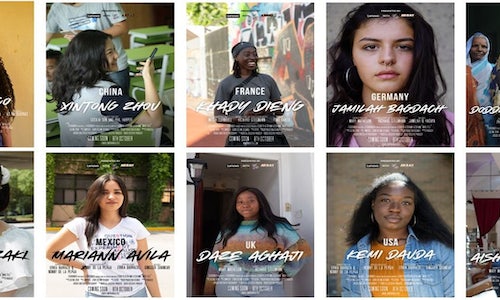 As one of the world’s largest technology companies, Lenovo strives to empower people to use technology to instill hope and make a positive impact for a better world. When the company issued its 2020 Empathy and Technology Report, 78% of people worldwide reported feeling a seismic gap in empathy. However, 51% of surveyed Gen Z participants (18- to 24-year-olds) said technology made them more empathetic because it helped them experience life through other people’s eyes. As a result of these findings, Lenovo challenged Zeno to create a campaign to connect with and amplify the voices of Gen Z, particularly young women – drivers of real change in the 21st Century – to ensure their stories were told and heard by a wide audience. Lenovo and Zeno centered its efforts around empathy, a unifying force that allows us to understand each other no matter our location, background, language, or ethnicity. Lenovo believes that by combining empathy with technology we can find a new route to communicate and lead conversation around today’s most burning issues.

New Realities is a groundbreaking, 360-degree global film series created by Zeno for the Intelligent Devices Group at Lenovo. Leveraging Lenovo Virtual Reality (VR) technology, and intended to draw interest across earned, owned, paid and social media around the world, New Realties allows those engaging with it to step inside the lives of 10 incredible young women in 10 countries who are using their voices to create meaningful change in their communities and beyond. New Realities provided a platform for these young women to be more vocal, spreading stories of adversity and triumph in new and innovative ways, connecting with a global, and local audience. Shot using revolutionary and genre pushing immersive 360-degree/virtual reality (VR) technology, New Realities allowed viewers to “walk” through an online portal and hear from young women themselves in a new way that brings their stories to life.

To start, Zeno enlisted the world’s most creative directors and filmmakers, both established and up-and-coming to ensure bold storytelling, clarity and purpose in each of the films. The filmmakers’ goal was to showcase determined, forward-looking and fearless young women who are passionate about societal issues, challenge norms and take action to inspire others. Creating honest and no-holds-bar content that not only would be compelling and relevant across boundaries but across cultures, as well, we made sure these stories were told in an authentic way that fully explored the young, female experience of today, and reflected the unique social and societal makeup of our protagonists’ home countries. The films aimed to draw significant earned, owned, paid and social media awareness on a global scale

To break through and gain serious reach for the campaign, Lenovo brought on a range of new stakeholders, partnering with the Girl Up Foundation, a leading gender equality initiative of the United Nation Foundation (UNF), and Academy Award-nominated filmmaker Ava DuVernay (“Selma, “13th”) as our global spokesperson. DuVernay was the perfect fit due to her activism and the grassroots foundation she founded, called ARRAY, which is grounded in empowering young women to continue growing their craft voice through activism. These partnerships further cemented our goal to ensure that these stories were genuine, soulful, truthful and expressive of Lenovo’s commitment.

To launch New Realities and the campaign in October 2020, Zeno built a fully immersive virtual gallery and hosted a worldwide movie premiere with a portal through which more than 400 attendees dialed into three simultaneous launch events across Asia, Europe, and the Americas. Upon entering the gallery as a virtual avatar, attendees had an elevated and immersive experience. Opportunities were also provided for viewers to learn more about the research findings released Lenovo’s Empathy and Technology report; drop into live Q&As with directors, producers, Lenovo executives and the young women themselves; and participate in a session with Ava DuVernay – all moments that continued to shine a light on the need for empathy and empowerment.

New Realities garnered 3,035 total pieces of global coverage with 10.8 billion reach across television, radio and online, with notable hits in Forbes, Vanity Fair Italia, People, Associated Press, La Stampa, Mashable, Times of India and CNN. An incredible 400+ global media delegates attended the virtual launch events. At launch in November 2020, our VICE/Refinery29 media partnership garnered over 27.6M collective impressions – and over 394K clicks. The VICE campaign has driven over 160K unique visitors to Lenovo’s digital hub housing the videos and articles. This partnership generated an 11%-18% brand favorability lift, and a 15%-23% brand affinity lift among VICE readers - mostly Gen Z. Of all of VICE’s video posts, the US video has driven the strongest CTR on VICE’s Instagram. Through paid social and storytelling media partners, Lenovo drove over 35.9M impressions, 28M unique video views, and 216K clicks - with YouTube driving 15.4M views alone. Nearly 5% of all video views were played to 25%, strongly competing with industry standards given the larger view count generated. The campaign supported the company’s strong performance in 2020 Q4, with Lenovo Intelligent Devices Group’s PCs and Smart Devices business leading the way in revenue for the year of almost US$40 billion, up 3.6% year-on-year. Despite these successes, the true measure goes beyond the creative inception and delivery. New Realities’ use of breakthrough visual storytelling connected with and impacted its desired audience, by showcasing the role of today’s younger women in making a powerful difference, often under challenging circumstances.