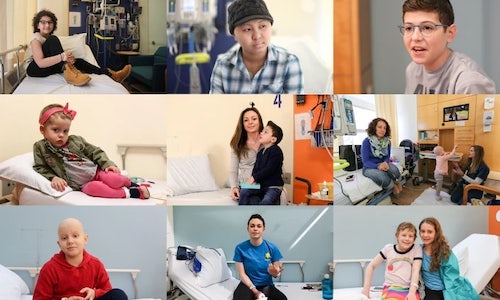 Memorial Sloan Kettering Cancer Center (MSKCC), a renowned cancer treatment and research institution, partnered with Humans of New York (HONY), New York-based blog and storytelling engine, to achieve three things: raise funds for pediatric cancer research, give MSKCC patients a platform to share their experiences, and empower MSKCC staff to deliver insights and expertise to patients or caregivers in need. The team went to social to create a campaign that gave their audience a more humanized, accessible look into the day-to-day challenges cancer patients encounter, as well as spread awareness around the implications of pediatric cancer conditions.

MSKCC and HONY created a two-week campaign in which HONY shared 60 photo stories and MSKCC shared selected posts and new complementary content. By focusing on social storytelling tactics, the two engaged in an ongoing conversation with individuals interested in cancer care. When partnering with Humans of New York, Memorial Sloan Kettering Cancer Center sought to meet people where they were - aiming to reach the right audience instead of endeavoring to reach a large audience. They also looked to establish a sense of community amongst their patients by giving them a channel where they can share and exchange experiences.

The campaign enabled the sharing of expertise from MSKCC specialists. MSKCC found that if they shared a video on a condition and showcased how they treat that condition at MSK, many times their audience, which might be patients and their families, found that information to be extremely useful.

The campaign married the appeals of ethos, logos, and pathos to form a beautifully balanced effect on the audience. The audience was trusting of the ethical credibility of MSKCC experts, believing of the logistical information shared around the cancerous conditions, and drawn in by the emotions emanated through the stories.

Overall, the campaign saw solid social success. The team was able to track audience engagement, with the help of Spredfast, and discovered a previously under-indexed demographic (women aged 18-24) engaging with their content, possibly for the first time. The campaign brought in an astounding 3.8 million dollars for cancer research in a two-week period. By the end of the campaign, Memorial Sloan Kettering Cancer Center had acquired ten thousand new Facebook fans, along with three thousand new Instagram users. During the campaign, MSKCC experienced 121,000 more daily organic impressions on Facebook, and saw a 78% increase in web traffic from social.

The expert insights delivered by MSKCC around their staff and patients coupled with Humans of New York's novel storytelling techniques led to a hugely successful social media campaign that will have lasting effects beyond engagement. This campaign has impressed a positive impact on peoples' lives.