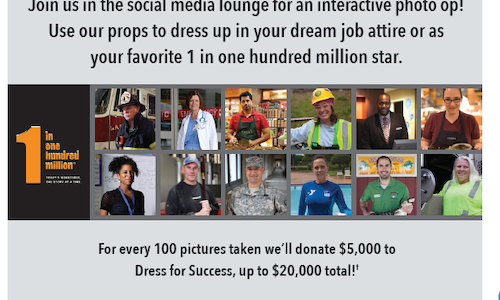 Get Social. Give Back.

The objective of this campaign at our annual customer conference, KronosWorks, was to increase the social media participation of our over 2,000 attendees - all while supporting a great cause.

Since our customers are not very active in the social media space, we provided them with multiple ways to get involved through a variety of platforms.

We had a hashtag (#KronosWorks) so that attendees could discuss the conference before, during, and after the event.

We also hosted a social media lounge in the conference expo hall where customers could dress up in their dream job attire - fitting the theme of our award-winning video series, "1 in One Hundred Million." Customers dressed up as everything from firefighters to nurses to waitresses, with the goal in mind to "celebrate work." For every 100 pictures taken in the lounge - which were also shared on social media with the hashtags #KronosWorks and #celebratework - Kronos donated $5,000 to Dress for Success (up to $20,000 maximum), an international not-for-profit organization that promotes the economic independence of disadvantaged women.

The first step of the campaign was to promote the hashtag, #KronosWorks. The hashtag is the name of the conference so it's easily remembered. It doesn't include a date so that it can be used throughout the year to continue the conversations.

The next step of the campaign was to pick a relevant charity that people have heard of and also tied to our business. Kronos selected Dress for Success, an international not-for-profit organization that promotes the economic independence of disadvantaged women. Kronos is a workforce management company with a charitable giving charter dedicated to building the workforce of the future. As a global company and top place to work, Dress for Success was a perfect fit.

Next we sought out photo booth vendors. We chose Pixe Social because of their ease of use. They automatically uploaded pictures to our Facebook album as they were taken, and sent an email to each participant that included a link to their picture on our Facebook page, which helped to encourage interactions - and thus brand awareness.

The most important step was to promote the various aspects of this campaign. Before the conference started, people were notified by email, through our social channels, and on our conference website of all the activities in this campaign.

At registration, attendees received program guides that described all aspects of the campaign – relevant hashtags, charitable donation, photo booth, and social lounge. We also used Twitter and Facebook advertising to gain additional awareness. Dress for Success helped promote the campaign on their social channels as well, further expanding our reach.

During the conference, we used push notifications about the various aspects of this campaign in our mobile app to catch people's attention. We also made multiple announcements during the event.

Signage for the campaign could be found all around the conference. In addition, our social lounge was fully staffed by Kronos employees who encouraged attendees to participate in the campaign, answer questions, encourage photo booth participation, and educate them on Dress for Success's mission.

As a result of consistent social media promotions, a sufficient amount of on-site signage, and well-executed email campaigns leading up to the event, we received more than 2,300 tweets from attendees during the conference, and a total of 424 "celebrate work" photos were posted to Facebook. We achieved our goal of $20,000 and donated the full amount to Dress for Success. We were blown away by the participation, increase in activity from previous years, and the charity as a whole. Our customers – those who were already social savvy and those who joined Twitter and/or Facebook at the conference so they could participate - helped make this heartfelt campaign a big success!

Finally, both internal and relevant external bloggers loved the different aspects of this campaign so much they blogged about it, which expand our reach even further. 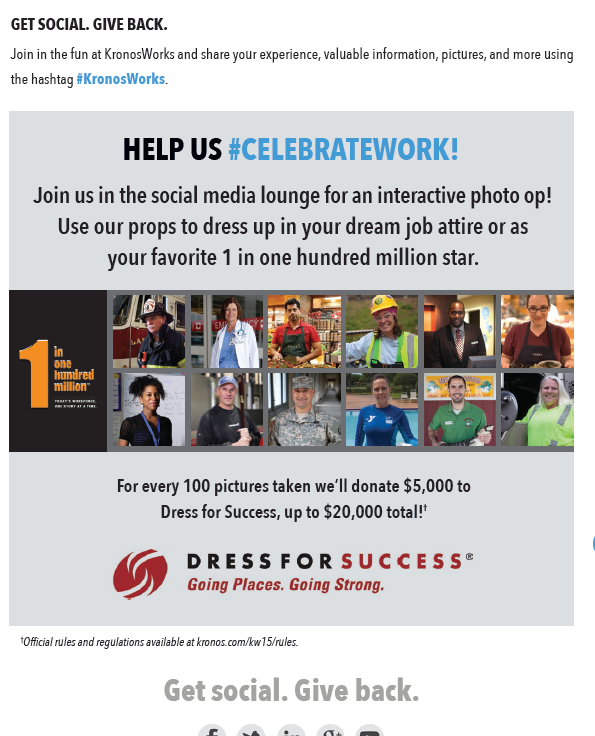