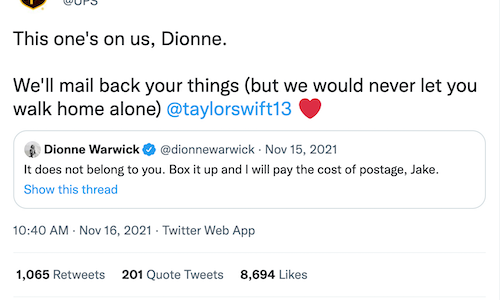 The biggest threat to UPS isn’t another shipping provider; it’s invisibility. The average person is exposed to 10,000 brand messages a day and 84% of those messages are neither noticed nor remembered (sources: Forbes, VIEO Design Study). The antidote to invisibility is creating ideas that break through the clutter and infiltrate culture in a way that gets people talking — which is exactly what we accomplished via our clapback to celebrity Dionne Warwick’s tweet. This clapback tweet was part of a larger initiative to build cultural relevance around UPS by leveraging organic social media to create talkable moments that stand out in feeds. Our goal is to use these moments to propel UPS from social feeds to headline fame and show the world we are more than just a shipping company.

On November 12, 2021, Taylor Swift released her latest re-recorded album, Red (Taylor’s Version). Conversation around the album took over social media in the weeks leading up to the drop – and continued to skyrocket in the weeks following, for a total of 2.2M mentions and 9.4BN impressions in the 8 weeks surrounding the release (source: Netbase). Conversation was largely around the album’s most anticipated song, the extended version of “All Too Well.” The 10-minute track references a scarf the singer lost during a previous relationship. Fans speculated that the song was about Swift’s ex-boyfriend Jake Gyllenhaal and quickly took to social media to demand that the scarf finally be returned to her. Also joining the Swift-scarf drama? Undisputed Twitter queen @DionneWarwick.

“If that young man has Taylor’s scarf he should return it”, the first tweet in her thread read. Warwick promptly followed up with: “It does not belong to you. Box it up and I will pay the cost of postage, Jake.” When Warwick’s offer started gaining traction with her 600,000 followers and the massive Swiftie army, we saw this as the perfect opportunity to hijack the cultural conversation by positioning UPS as the moment’s hero.

As @UPS, we fired off a quote tweet of Warwick’s offer, tacking onto — and taking over — the conversation..

“This one’s on us, Dionne,” we clapped back.

We then capitalized on the moment even further by ending the tweet with a reference to the song’s lyrics: “We'll mail back your things (but we would never let you walk home alone) @taylorswift13 ❤️.”

Our response quickly started gaining visibility as our double clapback (first at Warwick, then at Gyllenhaal) was welcomed into the conversation by Swifties and the Twitterverse. While the tweet seamlessly and organically fit into users’ timelines, the thinking behind it was strategic. Based on Warwick’s typical Twitter behavior, we knew she would likely engage with our response, which would extend our tweet’s reach to her 600,000+ fans. We also guaranteed success by finding a way into a trending culture conversation that was begging for social engagement.

Lastly, we sealed UPS’s journey from feeds to fame by establishing cultural cachet with Swift’s rabid fanbase. Not only did we show Swift support, we spoke her fans’ language by referencing her lyrics. These three factors allowed UPS to show up in an unexpected cultural play all while staying true to and emphasizing the brand’s core services.

However, the real measure of success was the earned media that the tweet generated – taking UPS from feeds to fame. Our clapback was featured by outlets such as Glamour, Bustle, Page Six and Fox News. Overall, our clapback drove over 125,045,818 organic earned media impressions for UPS (source: Trend Kite). Each of these views moved the needle on UPS being seen as more than just a shipping company. 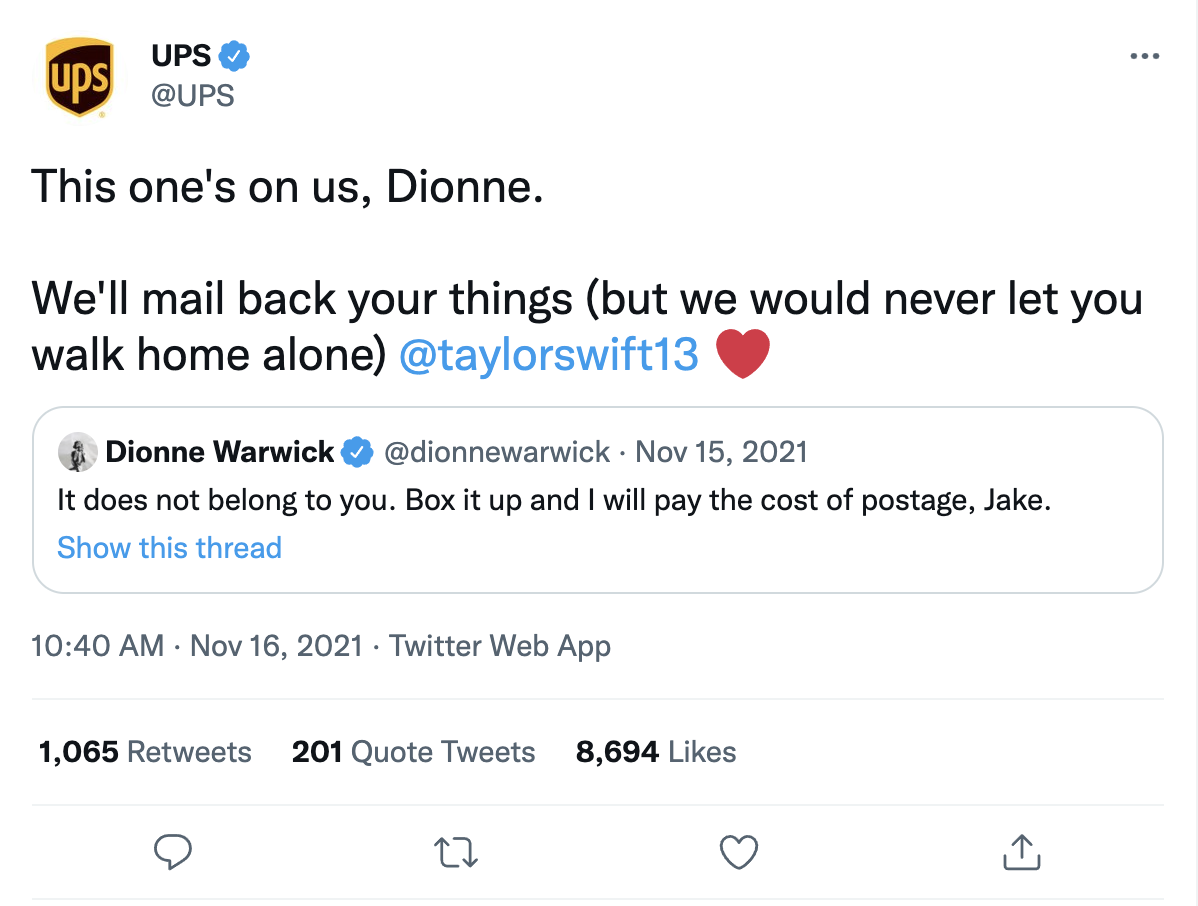