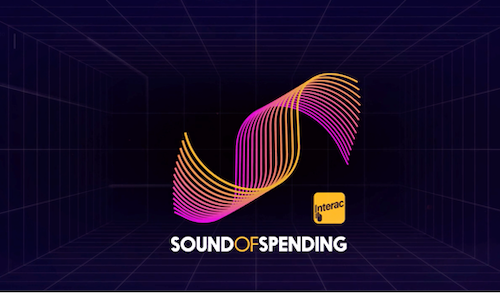 Interac is often seen as a logo on a card or a utilitarian technology, However, they are so much more than that. This led to their overarching brand platform “InLife” which set out to show that they, as a company, play a role in the daily lives of all Canadians, helping them keep track of their money, allowing them to get the most out of life.

An essential factor in chasing one's dreams is rooted in understanding how one’s money is spent. While showcasing the national data is interesting, we needed to get consumers to understand how their own spending habits shift over time, and where they stand in comparison to the country overall.

The main goal of this campaign was to shed new light on this role, specifically when it comes to Canadians understanding their financial habits, ensuring that customers see the added value Interac can bring to their lives, well beyond a card.

The Sound of Spending campaign used Interac’s spending data to show Canadians how their spending fluctuates over time. Because spending data can be difficult to understand, to ensure that all Canadians were able to truly comprehend and retain Interac’s message, we looked to deliver this data in a language that anyone could understand – Music.

Our campaign was centered around showcasing the platform’s ability to make data simple, digestible, and accessible to every Canadian.

To support the launch of the platform, we used a mix of video and audio tactics to drive awareness, and also showcase the simplicity of the output.

We leveraged simple short-form videos tailored to top performing audiences from previous campaigns. As we were working with a limited budget, even our awareness tactics needed to work towards driving people to site. The solution  for this was to pivot towards video formats that allow for an additional overlay that was able to house our call to action. Having this call to action meant that we were able to direct people to the site once they saw the video showcasing the platform’s simplicity.

Since the output of this campaign was a soundtrack of consumer spending, we needed to familiarize consumers with receiving easy to understand information via audio platforms, as our audiences are used to seeing Interac on TV or billboards. To establish credibility of Interac’s audio capabilities, we ran custom audio pre-roll and mid-roll spots within podcasts and music players. These assets not only showcased how easy it was to use the Sound of Spending platform, but also worked in getting consumers used to hearing from Interac, rather than seeing them.

With any new platform, word of mouth was an asset to the campaign. To spark conversation and create buzz around the around platform and its capabilities, we ran videos across Twitter that were aimed to showcase how easy it is to make your own track. These videos were targeted to specific interests and keywords related to the spending categories that users input on the platform to create their own track. As our audience goes to Twitter to have conversation, we knew that ads would not only showcase the platform’s simplicity, but also get consumers to naturally share their testimonials  of building their own track.

As the reason people listen to music in the first place is to have fun, we needed to find an environment that people use as an escape. This environment would need to be one that people go to in order to have fun, but is also naturally sound on, allowing us to play the National Track. As our audience skews relatively young, we found that Tik Tok checked all these boxes. Tik Tok is naturally a platform that people open when they have down time. Because these audiences knew they had time to kill on Tik Tok, we were able to let them know that they also had enough time to use the Sound of Spending platform and create their own track.

This campaign was centered around providing information and highlighting data to Canadians, and over the course of the campaign, the average time spent on site increased by 50%!

Not only did our time on site go up, we were also able to get users to take additional actions beyond listening to the Nation Track, by creating their own custom track. Of the people who listened to the National Track on site, 69% of them went on to navigate the site and build their own track. By consumers creating and downloading their own custom tracks, Interac was able to help them understand the ups and downs of their everyday spending. 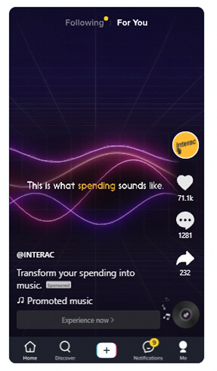 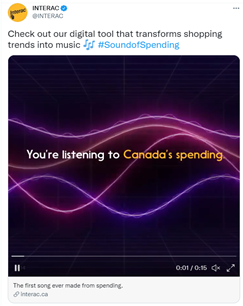 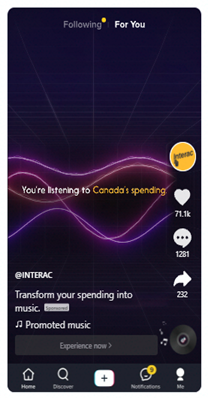 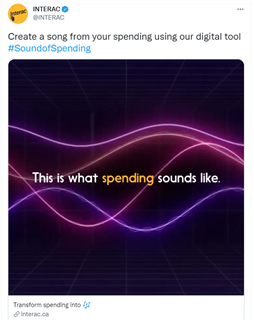 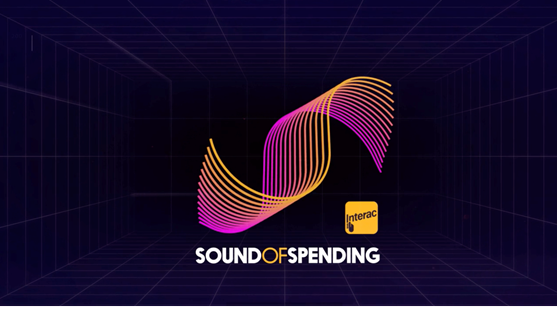