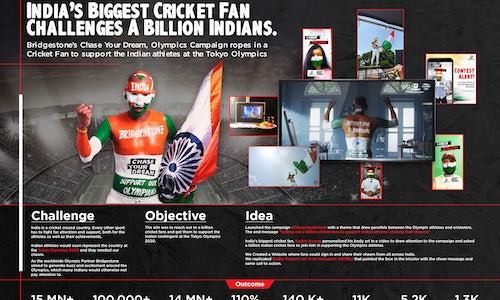 Campaign Objective: Olympics as the focal point, weave about the communication strategy to increase awareness, engagement and strengthen the connection of Bridgestone as the Worldwide Olympic Partner.

Market Insight: Cricket is a highly cherished sport in India and with a loyal band of devoted followers. It accumulates the maximum eyeballs both for international and local tournaments. The players are worshiped and command a huge share of voice on the internet whenever they perform

Market Challenge: With Indian athletes participating in Olympics 2020, we wanted to ensure their hard work and participation were acknowledged by our cricket-crazed country. However, When it is sports in India, it is the game of cricket that garners the highest viewership and commands a huge share of voice on the internet Every other sport has to compete hard with it to gather a similar magnitude of cheers, attention, or support

With Bridgestone India as one of the prime and proud sponsors of Olympics 2020, we wanted to establish a strong recall between the highly cherished sporting event and the organization. And, with the same intent “Chase Your Dreams” was coined.

A 360-degree digital campaign aimed at reaching out to the billion cricket fans in India and urging them to acknowledge the journey of every Indian sportsperson, just like the cricketers representing the country. We crafted an integrated Marketing Communication strategy that stoked touchpoints- video, augmented reality, media interventions,tech interventions,celebrity push, offline and online engagements all of which came together to form a narrative that resounded all the way to Tokyo 2020 Olympic games.

#Chase Your Dreams – Branded Films The “Chase Your Dream” film marked the launch of the campaign and it introduced our Brand Ambassador - P.V. Sindhu, Mary Kom, Sakshi Malik & Kidambi Srikanth. The motive was to draw parallels between the Olympic athletes and cricketers; that the determination, dedication, and hard work they put into their respective sports remain the same. The thematic film was followed by a series of 4 films commemorating the struggles of Indian athletes; represented by our 4 Brand Ambassadors.

The campaign also witnessed Sudhir Kumar, India’s biggest cricket fan, who came on board to drive the message home and inspire other cricket enthusiasts via a dedicated film. #Spread the Cheer - A Dedicated Microsite to collect wishes from the whole of India.

The engagement was driven by Chase Your Dreams Microsite which encouraged visitors to share their wishes live with the Brand Ambassadors. The site garnered a total of 1,103,269 reach, 1.5 lacs + cheers & wishes, and more than 500 Chase your Dream inspirational stories by people.

#Engagement via Digital and Media Interventions:

1. Audio engagement with Alexa. “Khel Quiz” - First in the Category campaign initiated quizzes based on Olympic trivia on Alexa and connected Devices

2. AR Filter akin to Sudhir Kumar’ face paint was created and people were encouraged to record cheers for the Indian contingents

3. Leveraging the cricketing season of Ind vs SL series and being visible to cricket fans. Ads were strategically placed during live cricket matches (Ind vs SL) & the opening ceremony of the Olympics on Sony Liv

Impact: Reach - 166 MN The campaign reached 30% of the total digital audience in the country

Engagement-  40 MN, 80% of the engagement was achieved from the Top 20 Cities

The inclusion of data platforms like ZAPR also help in driving engagement among the relevant audiences.

The campaign has won “Global Marketing Excellence Awards” in the four categories: 1. Marketing Campaign of the Year 2. Best use of Digital 3. Best Use of Celebrity /influencer 4. Best integrated campaign CMO Asia Awards for:

Video for Chase Your Dream 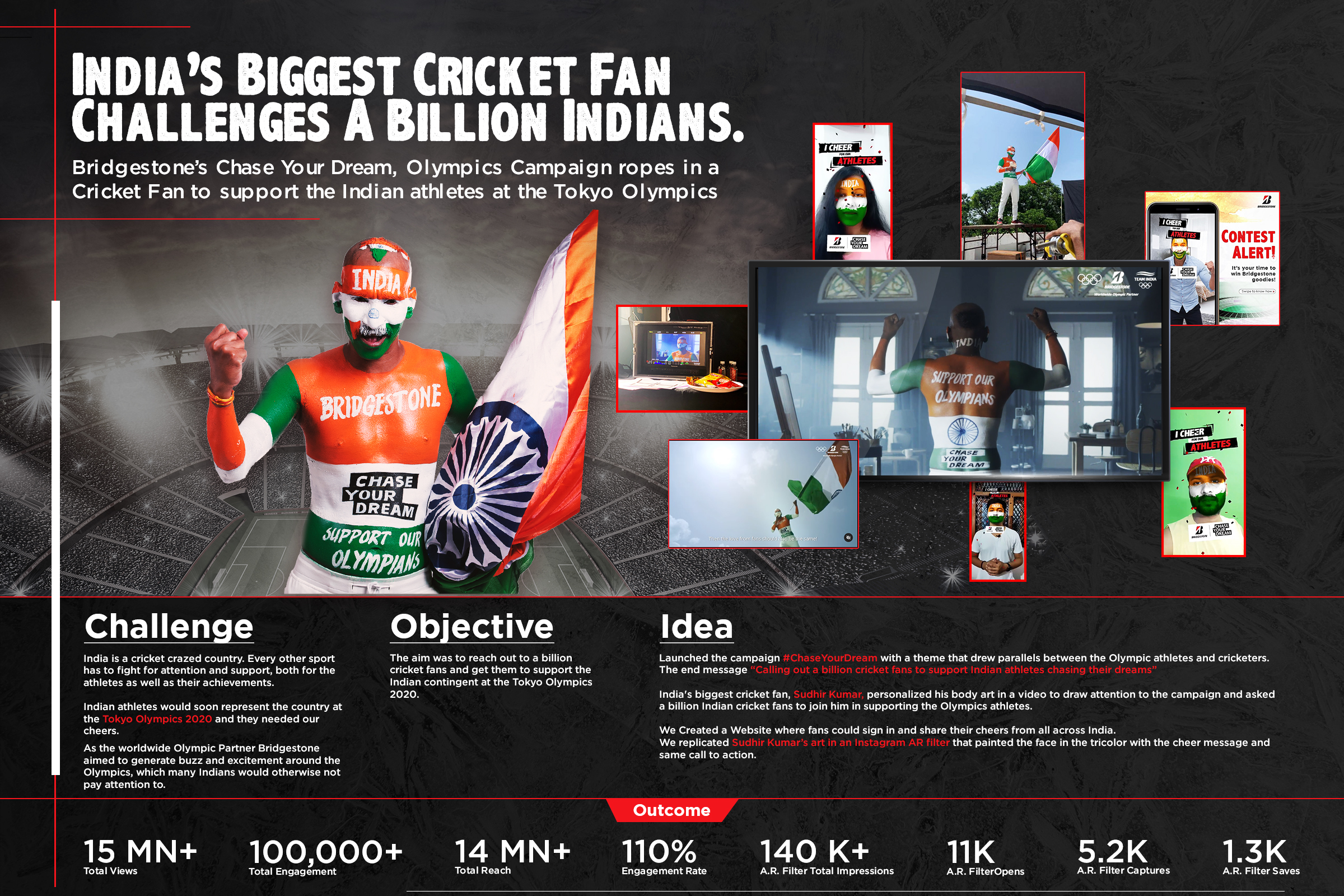