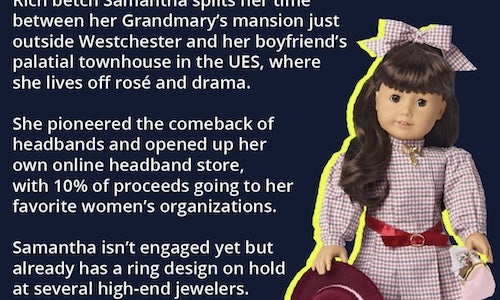 The campaign had a goal of making 2.07M total impressions across their social platforms and digital newsletter which was ultimately surpassed by 255 percent throughout its two-day flight (May 5 - May 7 2021).

Taking a 360 approach to the campaign, Betches created memes on their Instagram page for each of the six dolls under The American Girl Dolls brand with a description of how Betches has reimagined the characters personalities in 2021. Each doll took on a new humorous and modern personality in order to become more relatable to the women who grew up playing with these dolls - tapping into the nostalgia of the brand to garner authentic engagement. Betches also incorporated timely events and popular trends, such as the pandemic and goat yoga classes to help ground American Girl Dolls as a relevant brand.

The first step Betches took to develop this campaign was consulting a very important source material - the American Girl Dolls Ranked By Betchiness Betches article from 2016. This gave a baseline how Betches’ would shape their personalities and what they would do if these dolls had more of a grown-up edge. For the deep-cut references, Betches pored over American Girl Dolls Wiki, refreshing each character’s backstory.

Following the research, Betches began developing each doll’s new goals. Kirsten, the pioneer doll, is now “that friend” who's a figurative pioneer - meaning your friend who is always prepared with homemade goods. Molly was always a good dancer, and a little awkward, and the rise of TikTok would give her just as good an outlet for her talents as a tap dance recital (and being a little awkward is a timeless trait). Once Betches curated the present-day personalities, the team designed Instagram memes along with corresponding Instagram Stories. In addition, the team wrote a custom Betches newsletter module to provide additional reach and engagement.

Betches overall approach to this campaign was collaborative across their content, social and partnerships teams. The American Girl Dolls team trusted Betches’ authoritative, comedic brand voice to ensure the branded content was relatable and highly engaging. From brainstorming and conceptualizing the different “present-day” personalities for the original dolls to vetting concepts with our advertising partner for approvals, the team ensured the success of the campaign by playing on the nostalgia factor with their audience. Betches is one of the unique platforms where you can take this approach with a very traditional company to ensure reliability due to the snarky, comedic voice of Betches.

The American Girl Dolls 35th Anniversary campaign succeeded with a 360 plan inclusive of an original meme, Instagram story polls and slide ups, and an inclusion within the Betches digital newsletter.

The Instagram post garnered over 37K total engagements which produced a 358 percent delivery and created thoughtful engagement among the Betches and American Girl Dolls community through followers tagging their friends because of how they related to the characters that they grew up alongside.

Some comments on the meme carousel include: 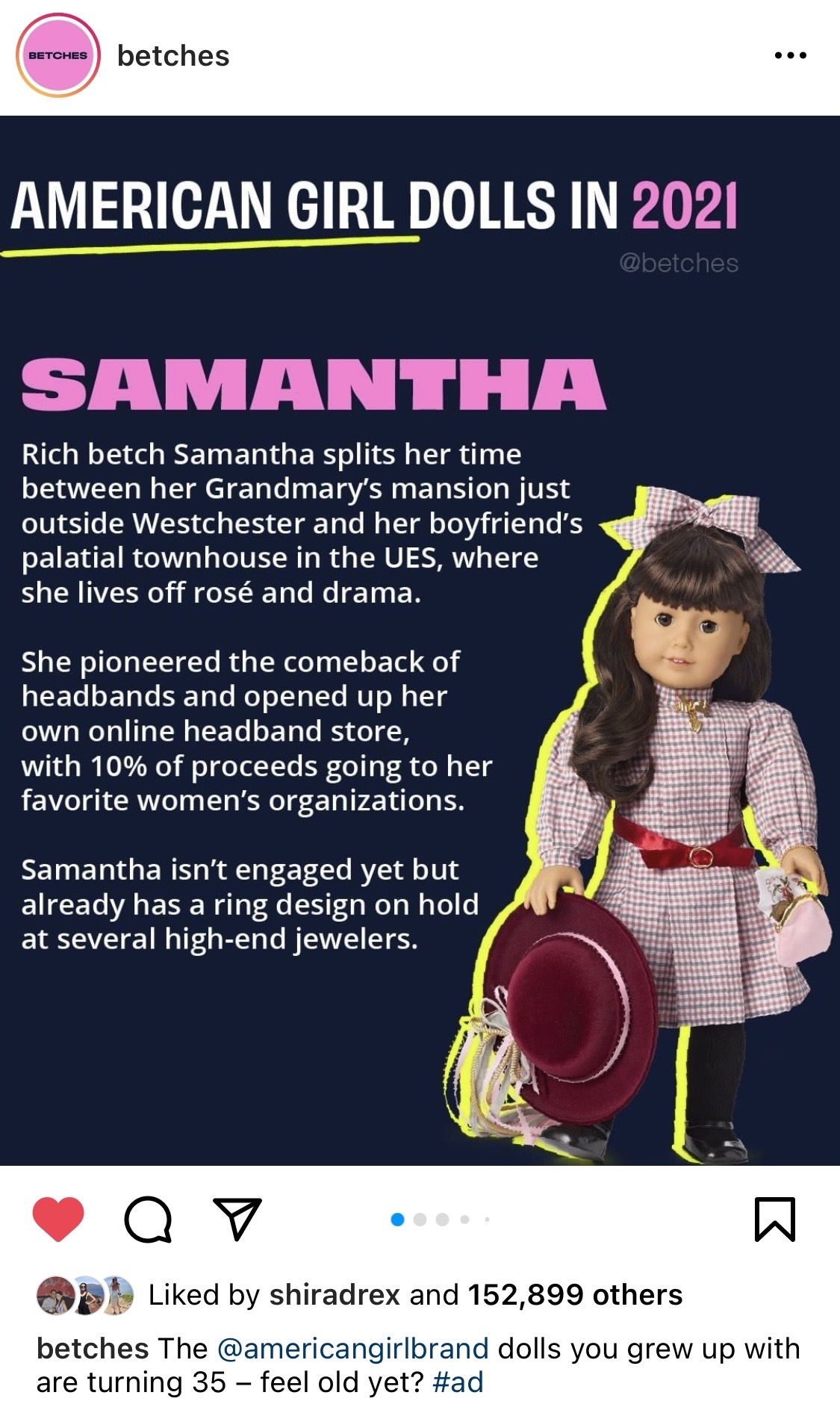 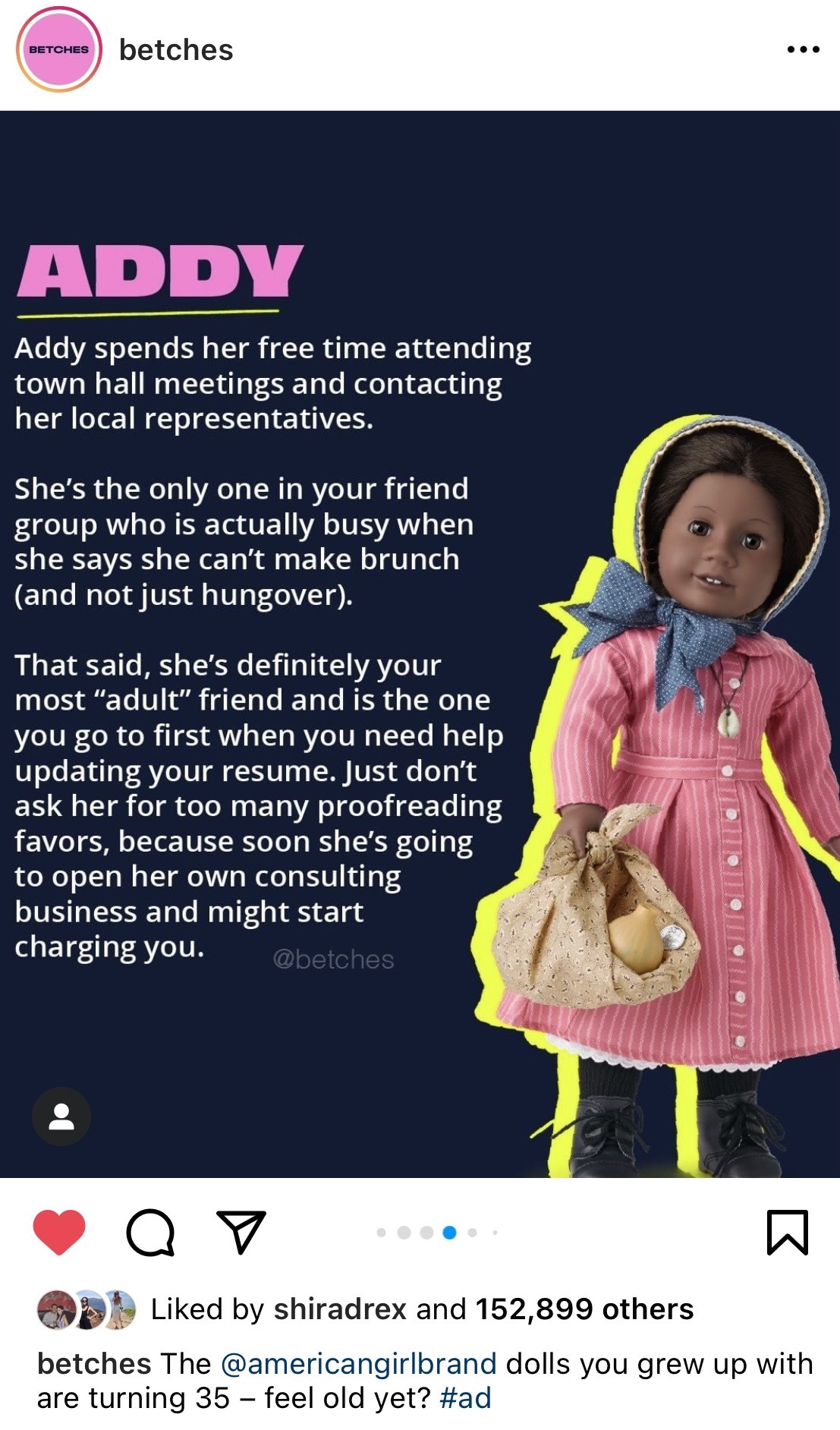 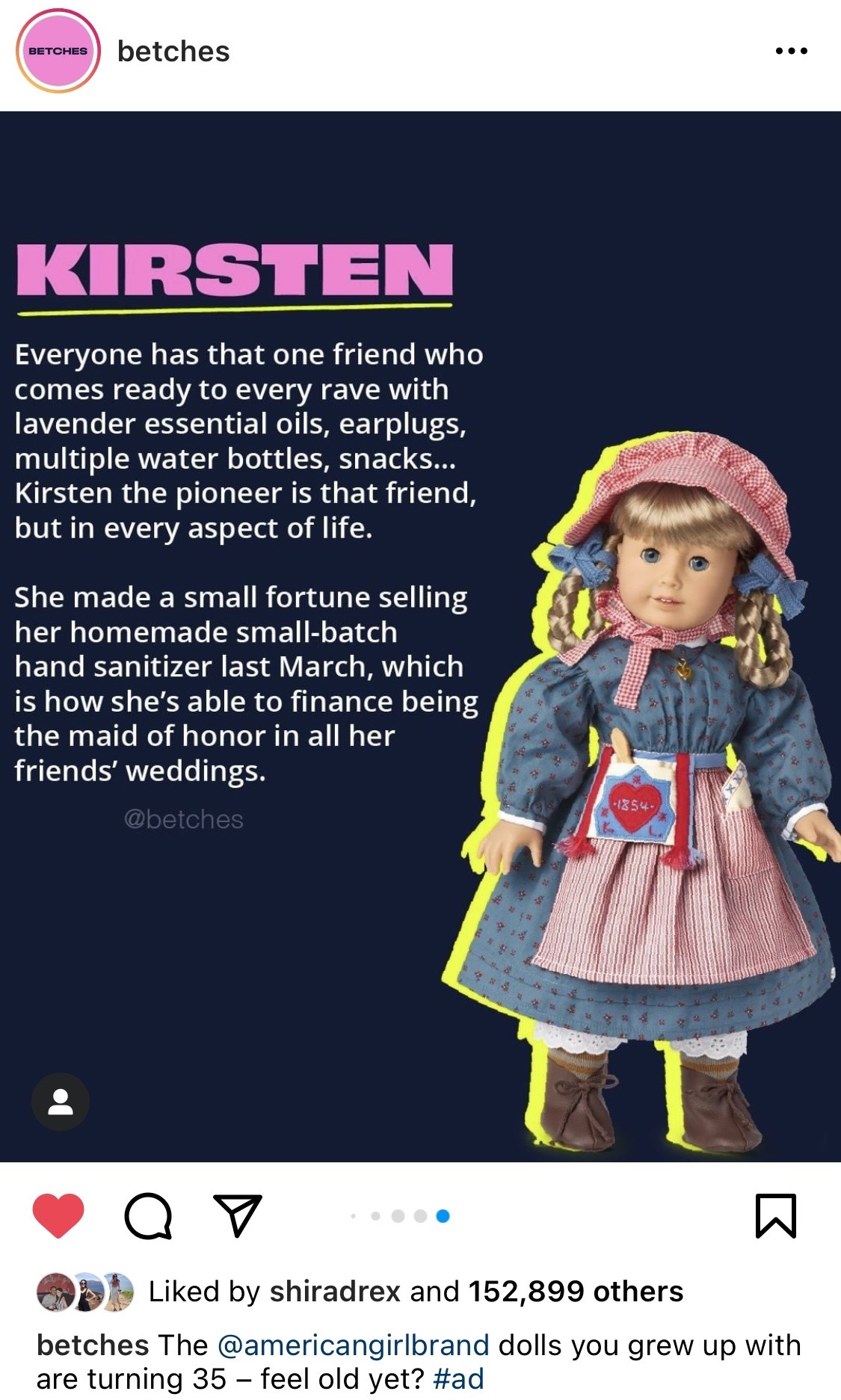 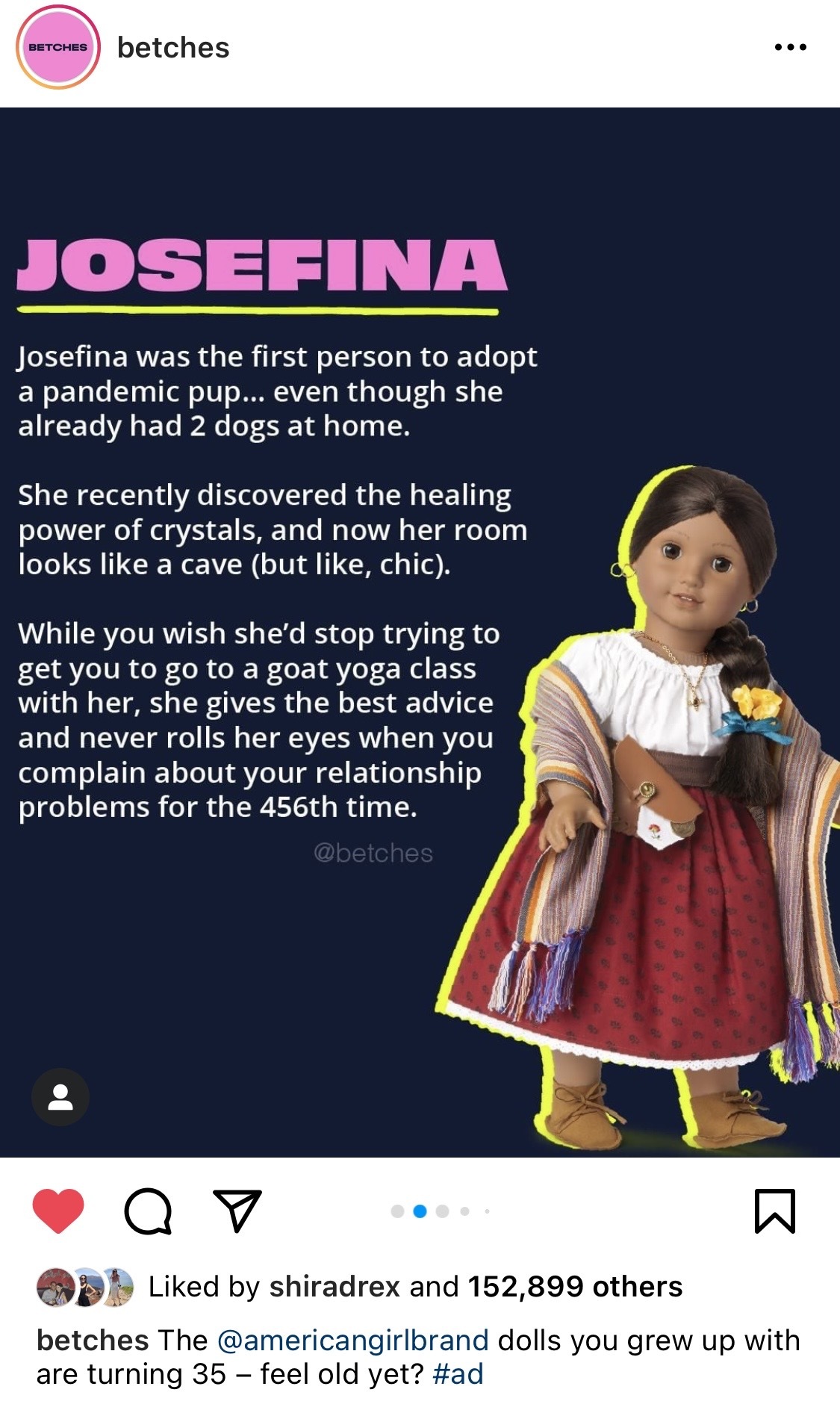 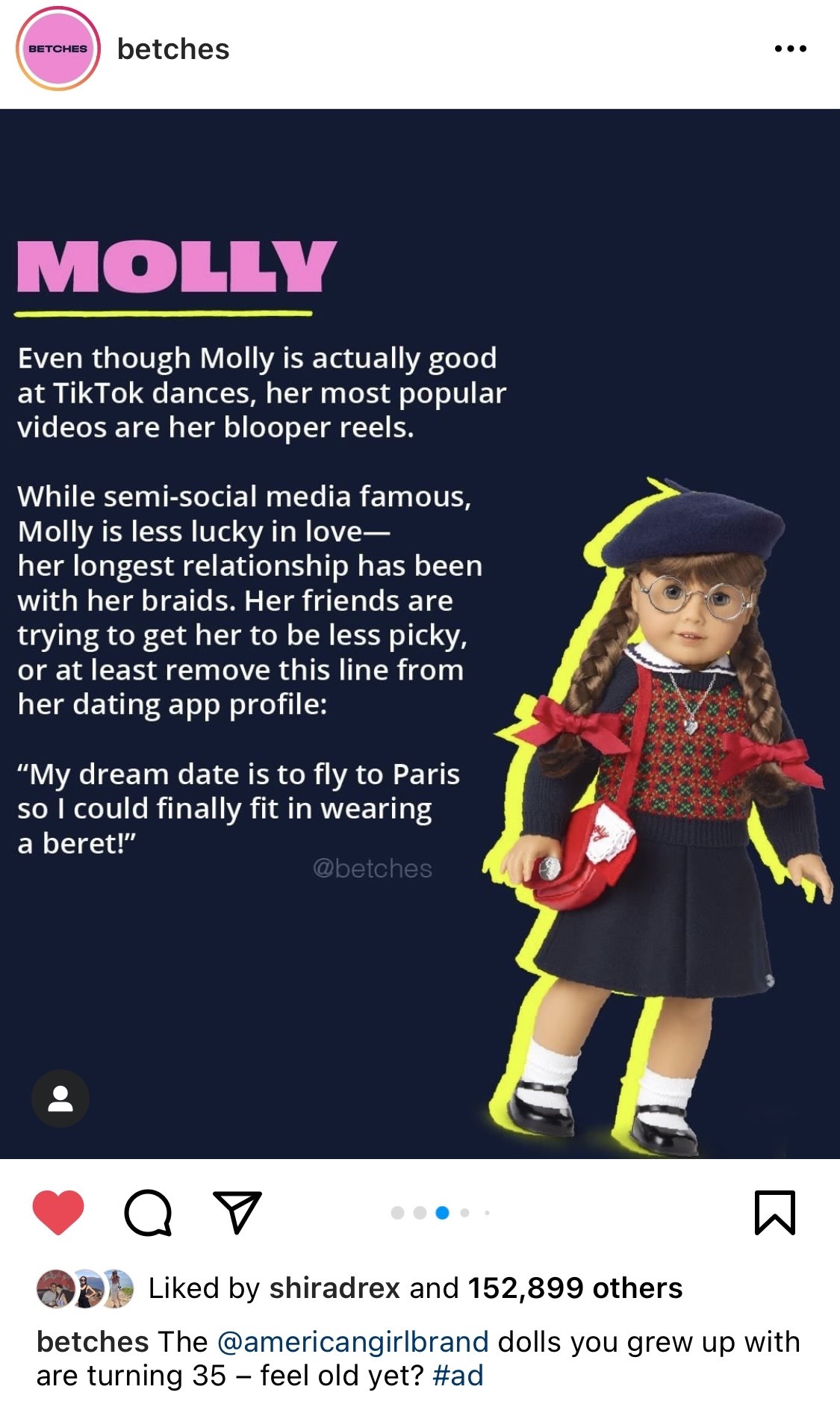 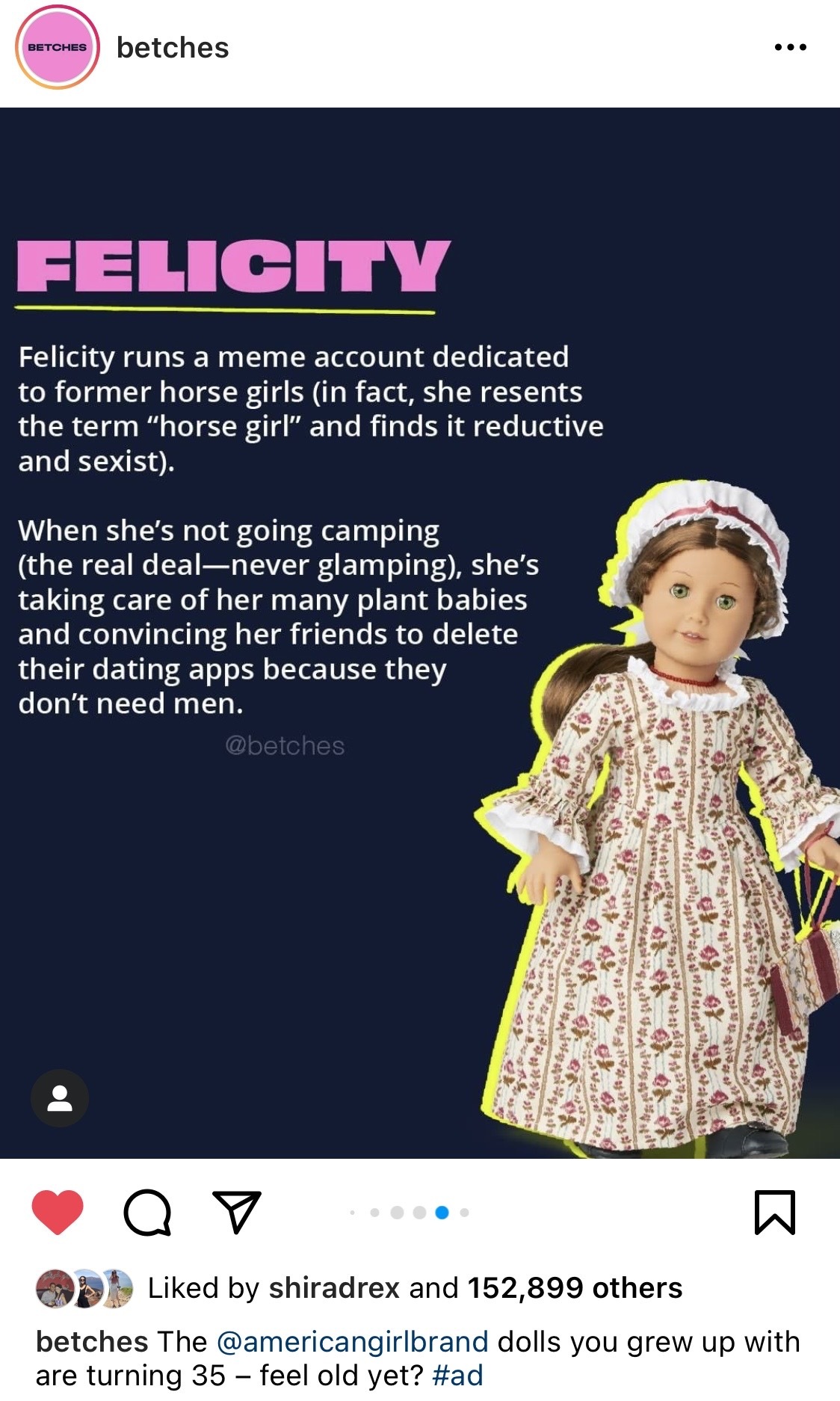