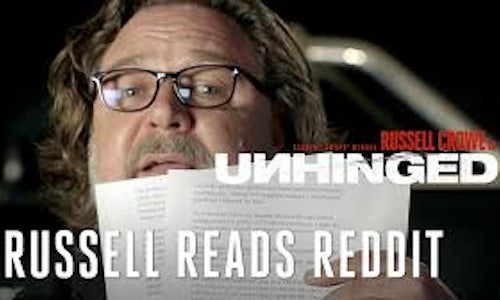 Most new studios with the unfortunate luck of launching during the middle of a pandemic would panic - but Solstice Studios isn’t most studios. They knew that Unhinged, their tentpole thriller about a man (Russell Crowe) pushed over the edge by the modern world, might take on some additional resonance during a moment when everyone’s on edge and everything feels terrifying. They just needed to find an approach anchored in the fun of movies rather than the dread of *gestures broadly in the direction of 2020* Fortunately, we knew just what subreddit to turn to.

Reddit is a place where the internet comes together to find answers to life’s toughest questions: Is my relationship healthy? Does anyone else feel like this? And, most importantly, am I the asshole? Well, we knew one person who certainly was - Russell Crowe’s unnamed protagonist in Unhinged. Maybe if we brought Russell together with /r/AITA, the sparks would fly.

So we asked Russell if he’d film himself reading some of our favorite posts to /r/AITA. The toughest part was picking our favorites - after all, /r/AITA has more than two and a half million subscribers who’ve shared hundreds of thousands of truly spectacular stories (plus god only knows how many equally incredible comments) over the years. But we made a few selects, packaged them up for Russell, and waited to see what we got back.

We reeled in a monster. Our clips helped propel Unhinged to #1 openings in eleven international territories before achieving the same feat here in the United States. Gratifyingly, our star really seemed to get a kick out of reading the subreddit’s best (and worst); if you’re an /r/AITA regular, know that Russell Crowe was definitely entertained. Most importantly, we got people to come back to the movies and gave people a taste of normalcy during a year that was definitely the asshole. 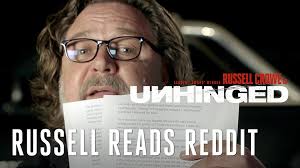