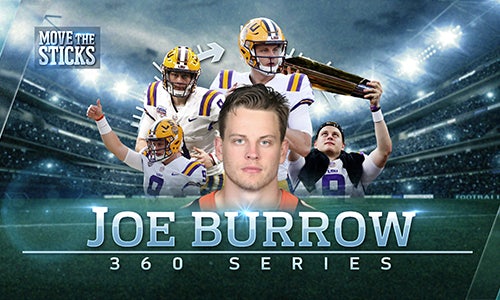 Released as audio shows between April 2 – April 16, 2020, The Move the Sticks 360 Series brings the stories of top incoming NFL rookies to life through interviews with the athletes and the people who know them best. Our objective was to introduce players whom we expect to be the future of the NFL to our audience in a way that casual and hardcore fans alike would enjoy. This year, the series focused on incoming quarterbacks Joe Burrow (video/audio), Tua Tagovailoa (video/audio) and Justin Herbert (video/audio).

Successful execution of this series reached an audience with a wide variety of interests, which is why our team provided a full breakdown of many aspects of each featured player’s life. The series discussed the X’s and O’s of the football, life hardships, family stories and how the players became elite NFL prospects.

Each year, our internal fan segmentation survey illustrates fans’ increasing interest in individual players over teams. In addition, football fans have shown an increasingly large interest in getting to know players off the field. Introducing young stars to NFL fans before they are even drafted by a team helps those fans build a lasting connection that will flourish regardless of where the player lands.

Collecting the 21 interviews used in this series helped us to create a blueprint for content creation at the initial onset of the COVID-19 pandemic. Beginning the project with a budget only a fraction of that of a traditional NFL profile or documentary show, our team began the process before the national shutdown by shooting interviews on DSLR cameras at the NFL Combine in Indianapolis and Justin Herbert’s pro day in Eugene, Oregon.

Once the pandemic hit, our team was forced to completely re-evaluate our production strategy in a work-from-home environment. Quickly discovering and utilizing StreamYard and vMix video/audio recording technology, our team resumed producing content before many other branches of NFL Media. Soon, we had gathered a wide selection of commentary from our featured subjects’ families, as well as coaches and teammates whose relationships with the subjects dated back to the players’ high school days.

NFL Media’s multichannel media portfolio and the large social media platforms of Daniel Jeremiah and Bucky Brooks are key components of our distribution. Each of the 360 podcasts was cut into extended video shows released on NFL.com, NFL Mobile and YouTube, while short bites were shared on social media.

The Move the Sticks 360 shows were also produced for linear television distribution. The video shows first debuted on the NFL Network during the week leading up to the 2020 NFL Draft. Following the success of these offerings, the shows were repackaged into post-draft versions of the 360 television shows, including reaction from draft night as well as additional analysis that focused Joe Burrow, Tua Tagovailoa and Justin Herbert’s fit with their respective teams. All of these elements directed users to the long-form Move the Sticks 360 podcasts that provide fans with complete, immersive experiences. With virtually all other sports cancelled at the time, the Move the Sticks 360 series sparked sports fans’ interest in the NFL stars of tomorrow.

Anchored by the highly regarded 360 miniseries, the Move the Sticks Podcast recorded 77% more listens in April 2020 than it had in April 2019. The 360 Series preceded an NFL Draft that broke several records in digital and linear consumption alike. In addition, the Move the Sticks 360 series helped to inspire the remote production practices that were used in several work-from-home show executions throughout the remainder of 2020 and into 2021. 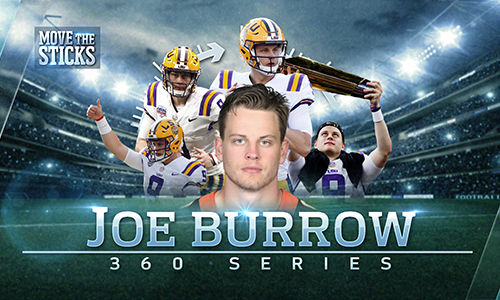