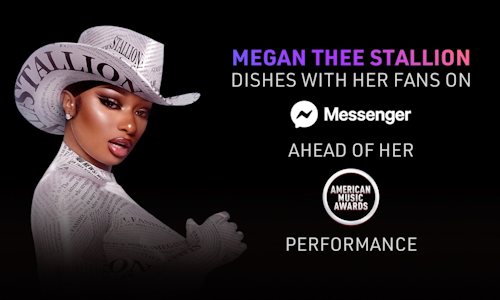 The American Music Awards (AMAs) is the world’s largest fan voted award show and each year brings fans and artists closer together. For the 2020 show, AMAs partnered with Facebook’s Messenger Rooms to unite fans and artists in a meaningful way during a year without concerts or IRL connectivity.

Facebook, in its partnership with AMAs producer Dick Clark Productions, identified Messenger Rooms as a priority product, as its development and rollout was expedited due to the pandemic. The AMAs team took a liking to Messenger Rooms because it integrates real-time, face-to-face video connectivity directly into the Facebook platform (no extra downloads needed), has no time limit on video calls, and is free to everyone. This activation provided an ideal opportunity for one of the first-ever uses of the product in a partnership capacity.

AMAs and Messenger created a once in a lifetime experience for a small group of selected superfans to meet their favorite artist, Megan Thee Stallion, utilizing the familiarity of the Facebook platform with the personal touch of the Messenger Rooms product.

Once well-versed on the product, AMAs identified a Messenger Rooms meet and greet with a show performer as a goal for 2020. Megan Thee Stallion was ultimately chosen for the collaboration, as there are few artists that have as strong of a connection with their fans (or in her case, her “hotties”). On the day of her “Good News” album release and with her debut AMA performance only two days away, Megan joined six invited “hotties” for a Messenger Rooms meet and greet, connecting with the fans from their respective homes.  By moving this unique experience into the virtual world, fans who may have never had the opportunity to participate in an on-location meet and greet were able to ask Megan questions about her recent album, her career, her inspiration, as well as share some of their “Good News” with Megan about events and challenges they were able to overcome in this trying year.

As fans gathered in the Messenger Room to await Megan’s arrival, they utilized the time together to socialize and joyously play her new music as the anticipation built. As soon as Megan arrived, the fans erupted with excitement.  Originally scheduled for 20 minutes, the conversation was extended by Megan Thee Stallion who ended up spending more than 35 minutes interacting with her fans. The quality and reliability of the Messenger Rooms platform helped create an enjoyable experience that undoubtedly fostered the extended participation.

AMAs hosted Megan in a backstage lounge at the venue to make the experience a seamless part of her super busy album release week. This partnership was supported with the extensive production and technical expertise of Telescope, Inc. which set up the backstage lounge for the fully remote production utilizing multiple cameras, lighting, and audio for a truly high-quality look and feel.

The fun and high-energy virtual interaction between the artist and her “hotties” helped build awareness of and drive tune-in for the upcoming award show – including Megan’s highly anticipated performance. Additionally, a 15 second clip of the Messenger Rooms meet and greet was featured on-air during the AMAs for the television audience of millions tuning in from home.

Utilizing Messenger Rooms, the AMAs and Facebook successfully powered a virtual VIP meet and greet that created a unique and intimate experience for Megan Thee Stallion and her fans. Just as fans crave connection, so do the artists who thrive on their fans’ energy. Adopting new technology to create opportunities for much-needed moments of connection that were severely lacking in 2020 was a top priority, and one that was definitely achieved. 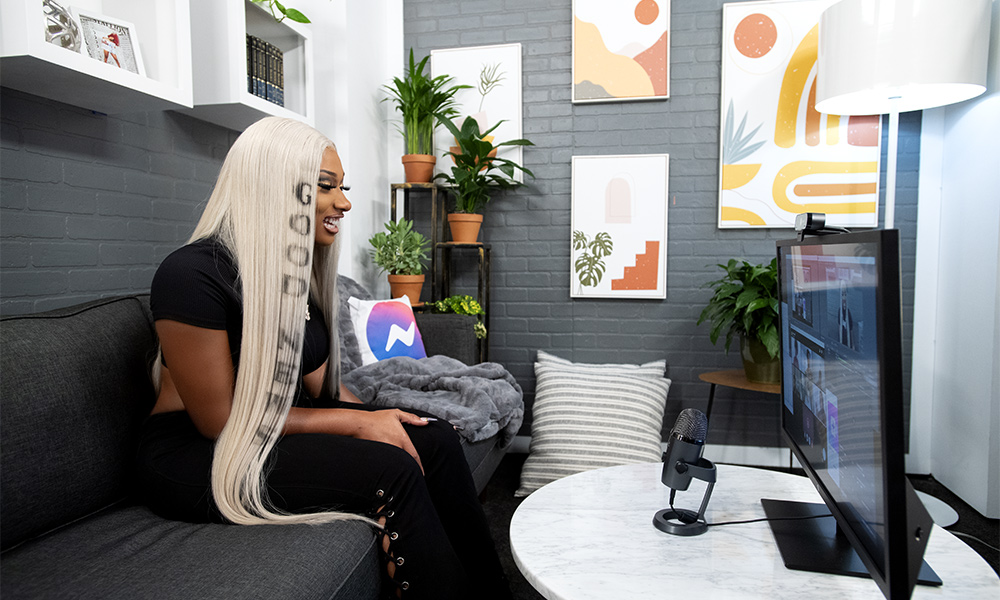 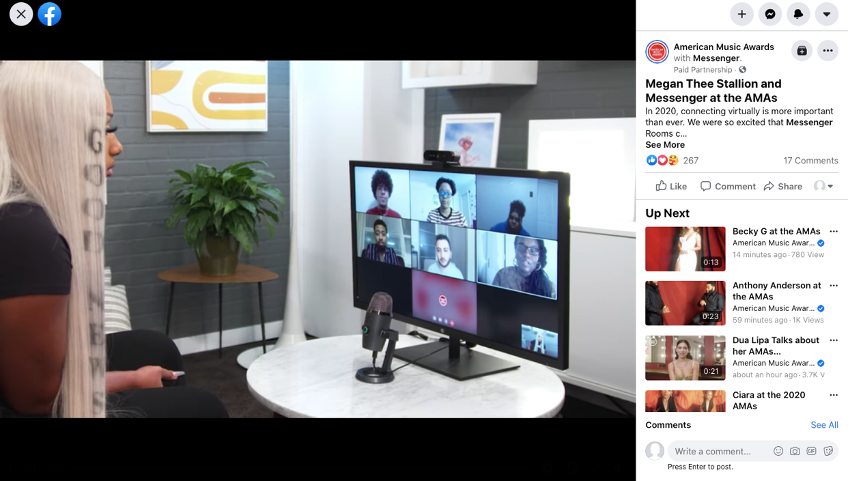 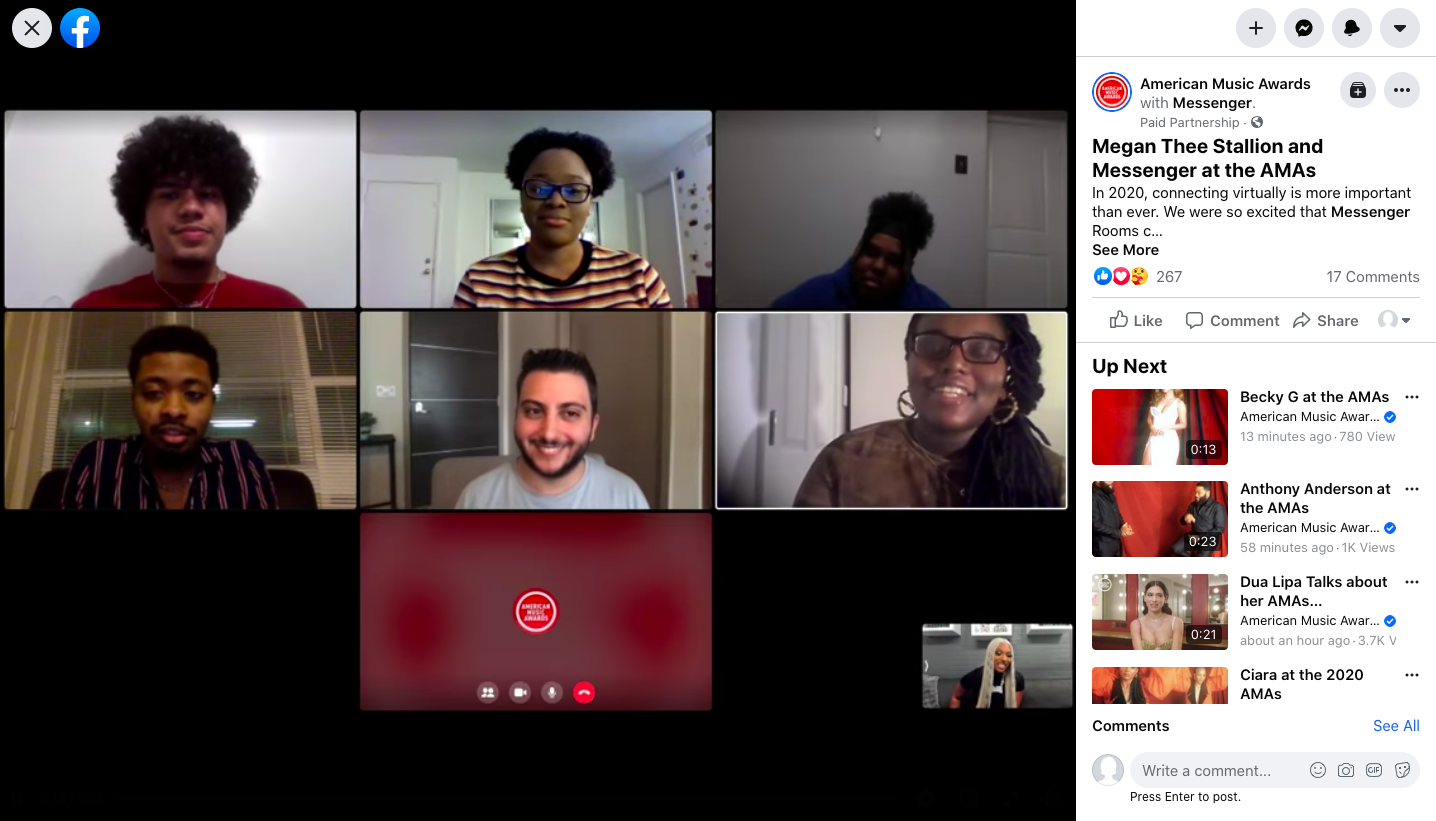 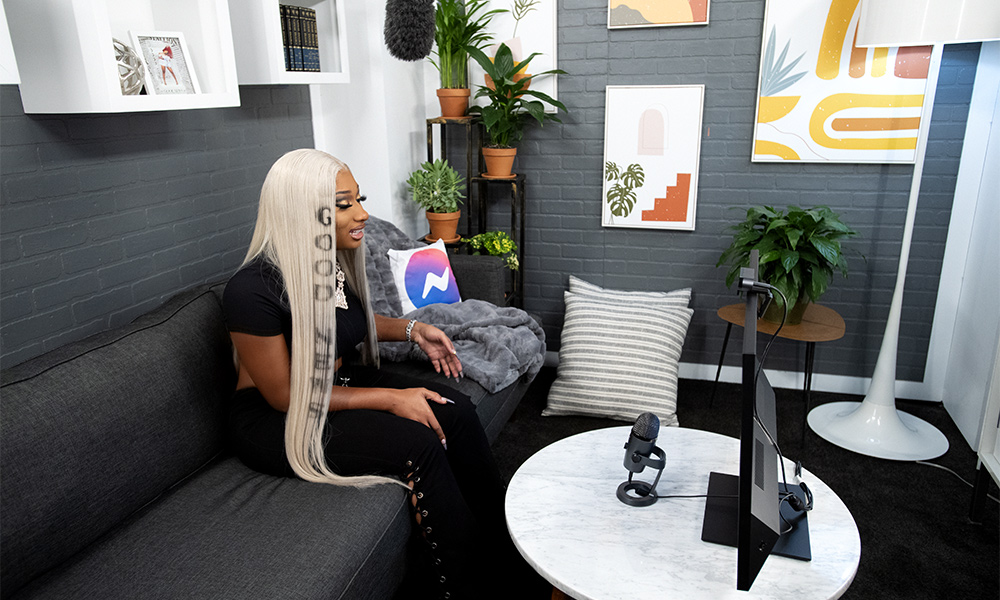 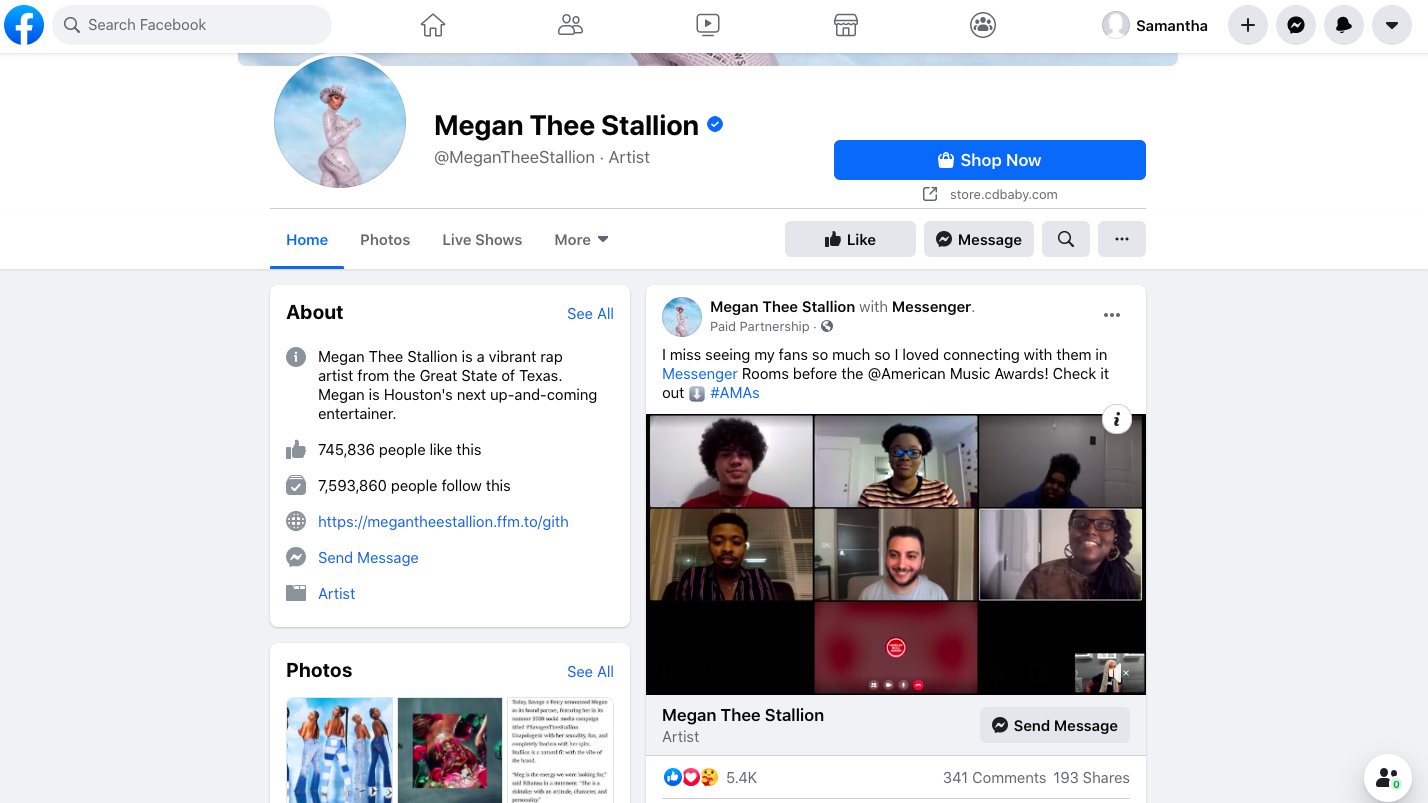 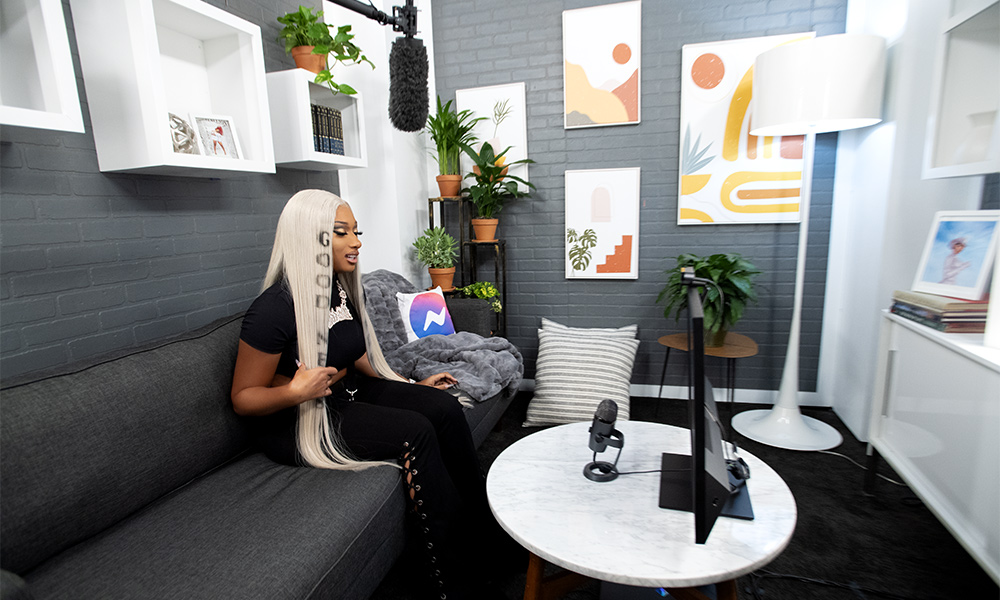 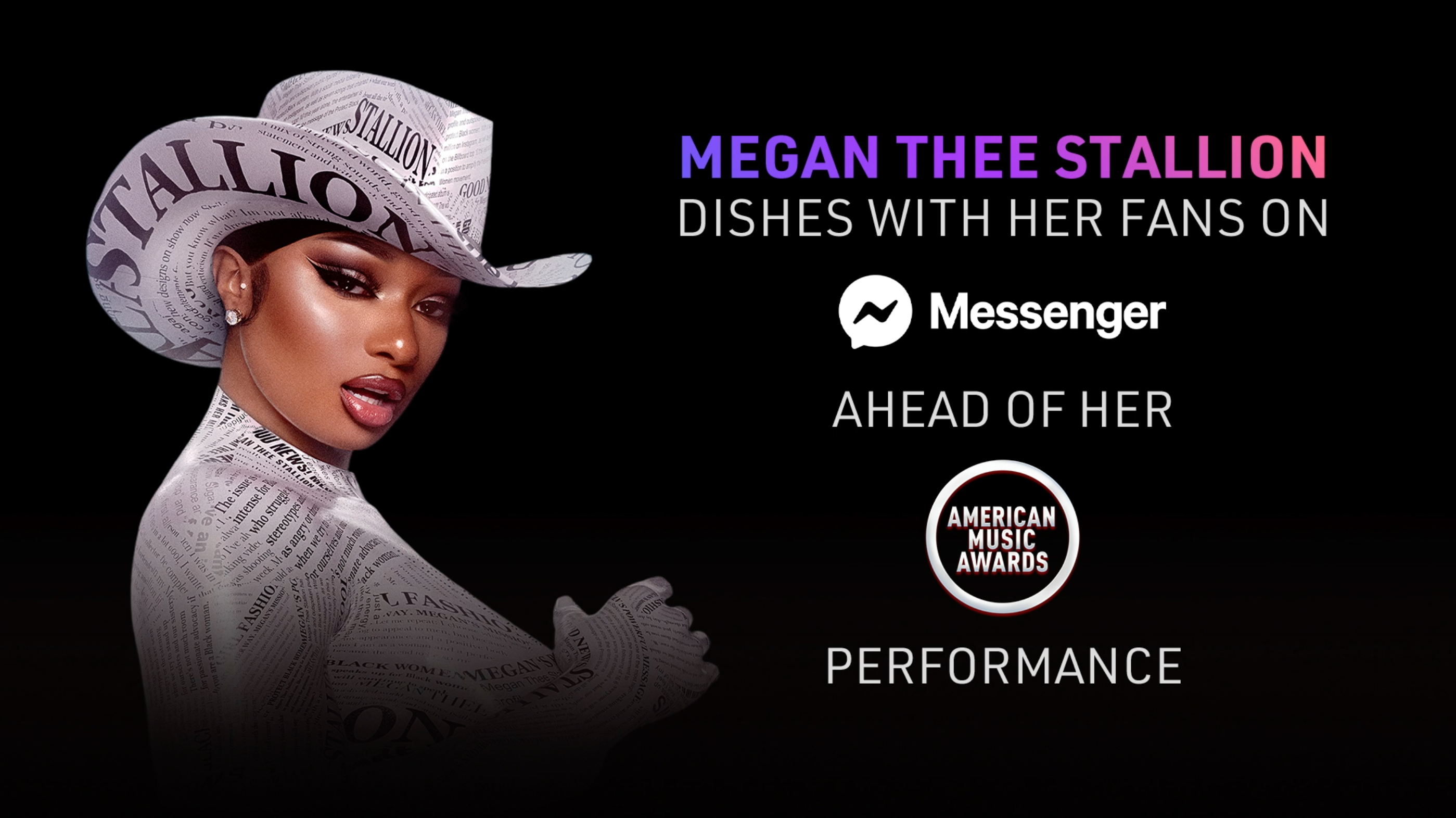