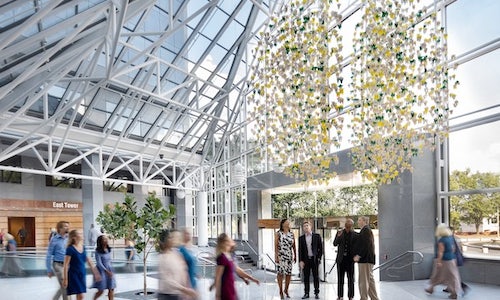 In 2018, Primrose Schools, a national early education and care provider, set out to create a campaign that would resonate with and celebrate Millennial parents, generating engagement and enrollment interest. After the success of the initial #LetGuiltGo activation, Primrose and Jackson Spalding teamed up again and joined forces with content marketing experts at Manifest in 2019 to continue the momentum around empowering parents – this time in a tangible way that would also translate well to digital and social channels.

The solution was a highly-visual, relatable, interactive campaign with a goal of reassuring working parents that no parent is perfect – and that’s perfectly okay. In addition to creating a meaningful path to engagement, this approach would position Primrose Schools as a supportive childcare resource that not only understands the needs of children – but also the demands of being a working parent.

Our approach was informed by the understanding that guilt is an incredibly powerful emotion that affects most parents and research findings about our target audience, which indicated:

Drawing on inspiration from two ancient phenomena – tashlikh, the Jewish tradition of symbolically casting off mistakes or regrets, and the Japanese legend of Senbazuru, folding paper cranes as an act of healing – we created a tangible way for parents to set themselves free of parent guilt to serve as the centerpiece of the activation. Parents were invited to reflect on their perceived shortcomings by writing thoughts on paper that would be folded into individual origami and transformed into an art installation. The result was a beautiful reminder to parents that they were not alone.

We identified a high-traffic office building that would serve as the headquarters of our operation for confidentially collecting parents’ reflections on guilt and serve as the backdrop of the art installation. We commissioned local artists to carefully fold and string together the individual pieces of paper to represent the collective letting go of parent guilt.

The art installation – combined with an emotional video, interactive microsite, compelling social content and media outreach – resulted in an integrated campaign that shared the gift of letting go of guilt with parents across the country.

From the in-person to virtual experience of the #LetGuiltGo campaign, the message clearly resonated with working parents. Beyond the 6,000 pieces of origami that comprised the art installation, results highlights included:

Beyond the initial results, insights from the parent survey will allow Primrose to better understand its target audience and will inform content moving forward. 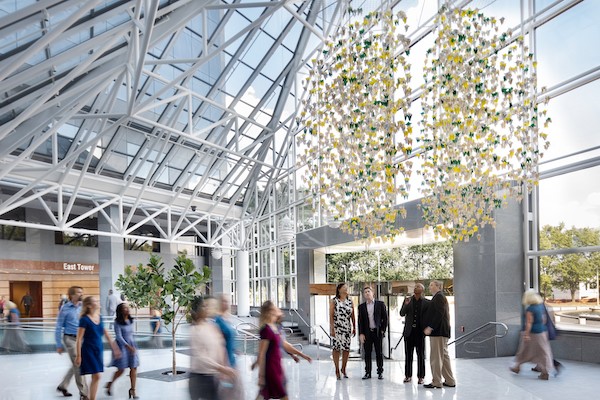 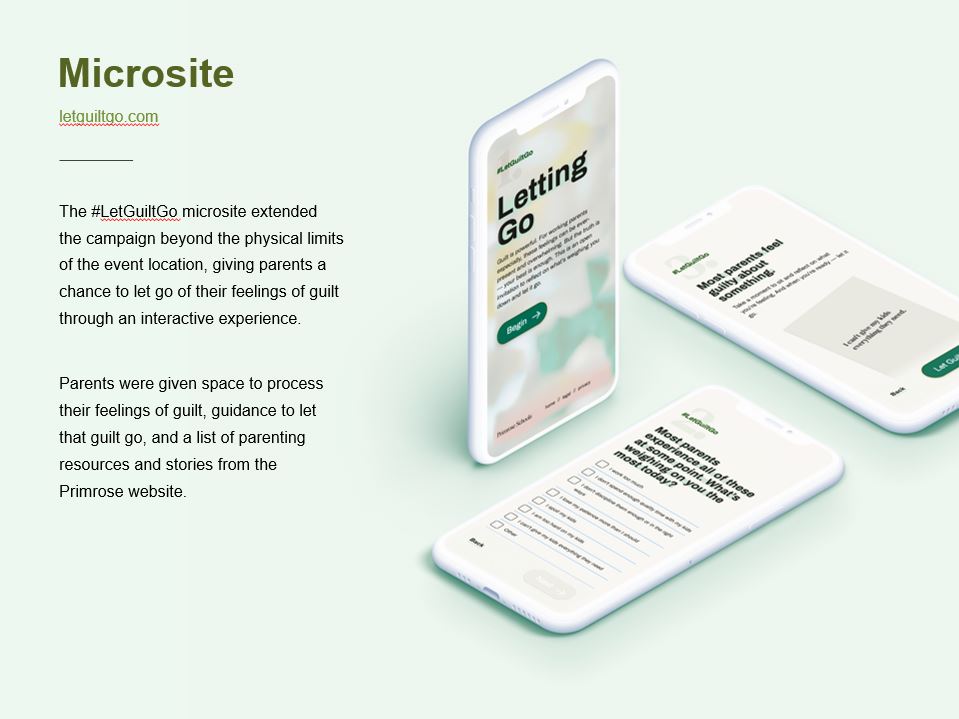 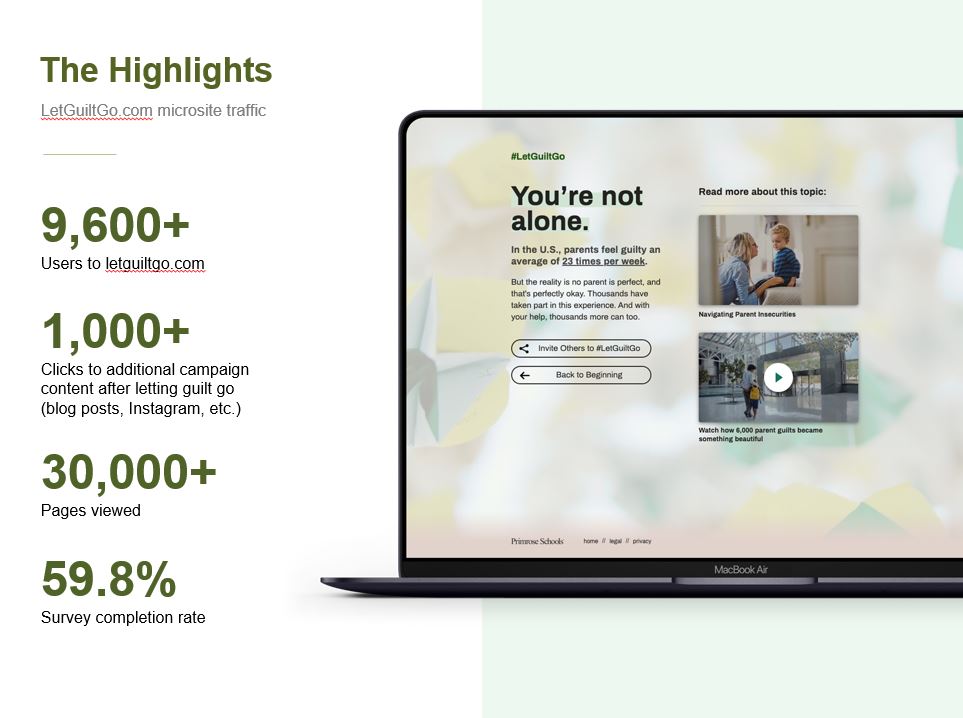 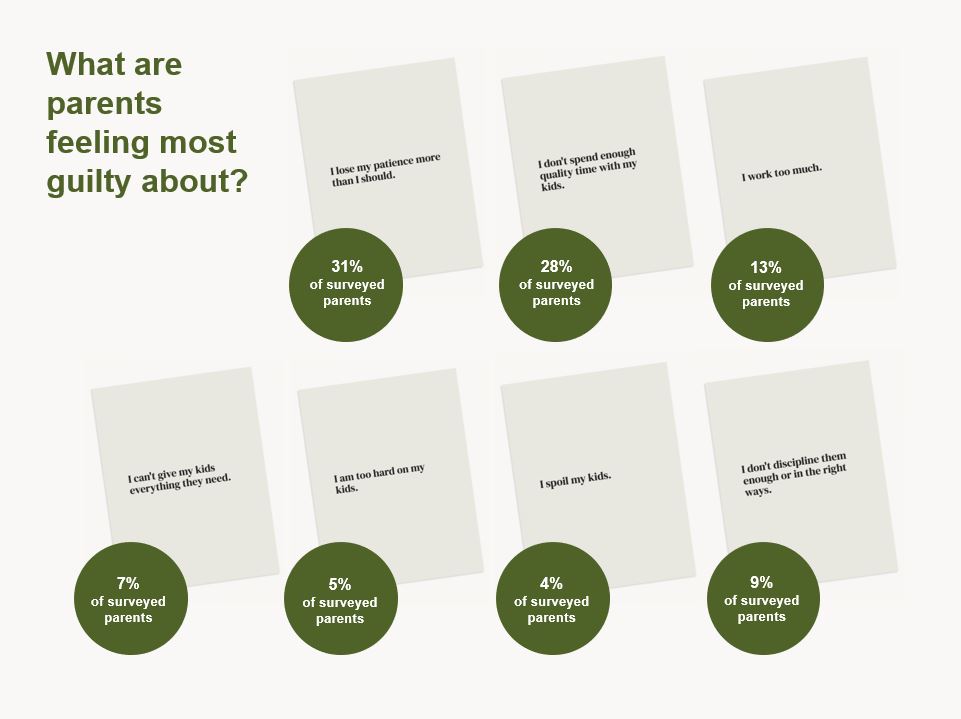 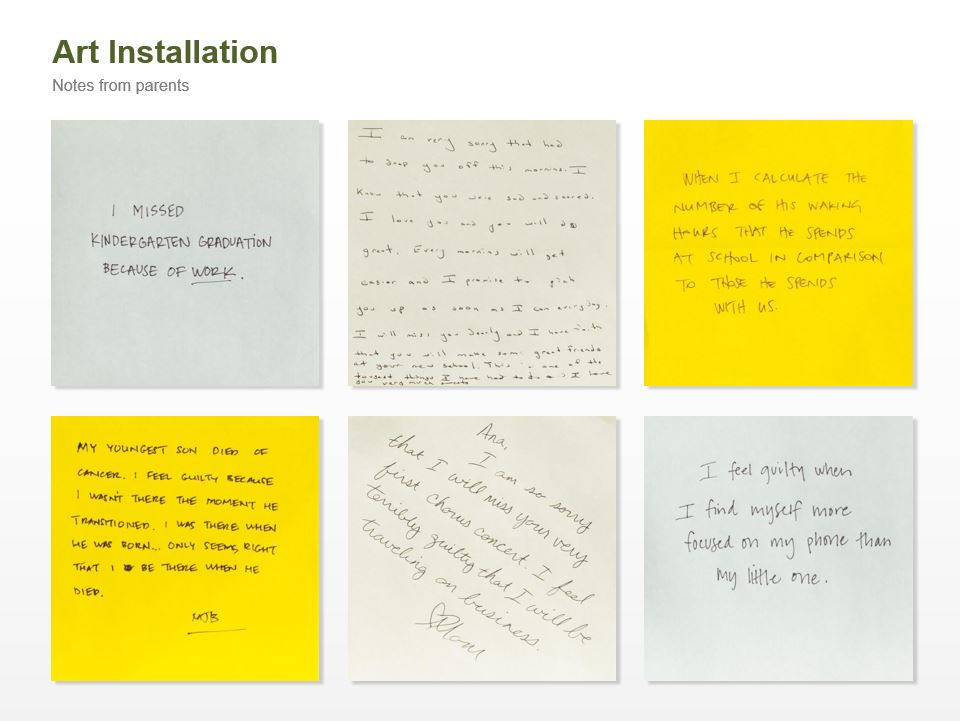 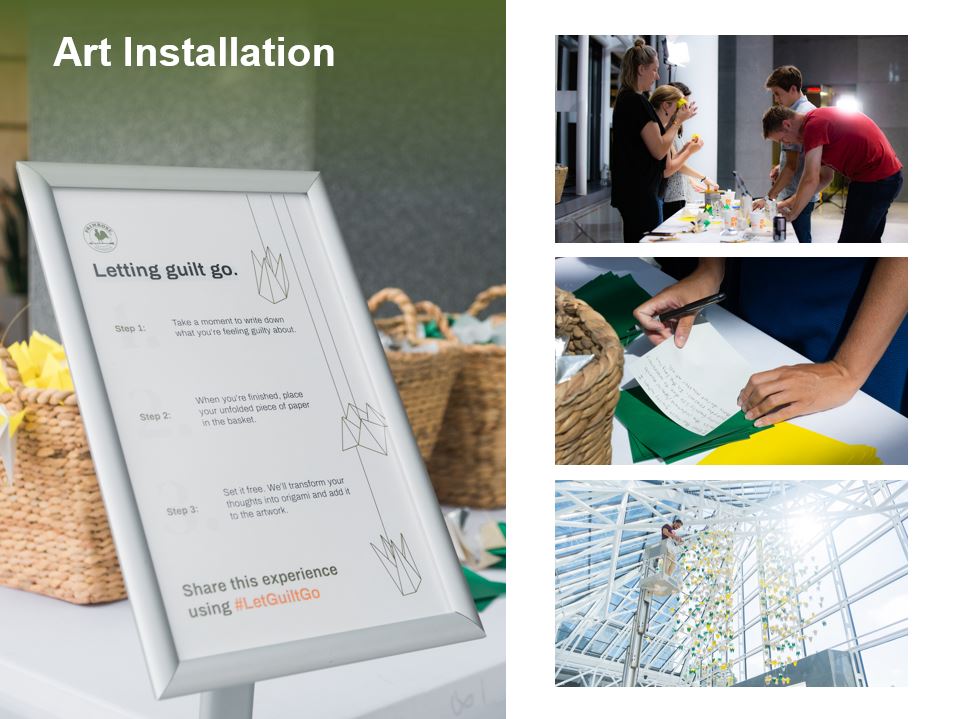 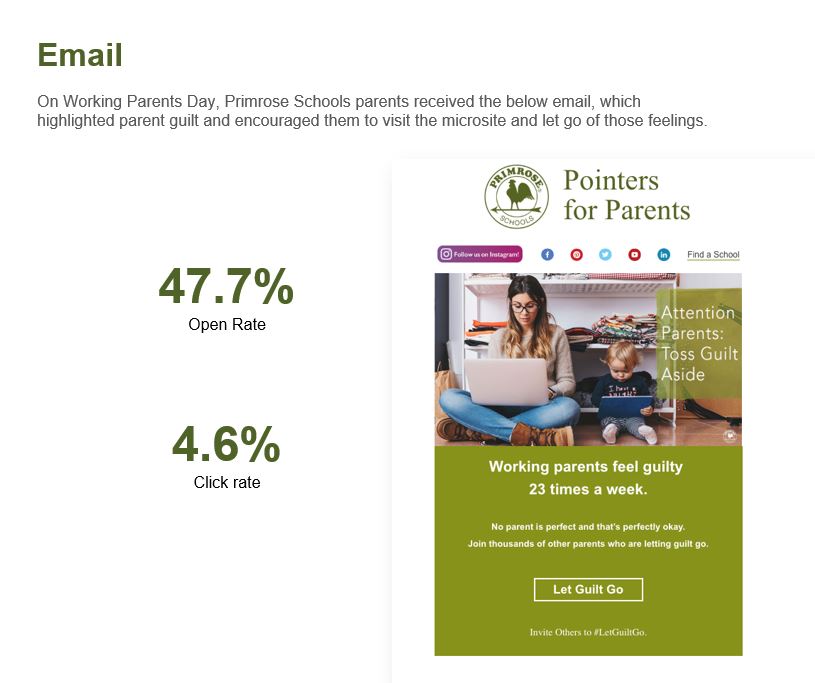 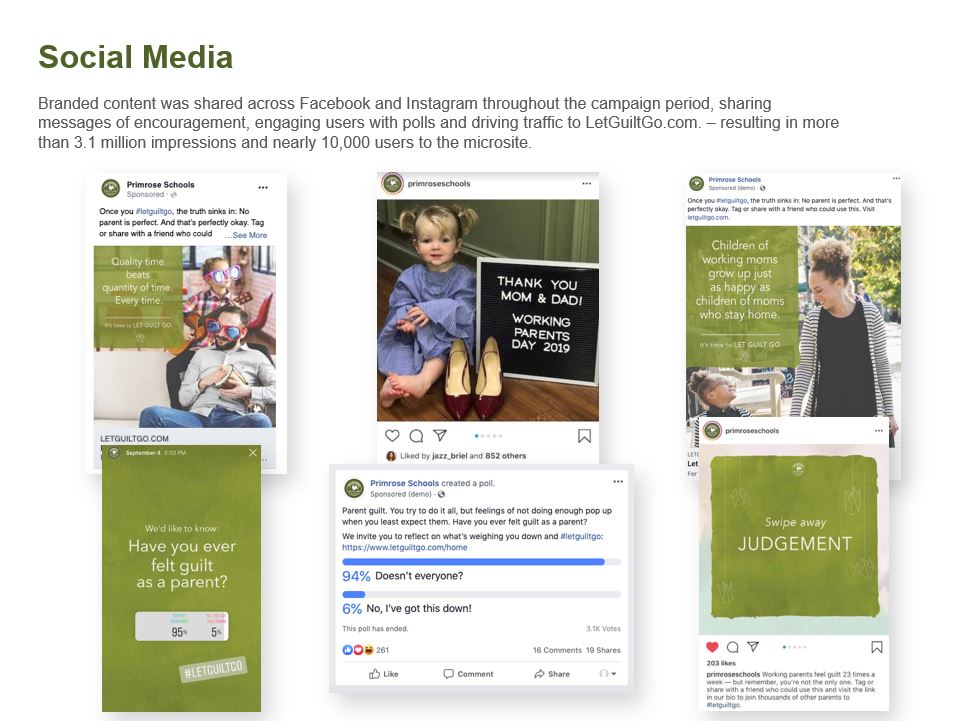 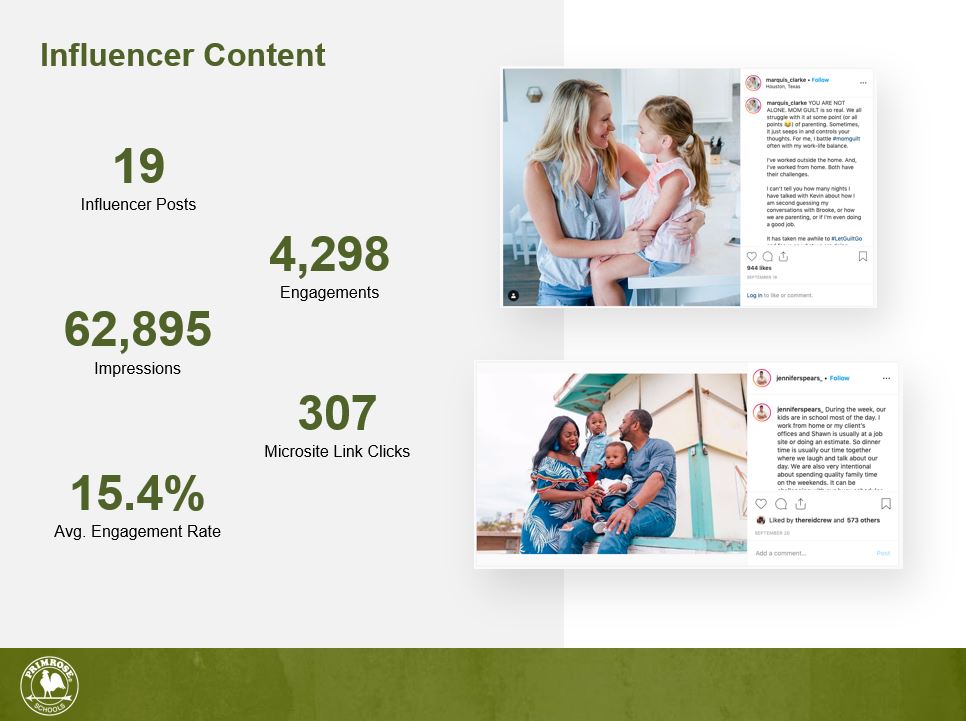 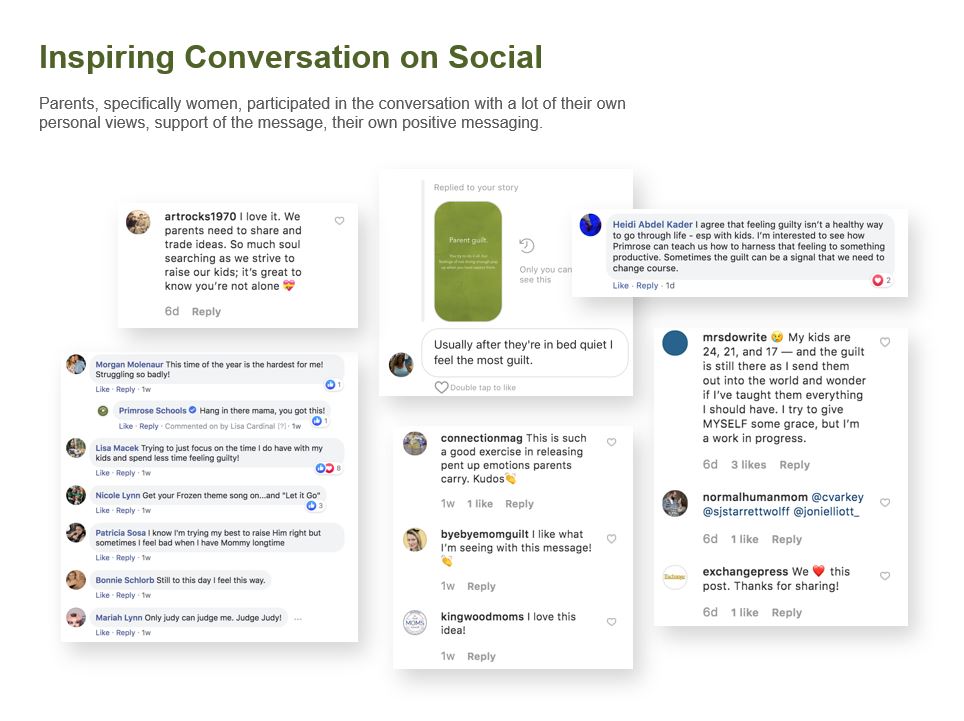