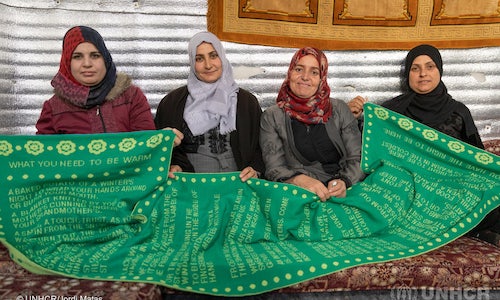 Every winter, millions of Syrian refugees risk being literally left out in the cold.This year, Twitter for Good and UNHCR, the UN Refugee Agency, joined forces to do something about it. Through an innovative project coined #KnitForRefugees, they launched an awareness and fundraising campaign with a unique twist: creating the first-ever scarves made from Retweets.

In a series of offline and online events in Dubai, New York, Mexico City, Brasilia, and Geneva, signature Tweets for each region of the world were launched throughout 2019. People on Twitter could then retweet those designated posts with the opportunity to get their @name physically knit into a scarf. The scarves were knit with the help of Kniterate, a startup offering knitting machines that take digital designs and knit them into real garments. Each Retweet also initiated a personal invitation to donate to winter fundraising appeals.

The project culminated with a special scarf activation featuring a crowdsourced poem written by acclaimed author and UNHCR Goodwill Ambassador, Neil Gaiman. The poem was the result of Neil’s curation and interpretation of more than 25,000 words of inspiration generated by Twitter user’s responses to Neil’s simple question: what reminds you of warmth? Neil’s poem was then paired with a special border design created by Syrian refugee women living in Jordan and was unveiled during a special live Q&A from the Twitter UK headquarters in London.

Nearly nine years into the conflict in Syria, the world’s largest refugee crisis runs the risk of falling victim to media fatigue. And while the war makes the headlines, for refugees, winter can be as deadly as the bombs that drove them to flee their homes. #KnitForRefugees saw three unique and distinct partners bring innovation and expertise from divergent areas to both generate awareness and to give audiences an outlet for helping to provide lifesaving relief without putting their iPhone down. With the help of designers, strategists, fundraising experts, and some of the best social media minds in the business, the group took on a global challenge with the goal of reaching the masses to both spread the word and spread action.

After a brief planning period, the first signature Tweet was launched roughly one week following World Refugee Day in Dubai. The Tweet was published on the @Refugees Twitter handle and was quickly retweeted by the project partners. The first line read “Humanity is the thread that binds us.” The phrase became a mantra for the project, with audiences speaking dozens of languages in every corner of the world using their Twitter handles to spread the positive message and create change. After six months and activations throughout the Middle East, Europe, South America, and North America, thousands had retweeted, including Twitter founder and CEO, Jack Dorsey. Over the course of a six-month period, thousands more would join them, including UN leaders, high profile voices (such as Ben Stiller, Kristin Davis, Jillian Michaels, Amanda Palmer, Khaled Hosseini, and Monica Lewinski), media outlets, aid workers, activists, and citizens from around the world speaking with one voice. Using a third party and Twitter’s API, every person who tweeted was issued an immediate reply from @Refugees or a language-specific counterpart giving the opportunity to donate.

Riding the wave of success in the project’s formula of driving Retweets, awareness, and funds, the initiative's finale needed something big. Enter award-winning novelist Neil Gaiman. With a simple question, Neil Gaiman signaled to his millions of followers that he needed help with the special project. They responded with more than 2,400 suggestions of what ‘warmth’ meant to them. From these elements, Gaiman created, What You Need to be Warm.

The poem brought the campaign to the next level with user-generated content and hard media stories further catapulting the project into the public spotlight. The big reveal of the scarf with the crowdsourced poem on it happened in Twitter UK’s London Office and was accompanied by a special Twitter Q&A that neither fans nor Neil wanted to end. Each of the scarves from the various regions were displayed together at the first-ever Global Refugee Forum at the United Nations in Geneva in December 2019 where Presidents, Prime Ministers, Fortune 500 CEOs, and refugee representatives could learn about the projects and see the final result. 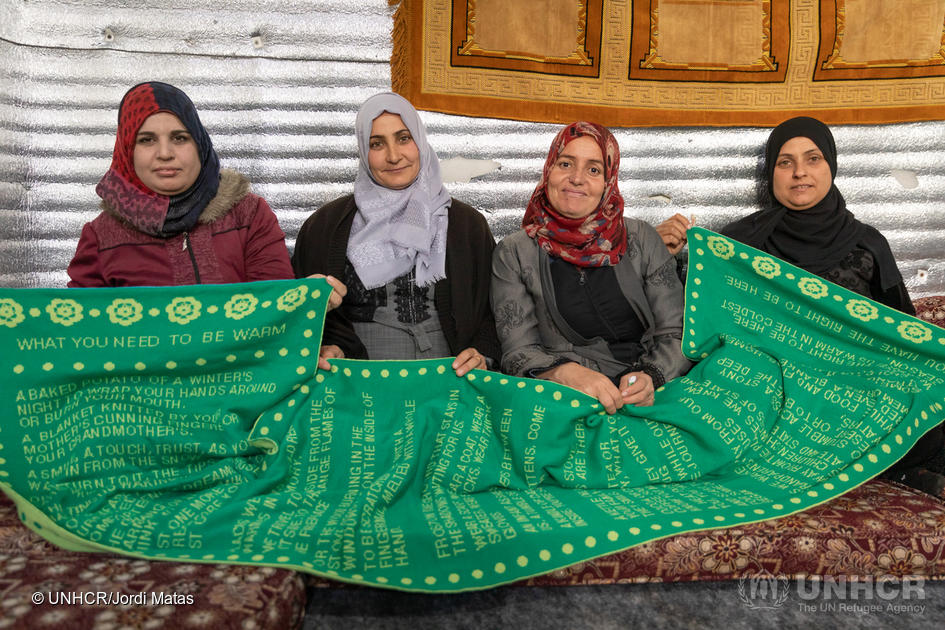 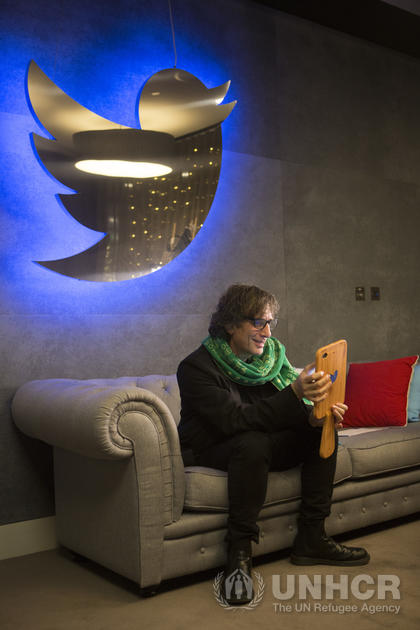 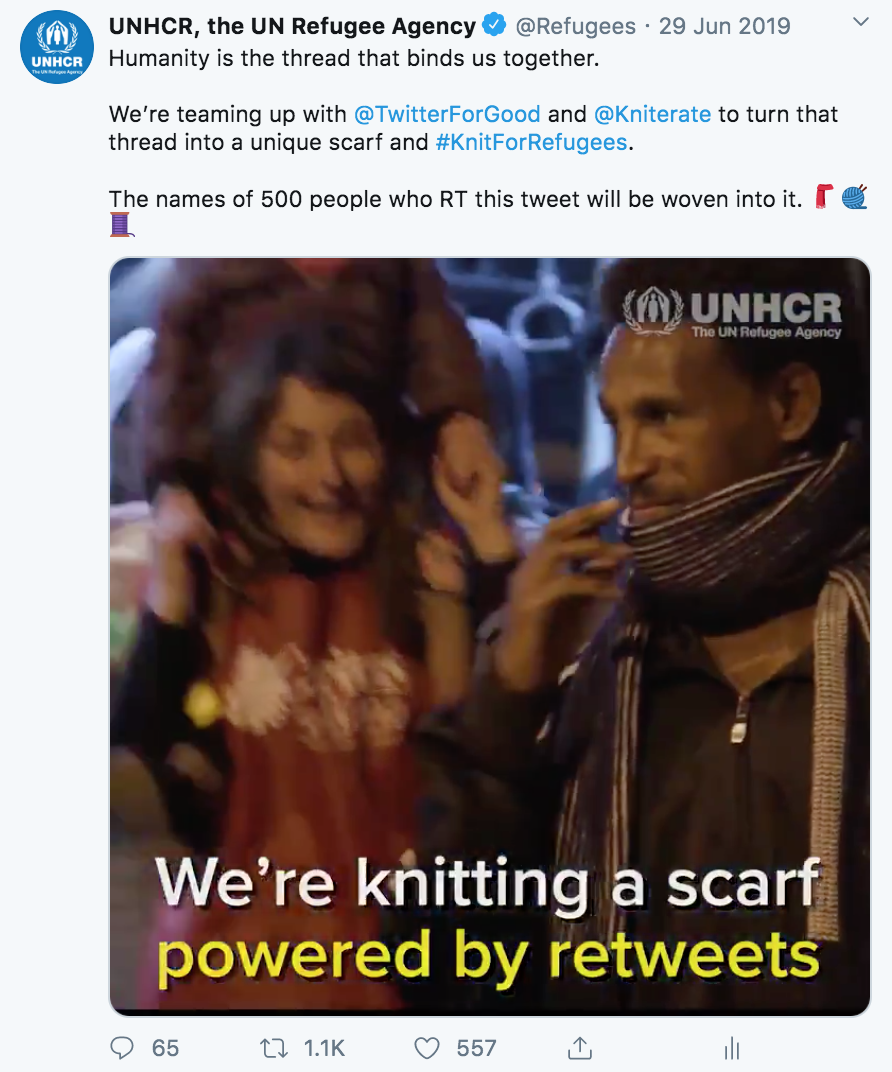 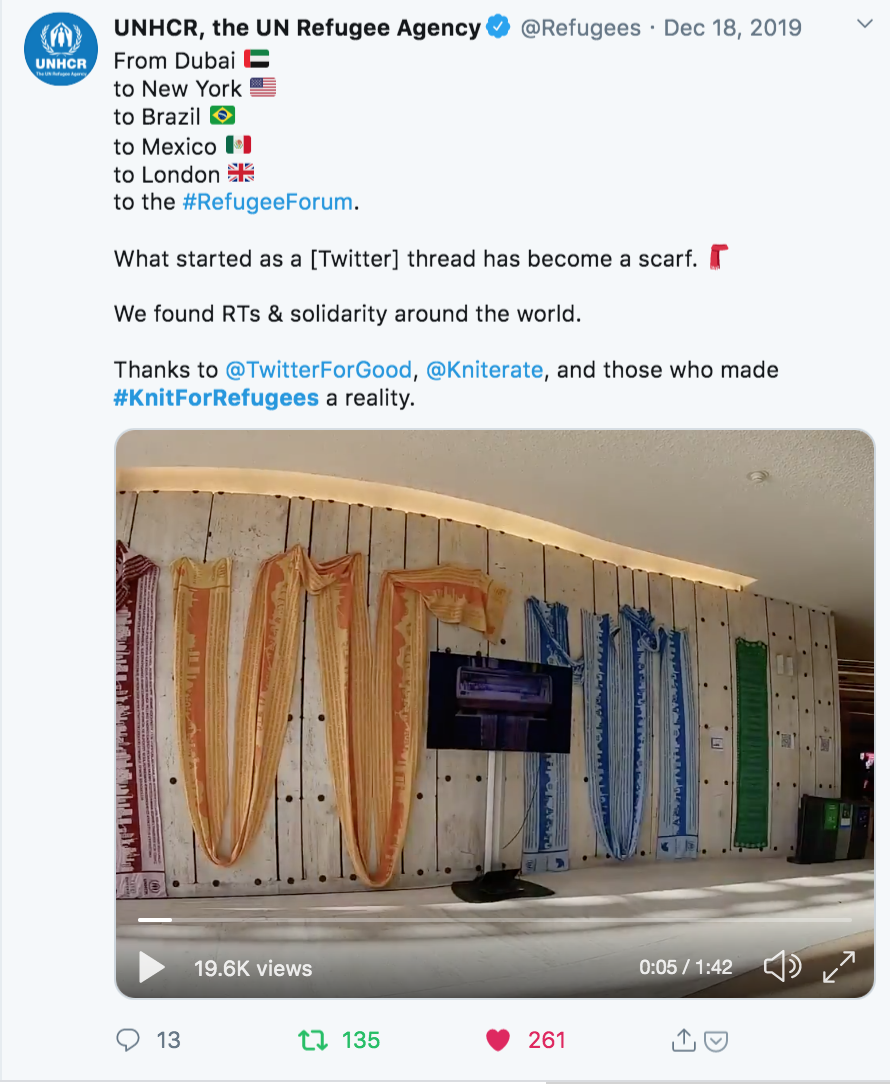 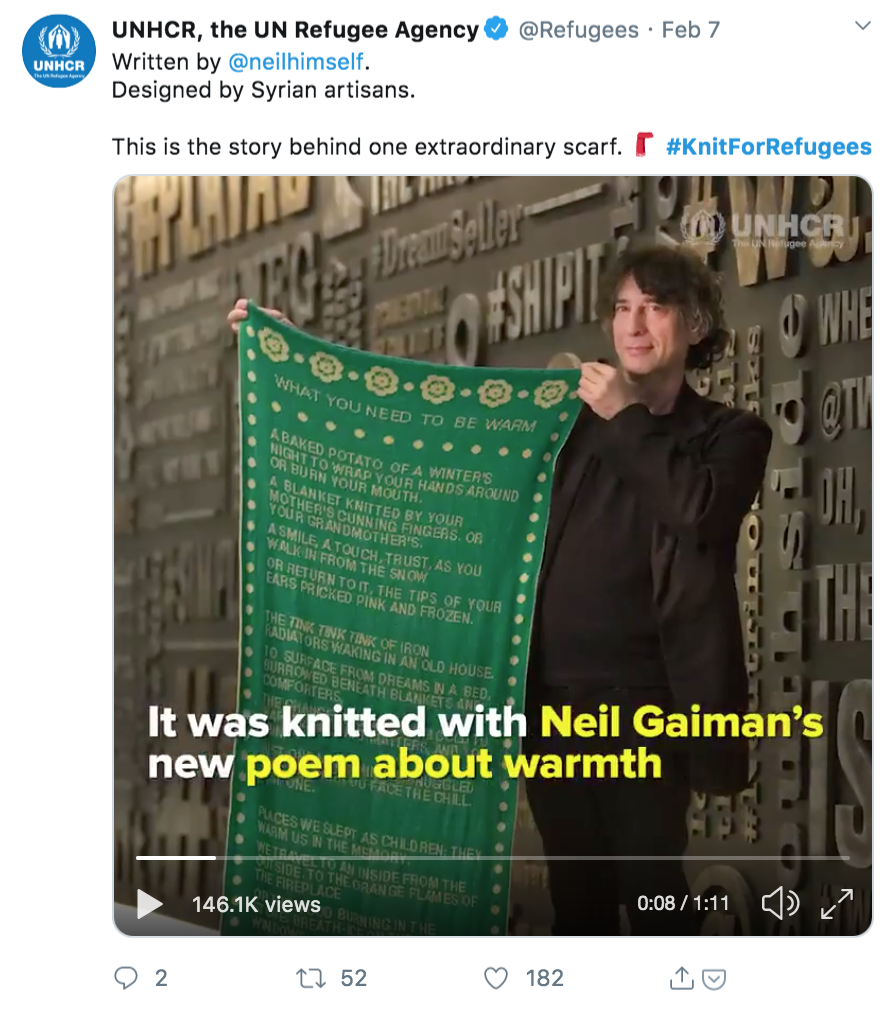 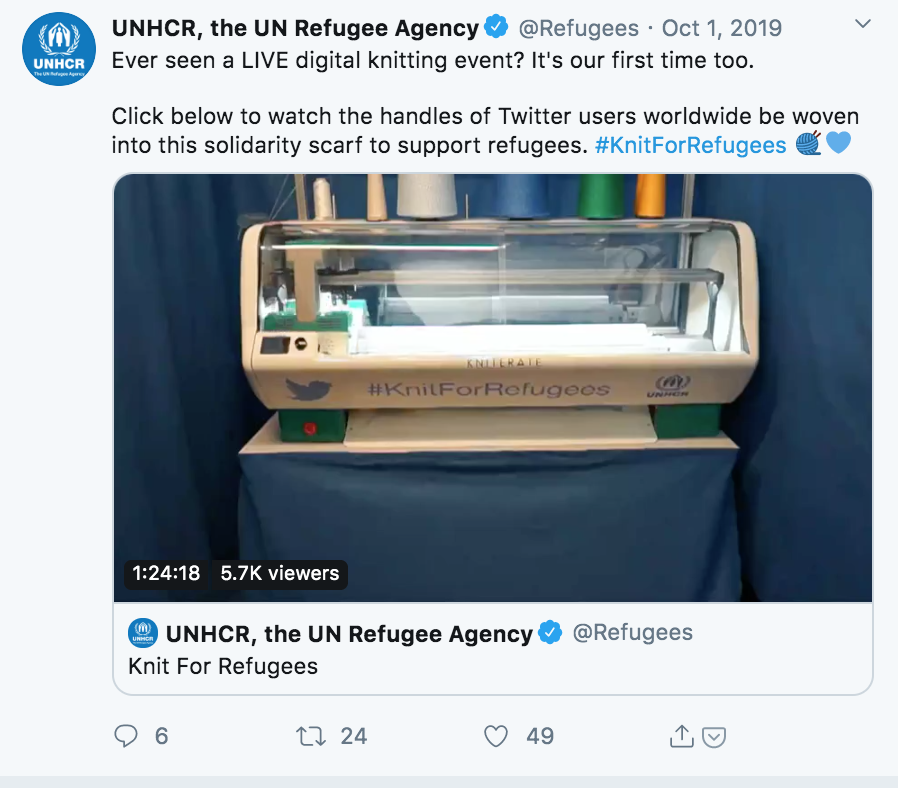 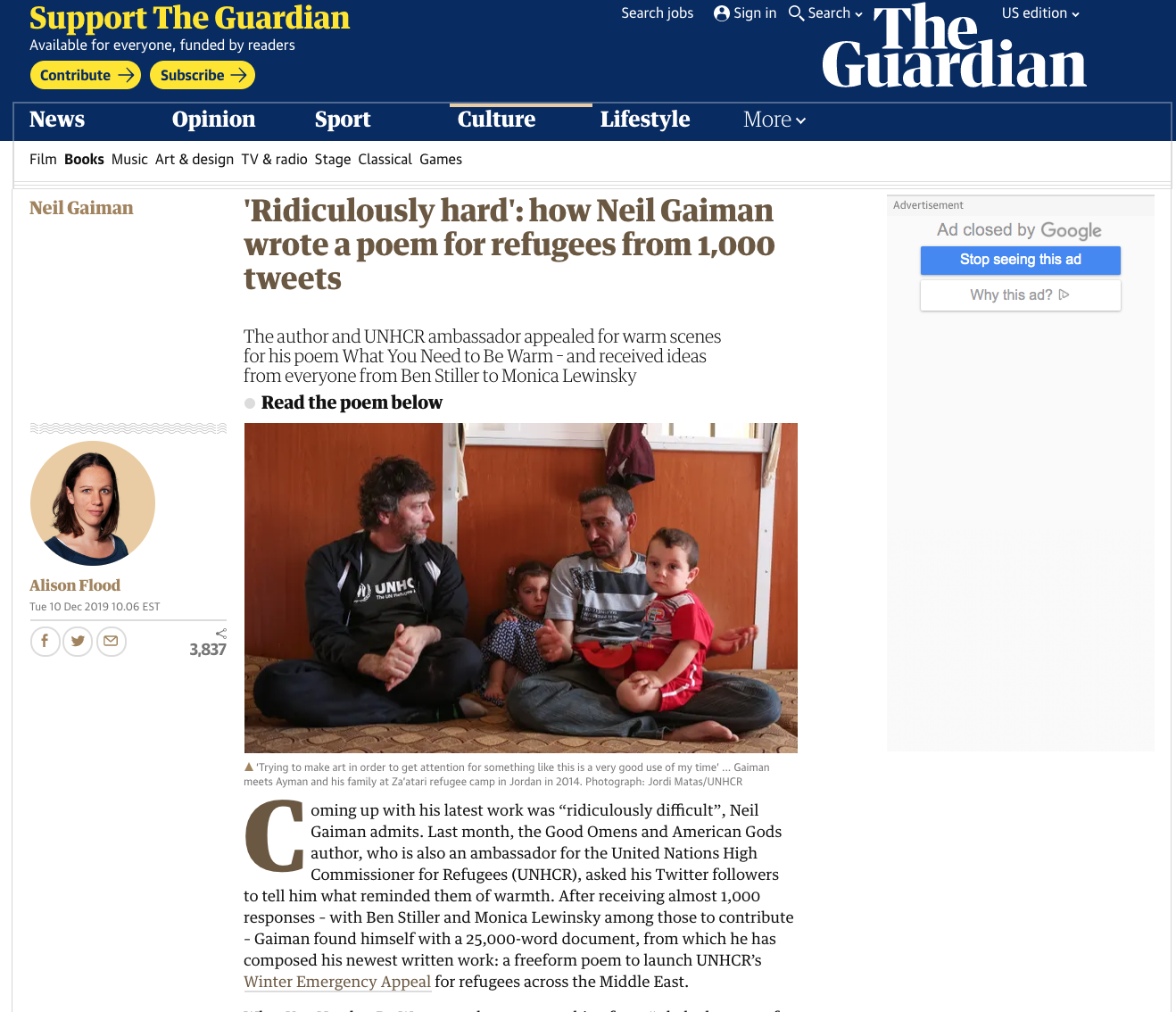 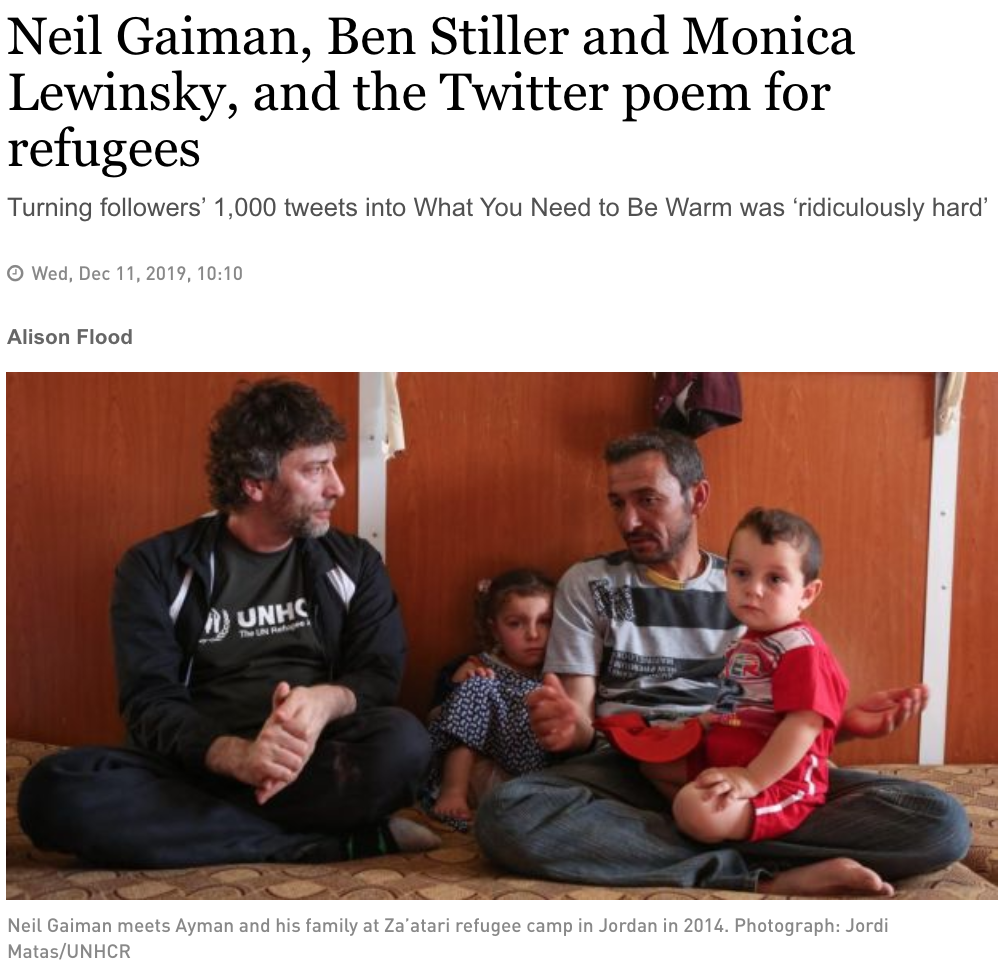 UNHCR, the UN Refugee Agency, Twitter for Good, and Knitterate