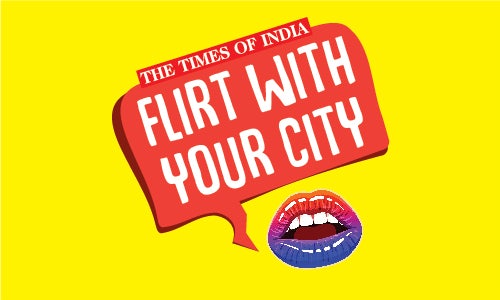 The Times of India - Flirt with your city

The Times of India (India's leading English print daily) was facing the global category challenge; the young have chosen social media over the newspaper.

With an array of digital news sources and constant updates, newspaper readership and relevance of the newspaper both declined among the youth.

This in turn negatively influenced RPC (Readership per copy), which measures how many people in the household are reading the paper and advertising revenues.

With this trend in motion, newspapers and especially English dailies faced impending doom in the not too distant future. Therefore, our two-fold objective was:

1. ENGAGE WITH YOUNG DIGITAL NATIVES ON THEIR TURF AND LEAD THEM TO THE PAPER

The young today tweet, like, post, swipe; they don't have time for newspapers. To connect with them, The Times of India re-imagined its Metro Supplement (TIMS). The young take pride in being 'first to know' but often stop exploring things about their city sticking to the same old hangouts. The shiny, new TIMS was a unique, youth-relevant curation of hyperlocal news, popular culture adding spark back into their relationship with their city. Resulting in: 'Flirt with your City'.

Bollywood celebrities, regional superstars, pop-culture icons joined in; leading to higher reader engagement. Celebrities shared exclusive scoops on how they flirt with their city, going on flirt trails, activating fan bases to follow suit. They created their own version of the flirt raps, called all-star raps. Readers created their own version of the rap encouraging us to tie-up with Dubsmash to put out shorter versions for engagement. POP icons put out challenges like dance flirting and their fans couldn't help interacting.

Content flowed seamlessly between digital & print newspaper; thanks to innovative initiatives- city flirt, best kept secrets, flirt crosswords featuring in the leisure section of the paper. Twitter was used to ignite intercity banter. Facebook, Instagram played a crucial role in getting users to share their stories of city-flirting. When readers started seeing their own pictures & stories being featured in the newspaper, they took pictures of them being featured in the paper, posting back on digital. Thus, starting a self-sustaining chain of Print-Digital-Print content flow!

The campaign was a connected storytelling across mediums. Videos were released as customized content pieces rather than ads on Radio, Youtube, Music channels, Multiplexes, Hangouts.

FROM FLIRTING TO FALLING IN LOVE

The social media handles of TOI including Facebook, Twitter, YouTube, Instagram created quite a storm with plethora of consumer engagements (likes, comments and shares) the moment the campaign was released. The campaign reached 2.5bn+ as videos garnered more than 55mn+ views, 3.5bn+ impressions. Twitterati showered enough love for #flirtwithyourcity to become #1 trending topic. As for today, the Instagram count stands at a significant 8500+. With more than 50% of the content consumed by the vulnerable 13-24-year-old consumer segment across cities; the campaign, sure, made a huge impact. What started with 5 music videos ended up being -16,000+ content pieces taken back to paper. We did not need brand ambassadors, we had made the readers our endorsers.

They didn't just interact with the campaign, they talked about it and created their own content. While the engagement numbers shot through the roof, the campaign also achieved real behavior change.

While there are great engagement scores to showcase success, the most heartening for the entire category is the discovery of a new way to connect with the youth. The latest brand track reveals an increased preference and 'read yesterday' metric. Given that there was no other national initiative during the period, a large proportion of the swing can be attributed to the 'Flirt with your city' campaign. TOI achieved successfully achieved its target with paramount increase in brand affinity and readership.

Video for The Times of India - Flirt with your city 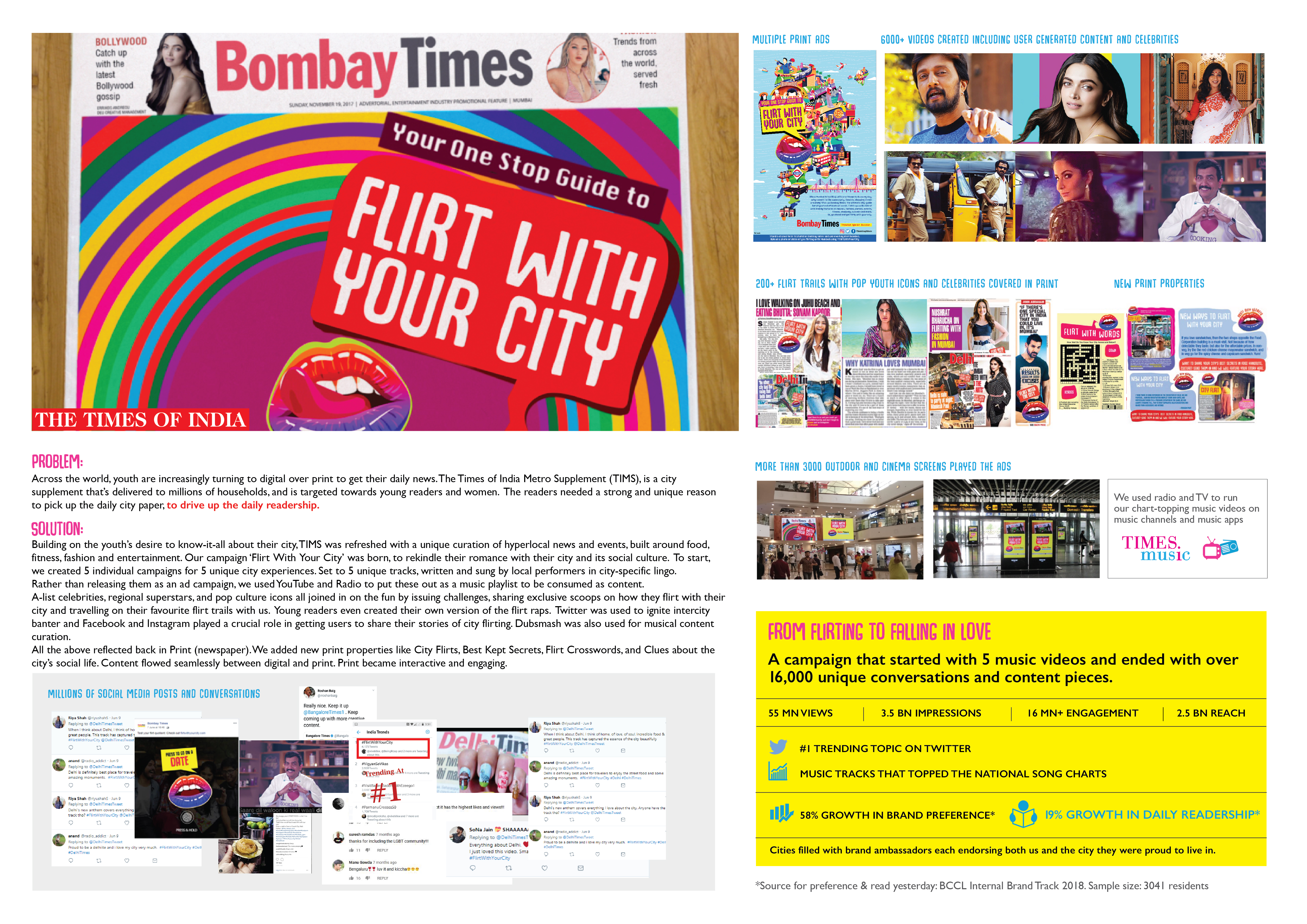 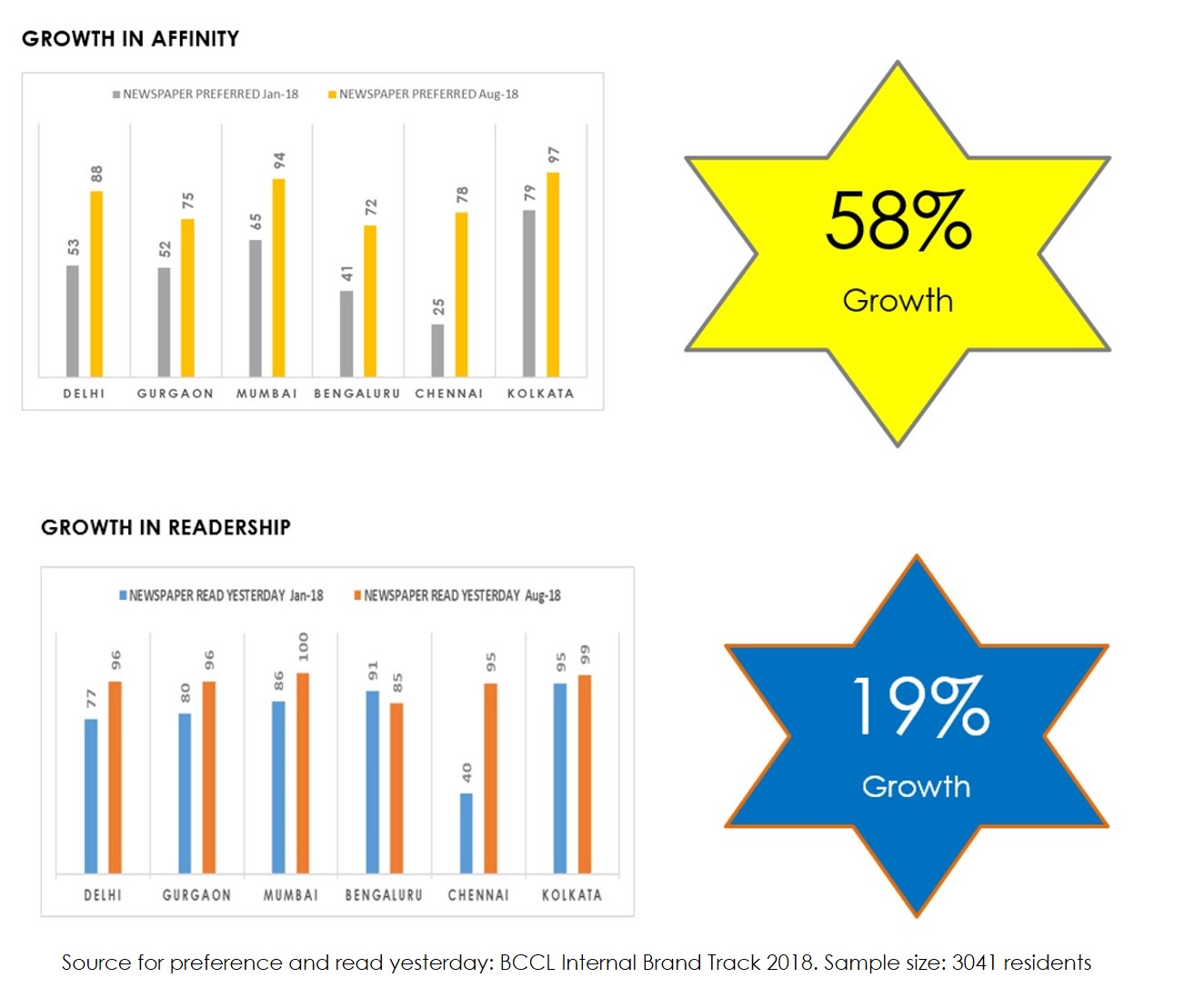 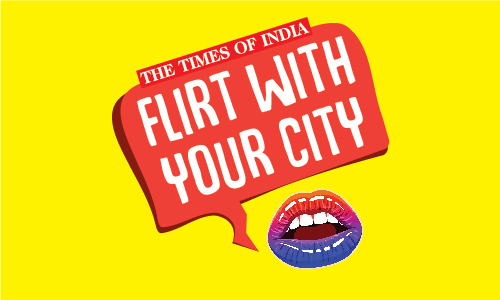