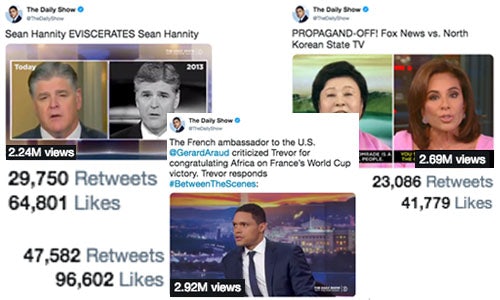 As the #1 most most socially engaged show in all of late night, @TheDailyShow is churning out content as fast as the news cycle it follows. In addition to delivering show highlights and Between the Scenes exclusives, @TheDailyShow's Twitter connects with its fans by delivering sharp, insightful commentary on breaking news in the form of rapid response jokes, original videos, memes, GIFs and more.

@TheDailyShow is staffed by producers and writers with a combination of video editing skills and ability to research and uncover archived footage that no other outlet has. Because of these resources, @TheDailyShow is able to break news by unearthing contradictions and hypocrisies, as well as highlighting aspects of a report, speech, or controversy that have gone unnoticed by other outlets.

In 2018, @TheDailyShow garnered over 131 million video views and 9 million total engagement across 1.6K total tweets, making it the most socially engaging show on Twitter in all of late night.

Video for The Daily Show 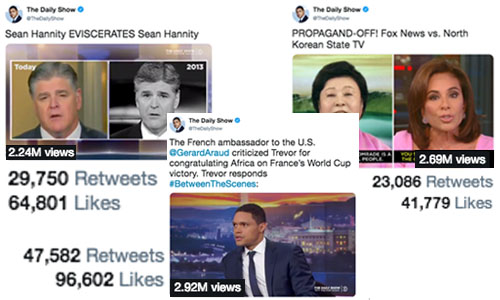