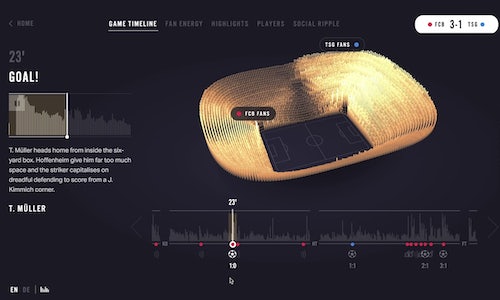 Data, analytics, IOT and smart infrastructure are set to change our world dramatically over the coming years. Siemens want to position themselves as innovators at the centre of this change and demonstrate how they are using data to transform and reimagine the world.

Siemens has partnered with German football club FC Bayern Munich since July 2017 and their digital technologies are at the forefront of the fan experience in the Allianz Arena. Siemens challenged The Economist Group to create an engaging piece of data-driven storytelling that celebrates this partnership and positions Siemens to football fans, tech communities and media as pioneers driving digitalisation.

The big data revolution is reshaping the world – and transforming football. Tracking and exploring datasets has changed how we measure player performance: every movement, pass, run is analysed to gain the slightest of advantages.

But action on the pitch is only part of the experience.

Never before has attention been turned to the fans and their performance. Passionate fan energy - the '12th man' effect - can power a team forward and change the entire course of a game.

'Reimagine the game', a totally unique and interactive platform that allows football fans to view FC Bayern games by viewing and listening to thousands of data points captured within key moments during the match.

Working with The Economist Group's data visualisation agency Signal Noise, and using incredibly precise audio detection technology, Siemens created a 3D soundscape that maps the noise of the entire Allianz Arena. We analysed the fan noise in combination with match data to identify interesting narratives and surface new perspectives on 'fan energy' and its interplay with on-pitch performance. From the fans calling out the team sheet to the game timeline, match highlights, most supported players and the social ripple of excitement, it's through the voices of 75,000 fans that we can now judge and compare the quality of each game. By responding to every change of possession, questionable decision or missed chance, the fans give us the perfect lens through which Siemens reimagine the game.

The data visualisation, analysis and commentary is hosted on a custom website on The Economist platform and promoted via The Economist Group, Siemens and FC Bayern social channels.

At the time of entry the site has received 62k unique visitors, 68k total visits and 149k page views, with one game left to be recorded. The audience are highly engaged with the data, viewing an average of 2.2 pages per visit.

To date, there has been over 288k interactions with the data visualisation tool.

The campaign has also generated 275 items of coverage. These include 570 Siemens brand mentions associated with 'innovation' and 'digitalisation' and 270 views of the brand video. This campaign now has a combined daily audience reach of over 37 million people. 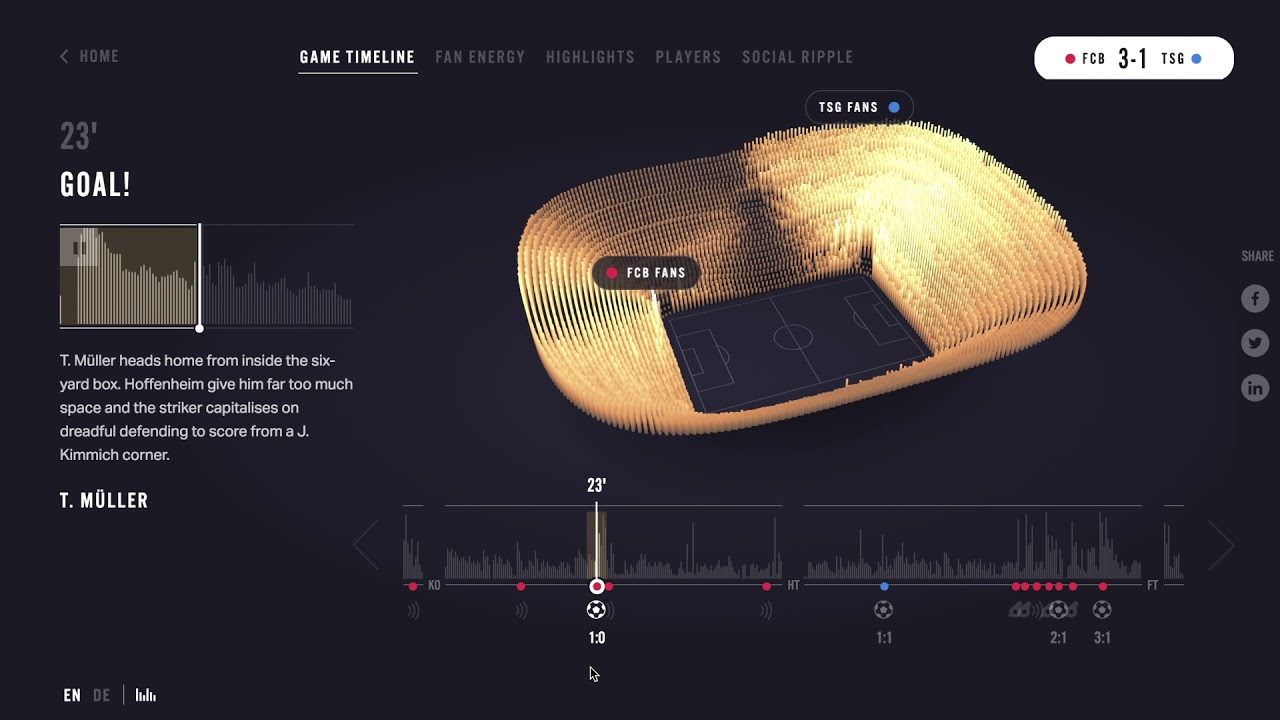