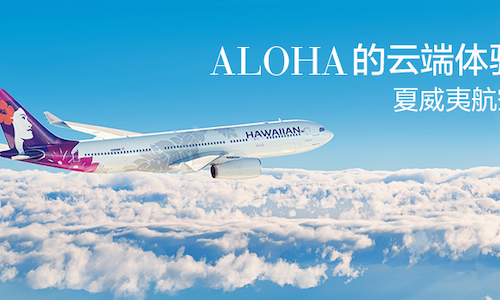 Hibiscus print, vibrant leis, and flowing linens – there is a notably distinct yet approachable element to Hawaii's quintessential island style. There's also something poignant about the notion that visitors of Hawaii, regardless of age, ethnicity, or gender, fully embrace the laid-back attire during their stay. As the Chinese agency for Hawaiian Airlines, Hylink tapped into the universal love of island wear for a summer social media campaign on Weibo, with the intent of promoting the brand among Chinese travelers while increasing engagement and user acquisition rates.

As Hawaii's official destination carrier, Hawaiian Airlines constantly strives to embody the local culture and style in all brand elements, from the flight attendants' uniforms, to the design of its aircrafts. The airline even hosts regular fashion shows to showcase their unique flight attendant styles, with the brand being known for its playful Hawaiian flair.

Hylink implemented this theme into a Weibo campaign for Hawaiian Airlines, using promoted media to encourage users to participate in a travel giveaway. By posting photos of their best representation of "Hawaiian style" on Weibo, users were placed in the running to win two round-trip tickets to Honolulu. The winner was selected by former "Miss Hawaii" Debbie Nākānelua-Richards, an honor in and of itself!

The Hylink team settled on the hashtag #MyHawaiianStyle for the campaign. For media, Weibo users were served an ad directing them to the contest on Hawaiian Airlines' account, where they had a chance to win two round-trip tickets to Hawaii. By clicking on the ad, users were inspired by content that spoke to the sentiment of Hawaiian style.

We then invited them to follow Hawaiian Airlines' account, take a photo of their own Hawaiian style and outfits, tag Hawaiian Airlines and one person they'd like to take on a trip, and use the hashtag #MyHawaiianStyle. Users were also incentivized to continue following the account so they could stay tuned for the winner announcement.

The campaign ran April 25 - May 25, and the winner was announced on June 15. And, the lucky winner aptly took her trip this February during Chinese New Year to experience the aloha spirit during the most sacred Chinese holiday of the year.

Results aside, the campaign demonstrated how eager Chinese users are to participate in Hawaiian culture by embracing the classic island style through their personal Weibo accounts. In doing so, we were able to not only engage contest participants in the Hawaiian Airlines' brand, but also incite fellow users within their networks; reaching an extremely broad Chinese audience and resulting in a successful branding campaign as well. 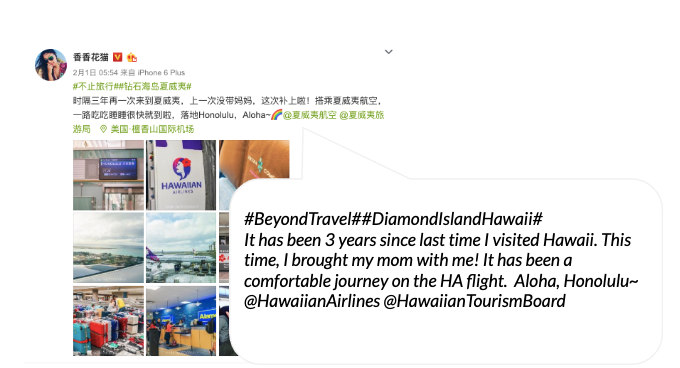