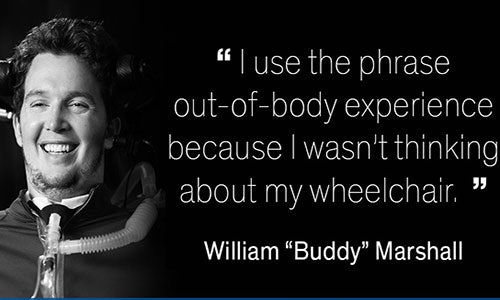 Get Behind the Wheel of the Arrow SAM Car

Imagine becoming paralyzed from the neck down – dependent on a ventilator to breathe – at only 29. Now imagine being told you can drive again. On your own.

This is the story Arrow looks to capture in this 360 video that focuses on William "Buddy" Marshall, a former Navy Lieutenant – TOPGUN trained – who was injured three years ago after a driver, high on methamphetamines and evading police, ran a stop sign and hit his car.

With the Arrow SAM Car, which made its debut in 2014, Buddy was able to sit behind the wheel of a car for the first time since his accident and drive, with full control, using only his head.

The 360 experience aims to capture not only what it's like to drive the SAM Car, but also the raw emotion Buddy felt with this new freedom.

In June 2013, engineers and medical researchers joined forces to work toward a common vision—modifying a car to be safely driven at speed by head movements for a quadriplegic race driver. This is a Semi-Autonomous Motorcar. We call it SAM.

In the project's first year, innovators integrated separate steering, acceleration and braking controls into a seamless system. They transformed what seemed like an impossible dream into reality—and they did it in less than a year. Although the car has been through a few iterations, the basic concept remains: The driver wears sunglasses fitted with eight infrared sensors. Cameras and sensors integrate into a system that motion-tracks the driver's subtle head movements in real time. The driver steers the car by looking in the direction he wants to go. For acceleration and braking, the driver sips and puffs breath into a mouthpiece equipped with a pressure sensor.

Arrow partnered with Sam Schmidt, a former IndyCar driver who was paralyzed from the neck down during a training run in 2001, to drive the SAM Car. On May 18, 2014, Sam drove for the first time since his accident in 2000, reaching 97 mph at Indianapolis Motor Speedway. Since then, Sam has driven the car up Pikes Peak, and reached a top speed of 193 MPH at Nellis Airforce Base.

In 2018, it was time to let more drivers take the wheel of the SAM Car. As part of a larger program called Courage in Sports, Arrow recruited five former service members – one from each branch of the military – to drive the SAM Car. Each participant had varying disabilities.

To compliment this program, Arrow's social team wanted to focus on a single driver to tell a more detailed story via 360 video. Buddy Marshall was a natural choice. In August 2018, Arrow worked with Koncept VR to capture Buddy's story – from his time on base in Virginia Beach, VA – to his first time in the car – to what it meant to be free from a wheelchair for the first time in three years.

The result is a dynamic and emotional story that draws the viewer in. It feels very much like sitting in the passenger seat of this innovative car.

Once the final story was complete, Arrow launched it at the same time that Courage in Sports aired on CBS on November 4th, 2018. The video was featured across Arrow social media channels, via internal email, and on Arrow.com.

But, probably more importantly than clicks and views, Arrow now has a tool to help stakeholders understand what it's like inside the SAM Car. This video is now in rotation at Arrow events where attendees and put on an oculus headset and get behind the wheel.

Video for Get Behind the Wheel of the Arrow SAM Car 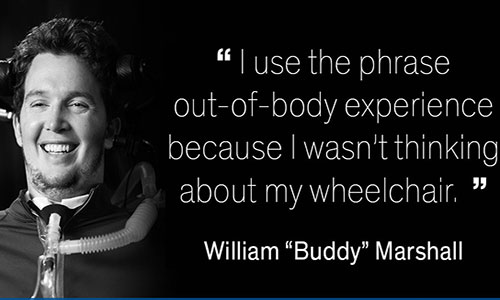