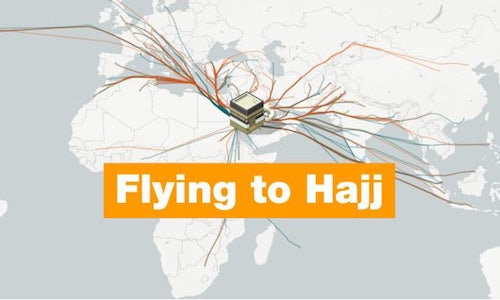 Every year, over two million Muslim pilgrims from around the world descend on Mecca to perform the Hajj.

To get an idea of how many aeroplanes are needed to transport that many people, we set about tracking all inbound flights to Jeddah and Medina.

The result is a fascinating data visualization of 16,888 flights from all around the world.

The annual hajj is one of the largest international annual pilgrimages. The 5-day event brings together Muslims from all over the world, regardless of culture, ethnicity, sect or class. It is a religious duty for all financially and physically able Muslims to perform the Hajj at least once in their lives.

Every year, the Saudi government allocates a quota of the number of citizens from each country who are permitted to perform the Hajj. This figure is largely determined by the Muslim population in each country.

We began this project by assessing the scale of data that we would need to analyse to tell this story. In order to produce an accurate data visualization of thousands of flights we set about tracking the GPS co-ordinates of all the possible flights arriving within the proximity of Mecca over the Hajj period. This meant analyzing over 10 million individual GPS co-ordinates from over 16,000 flights. To ensure that each flight did indeed accurately represent pilgrims we contacted various local Hajj providers and national carriers.

To present the data visualization we built an interactive map based on MapboxGL which aggregated the flight co-ordinates from the hundreds of destinations worldwide. In doing this we were able to not only quantify the number of planes arriving from each country but also reveal some of the geo-political aspects of this story such as Saudi Arabia's decision to suspended all flights to and from Toronto a few days before the Hajj.

This big data journalism endeavor brings together both technical and editorial innovation to tell a story which resonates with over 1.5 billion people worldwide.

When published - on 19 August 2018 - this data visualisation quickly became the most viewed story of the day on AlJazeera.com. It attracted over tens of thousands unique visitors with an average time on page of 4:17. Over the course of August and September the story received 800,000 map views with some readers spending upward of 10 minutes on the page. This level of engagement far surpassed any other data visualisation produced by the AJLabs team.

Video for Flying to Hajj 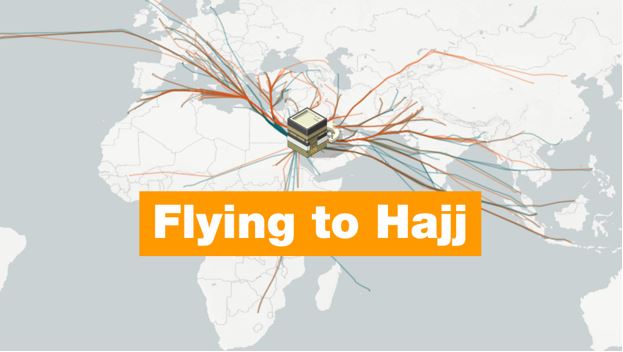