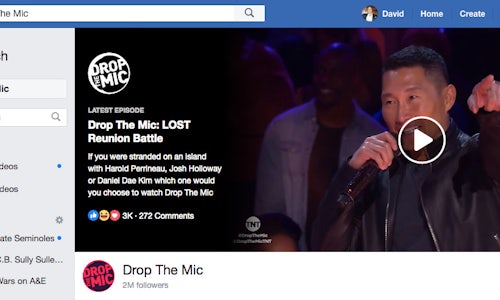 TBS's "Drop the Mic" is a comic battle rap competition series based on the popular segment from "The Late Late Show with James Corden" and hosted by Method Man and Hailey Baldwin. Each week, celebrities from the worlds of entertainment, music, sports and pop culture will face off in a rap battle royale packed with "I can't believe they just said that" moments. At the end of each head-to-head battle, Method Man picks the winner.

With the Drop the Mic Facebook page, TBS constantly engages fans with a variety of content to get them both excited for the rap battles of Drop the Mic, and to encourage them to participate in the fan community surrounding the show. The social media page is full of past battles and bite-sized memes that fans can watch on demand to get their fix of insult comedy, and share their favorites with others on social media. During episodes, Drop the Mic turns its Facebook page into a fan community center, where fans can leave comments and discuss battles as they happen, and even vote in polls on the page for who they think should be the winners of the battles they're watching.

TBS engages its early two million followers on the Drop the Mic Facebook page in a variety of ways to create not just an audience for the show, but a community. It builds off the hilarious battles and celebrity appearances that make Drop the Mic unique. The series brings fans closer to the action, and provides a place to enjoy the show with others – and to share it with the uninitiated. The reach of the page far outstrips its follower count, with viral videos spreading out into the Facebook ecosystem to garner millions of views with every new battle.