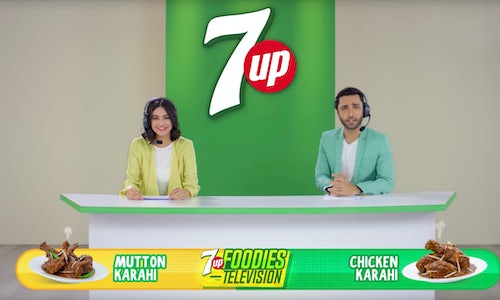 7Up is seen in Pakistan as the perfect beverage that compliments all kinds of food. While that case is rested, there is a constant debate among foodies on how certain types of food should be eaten. Biryani (a rice based delicacy) with potato or without? Chicken curry or lamb curry? Pineapple on pizza or none? Seizing this opportunity, we took this insight online by launching The Great Foodie Debate. Our digital foodies argued across all social media. However, one single platform remained unscathed by the ruthless debate, YouTube. A platform not famous for debates.

YouTube has the largest audience in Pakistan, and we wanted them to be part of this debate. The objective? Engage the viewers in the nation's greatest foodie debate on a platform that is not famous for debates at all.

Each foodie debate showcased two sides pertaining to the most popular choices among foodies. For instance, biryani, a rice based delicacy has either potatoes in it or it doesn't. The two choices for each food enabled us to project our foodie debates to skippable YouTube pre-roll ads. Since the viewer has two options while viewing the ad, to skip or not to skip, the ad format became the ideal way to provide a choice to the viewer in the foodie debate. Do you like potatoes? Keep watching the ad. You dislike potatoes? Skip the ad. Any action you may or may not perform will automatically generate a response towards the foodie debate!

We identified three most popular genres on YouTube in Pakistan and custom created the videos to target these affinities i.e. sports, food, entertainment and media. We targeted the audience with a personalised video for each category. For instance, if a viewer was watching a sports highlight, they would be caught by surprise from two sport anchors arguing about curry. If they were watching a popular soap opera, an extremely dramatic hero would step in to steal their attention away! Searching for biryani recipe video? Our debating duo will leave it in the hands of the audience to decide how a real biryani is made.

The debate would keep getting hotter with each passing second, however the matter would resolve at the end of the video with a cool chug of 7Up! Telling all foodies across YouTube that there are a billion food preferences to choose from but the one true choice for all foodies remains a chillled bottle of 7Up.

The ads broke industry standards by a mile generating over 34 million impressions with a cumulative watch time of 3.42 million minutes.

For the first time in the country, our unique way of using this ad format of inciting debate resulted in one of the highest retention rates for a preroll ad, a whopping 92%!

Our ads were also the cheapest, literally. We churned out over 6.2 million views with CPV 33.3% lower than the industry average.

Video for The Great Foodie Debate