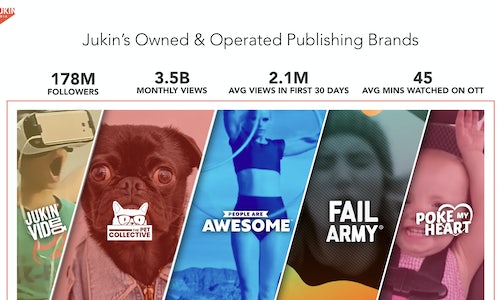 We own and operate a portfolio of social publishing brands that includes FailArmy, People Are Awesome, The Pet Collective, and JukinVideo. Our social production team is focused on super-serving the audience and growing our communities through innovative story formats that are inspired by user-generated video submissions. With all of our brands, the fans power the content. We share the stories of real people displaying raw emotions and genuine feelings, and in a world saturated with content, our thumb stopping videos capture attention and make people take notice.

For instance, People Are Awesome is dedicated to those who thrive on pushing the boundaries of human endeavor and achieving the seemingly impossible. We feature videos that celebrate human physical ability, ambition, and ingenuity, and we shine a spotlight on our fans by giving them a platform to be seen. And each of our brand's has a similarly specific mission and niche.

Constantly engaging with our fans and getting to know who they are is of paramount importance to building an intimate exchange with our audience. Our fans love our brands, and we've made it a priority to make sure they know we love them back. We've created a line of communication by joining the conversation and pulling back the curtain to provide transparency and an inside look at the people behind our brands. Simply put, the objective of each of our brands is to build and nurture global Facebook communities by consistently inspiring, entertaining, and engaging fans with fresh content that reflects the values and interests of our audience.

Sifting through thousands of submissions per month, our publishing team carefully hand-selects videos to showcase the most entertaining content from across the globe by closely monitoring social ecosystems and trends. We receive thousands of submissions on a weekly basis with once in a lifetime moments caught on camera that could never be recreated, and it's for this very reason that the content that we share with our audience strikes a chord and resonates.

Jukin's data-driven culture has lead the framework for consistently testing strategies to grow and serve our Facebook communities. This resulted in record growth and in Jukin Media becoming the #1 most viewed media company on Facebook as of March and July of 2018. Jukin's social team sets weekly goals and benchmarks based on performance by monitoring daily fluctuations, KPI reports, an end of month review, and a quarterly strategy review. Additionally, they utilize Facebook insights and several analytics tools to specifically track followers, Facebook views, total minutes watched, and engagements to ensure a steady growth rate of 5% per quarter.

Content is key. Brand producers meticulously analyze performance data on every piece of content. The content featured is sourced from thousands of weekly video submissions. Yet, every programming decision hinges on a data-driven understanding of the audiences age, education, location, occupation, hobbies, interests, etc. in order to understand the motivations and passions that drive fans to engage. Our social team is continually optimizing to make our Facebook channels a destination that inspires repeated fan engagement and encourages them to return on a daily basis.

In the face of drastic changes rolled out by Facebook that have shaken the digital media industry, Jukin Media's Facebook channels have flourished by embracing these adjustments. While some companies crumbled under the new updates, Jukin Media more than doubled their views on Facebook after the changes were announced. By March of 2018, Jukin Media became the #1 most viewed media company on Facebook (according to Tubular Labs) despite not having been in the top 25 digital publishers the previous month, and being just a fraction of the size of the media conglomerates that dot the top 10 list.

Jukin's social team partially attributes our steady growth to the development of original series designed for the Facebook Watch ecosystem, launching a total of nine new franchises in 2018. These owned and operated pages have a collective 175 million fans and represent the #1 and #2 most viewed Facebook Watch series, according to Tubular.

Thousands of fans and individual video creators submit to Jukin Media in hopes of being featured
on one of the brand pages. Jukin's belief that the future of storytelling is user-generated motivates the social team to look more deeply at the stories submitted by fans. Inspired by authentic, real-life video creator stories, Jukin's team produced three original series focused on highlighting the most talented athletes from around the world. The E/O, People Are Awesome Presents, and 'Fly Guys' all feature People Are Awesome creators who originally submitted content through the website, sparking new storytelling formats that reach millions.

The blueprint for our growth and strategy all stems from our fans willingness to share their content on a daily basis, and by promoting our data-driven culture by measuring our social activities in order to learn what's successful, what isn't, and how we can improve.

Jukin's growth is the shared accomplishment of several specialized teams. Our content discovery team scours the web to acquire the most engaging content from around the world, in collaboration with brand and community managers who are always in tune with how each unique brand audience's interests shift with changing social trends. We have also invested in building an exceptional publishing and content operations team. These teams are tasked with continually testing and leveraging data to identify what is working, and are heavily involved in making prompt changes to creatively iterate, optimize, and address platform changes as they arise.

Despite Facebook's algorithm changes that shook the industry, Jukin Media's owned and operated Facebook presence grew massively in 2018. Our combined following across our publishing brands grew from 58 Million followers to a staggering 141 Million followers, representing a 140.5% growth increase, and earned more than 33 billion annual views. Additionally, minutes watched across our Facebook videos grew from 1 Billion monthly minutes watched to 30 Billion monthly minutes watched over the course of a single year.

According to Tubular Labs, Jukin Media was the #1 Most Watched Company on Facebook in March and July of 2018, rising above companies like Buzzfeed, Comcast, and Disney. In March 2018, Jukin's show pages held the #1 and #2 spots for most watched channels on Facebook Watch, and continued that velocity to grow exponentially throughout the year. In fact, implementing a robust strategy designed for the Facebook Watch ecosystem resulted in more 73 million new fans and followers in 2018. 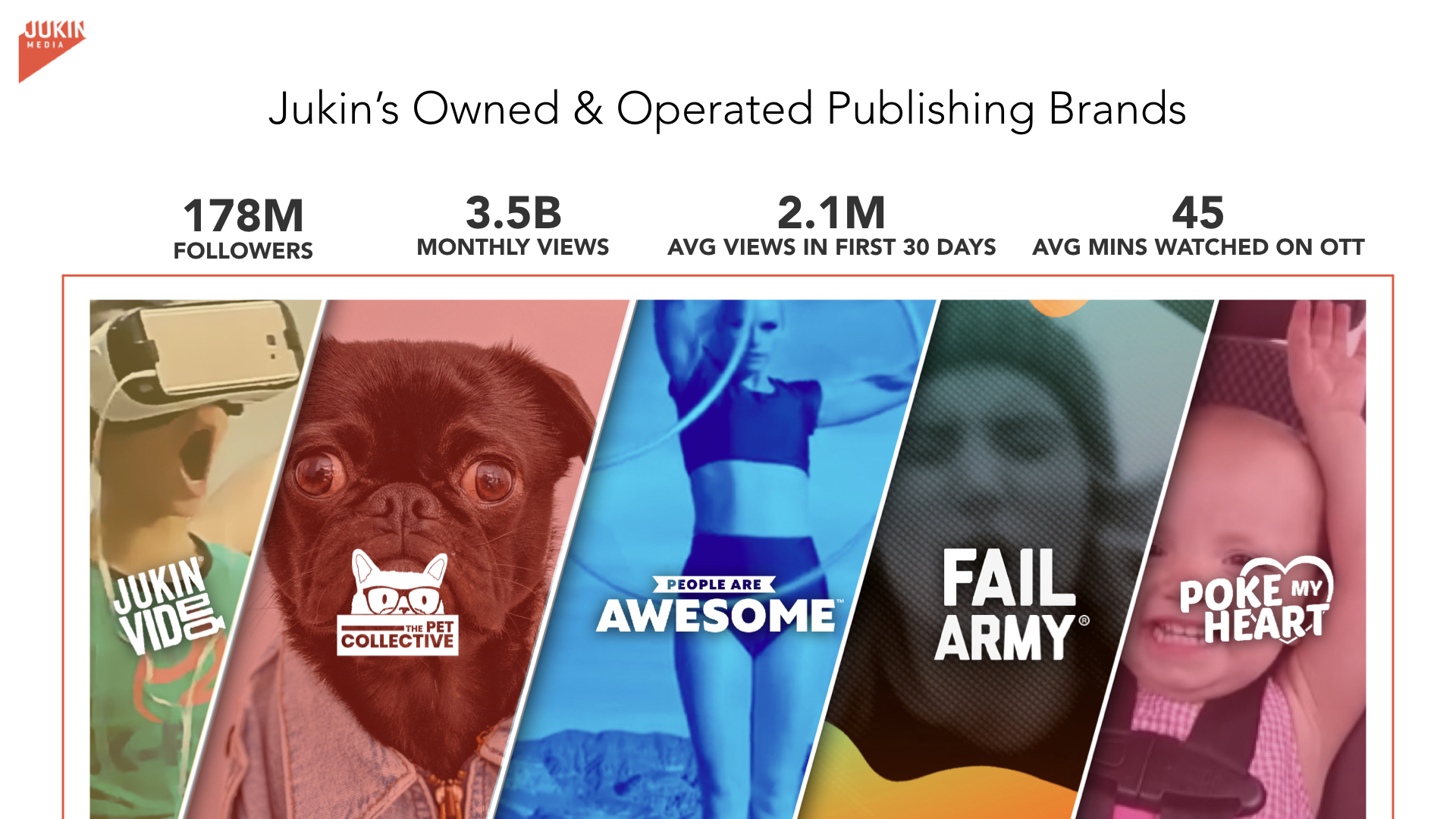