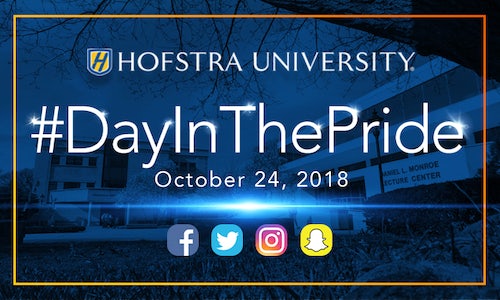 A Day in the Pride

A Day in the Pride showcases the everyday and extraordinary things that happen during a single, 24-hour period among the greater Hofstra Pride community – on and off-campus. The aim is to remind people that no matter where they are or what they are doing, they are a member of a community that transcends geography and generational boundaries. A Day in the Pride celebrates the diversity of individuals and achievements in the Hofstra community, while reminding them that they share a common bond.

A Day in the Pride is held once/year since 2014 (with the exception of 2016 when Hofstra hosted the first presidential debate in the 2016 election cycle). The goal every year is to generate a wide variety of content across all social media platforms. We solicit text, photos, videos and boomerangs from people near and far – students, faculty/staff, alumni, families, and more. Although the number of posts is an important metric, the range of content also helps determine the success of the campaign. We aim to get people to document their classes and time spent in labs; days hard at work; spending time with friends and family; study abroad trips; and anything and everything in between.

So while our goals in 2018 remained consistent with those of previous years, we aimed to generate more user-generated content than ever before and to see a greater range of content.

The social media landscape continues to change, as do the behaviors of our various audiences. Understanding this was the first step in making sure A Day in the Pride 2018 was our best yet. The following are some of the promotional efforts we used to generate enthusiasm and awareness ahead of this year's campaign:

Perhaps the biggest difference in our promotional efforts from previous years was our emphasis on face-to-face interactions. At the end of the day, there are real people behind every social media account. We wanted to elicit an emotional response. We wanted them to feel more connected than ever to the Hofstra community – their community. So those physical promotions were essential, as were our increased efforts to repost content. We made it about them – not us. People love to see themselves and their friends featured on social media. So we gave that to them. We gave them a platform and boosted the reach of their content, further emphasizing not only the value of their participation, but of their overall value as members of the Hofstra community.

We experienced great success in the use of #DayInThePride across all social media platforms, making this our best year yet. Total number of Instagram posts increased by 63 percent from 2014 - Day in the Pride's inaugural year. And Facebook posts rose by 265 percent. In addition to our 2018 numbers, you can see from looking at the wide variety of user-generated content that people shared their "Day in the Pride" in creative and meaningful ways, further strengthening the bond members of the Hofstra community share. We even trended on Twitter for the second year in a row. People across a number of time zones participated this year, documenting what they do at work, providing a sneak peek into their internships and classes, showcasing their study abroad trips, and much more. Additional metrics below:

-170+ Instagram stories included the hashtag on October 24, as well.

In addition to increased engagement since the campaign's first year, we saw great success compared to 2017, as well. For example, Facebook posts using the hashtag increased by 95 percent, and Instagram posts rose by 10 percent. Additionally, Twitter impressions were up by 25 percent.

Video for A Day in the Pride 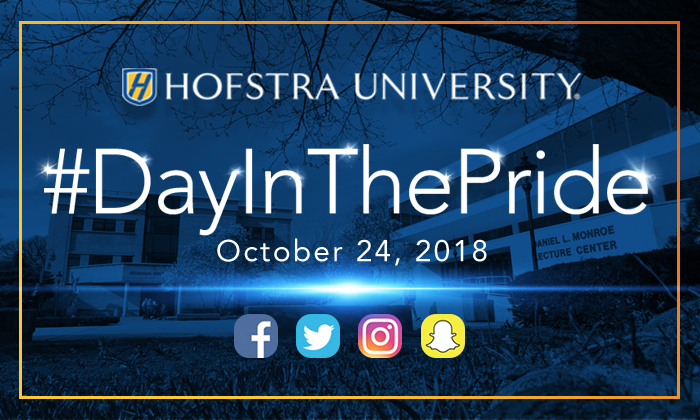