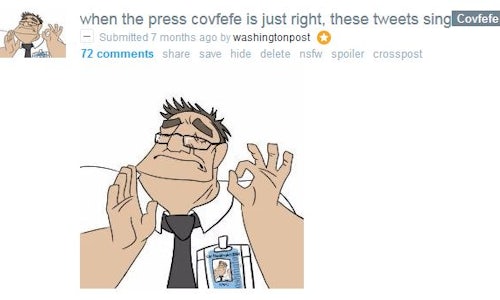 The Washington Post joined Reddit to engage with users on the fifth most-visited site in the U.S. For years Reddit has been a treasure trove of story ideas for journalists, but its users have also been a notoriously weary of brands and journalists. The Post took on the challenge to dive into Reddit to have meaningful, fun conversations with readers, explain our journalism in a way that promotes media literacy and trust, seed story ideas directly from users in a way that makes them feel part of the process, and promote The Post as a digital-first organization that is willing to listen and engage with its audience.

The Washington Post Reddit presence is based on the premise: What if a news organization operated online like a creator? With this in mind, The Post's Reddit profile launched with a series of Ask Me Anything sessions highlighting prolific Reddit users in the newsroom, as well as Pulitzer Prize-winning journalists like David Fahrenthold, to discuss their work. The Post also used humor and homebrewed memes to announce itself on Reddit, as well as to insert itself into conversations already happening about its work. When the president tweeted "covfefe" during the midnight hour, The Post was immediately ready with jokes and a meme.

The Post believes that Reddit users are a highly engaged audience that cares about longform, deep journalism, as indicated by successful AMA sessions with our national security team, our foreign correspondents who have spent time in North Korea and Russia and the investigative team responsible for covering Roy Moore's campaign. And in recognizing that discussions about Post journalism already happen without us on Reddit, we provide new context to our work on Reddit that provides the reader a better understanding of our work, and more value beyond what they read in our pages. The Post also regularly responds to criticism directly, even from users who call us "fake news."

The Post has used its Reddit presence to elevate community interests. When a controversy over video game "Star Wars: Battlefront 2" exploded on Reddit which resulted in the most downvoted post in site history, The Post responded by reporting the story while breaking news, and immediately engaged with the community embroiled in the controversy. And when an Alabama weatherman went viral three times in one day during Hurricane Irma, The Post reached out to the TV station and helped them arranged an AMA, which subsequently became the 7th most popular AMA in site history. The Post reaped no tangible benefit from it besides a simple shout out from the meteorologist.

Since debuting on Reddit, The Post has become one of the most-shared news organizations on the site, and has built up a reputation that's so responsive to its readers, random users constantly tag us in news tips or interesting stories they find. Karma is the only currency that matters on Reddit, and The Post has racked up hundreds and thousands of karma less than a year on the site. Reddit users have given us enough "gold" for comments (paid as donations to support Reddit) to last us until 2023, and it has twice won "Best Comment of the Day" on Reddit. Our Reddit presence was a finalist in the WAN-IFRA Digital Media Awards for "Best in Social Media."

The result of our presence is best encapsulated by this exchange between two Reddit users. One said, "Today I learned Washington Post has a Reddit account?" Another user responded, "Be careful. They know how to use it."