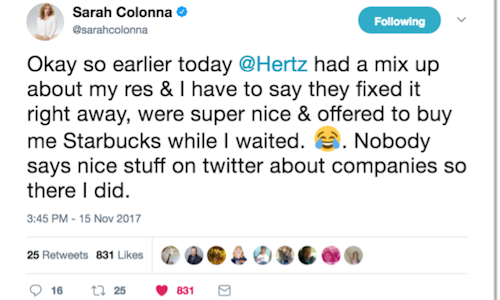 The Hertz Corporation operates the Hertz, Dollar and Thrifty car rental brands in approximately 9,700 corporate and franchisee locations throughout North America, Europe, The Caribbean, Latin America, Africa, the Middle East, Asia, Australia and New Zealand. The Hertz Corporation is one of the largest worldwide airport general use vehicle rental companies, and the Hertz brand is one of the most recognized in the world.

With thousands of locations and multi millions of customers worldwide, the brand aimed to provide best in class customer service to address consumer questions, complaints and concerns in real time. Hertz needed a way to combat customer issues on social media that drive overall low net positive sentiment. They recognized that slow and inadequate responses on public facing channels were a gauge of brand health and influenced purchase consideration.

Hertz and its social media agency Brickfish evaluated the data and saw that over 67% of all customer issues were not being responded to. The average response time was 5 hours and 26 minutes, while the majority of customers expect a response in less than 30 minutes. In October of 2016, The Hertz Corporation integrated with Brickfish's social customer care team. The goal was to respond to more customer issues being voiced on social media and do so in the timely manner customers expect on social platforms.

In order to become #1 in social customer care Hertz needed to surpass industry benchmarks for the fastest response time with the most issues resolved in the shortest period of time. Brickfish and the Hertz Customer Care team partnered to develop a strategy that would incorporate social monitoring and real-time engagement. Prior to the partnership, Hertz focused on two channels for customer care, Facebook and Twitter, leaving many customer issues unresolved. Hertz and Brickfish developed a new communication flow to optimize strengths of both teams and cover all social media channels and several review sites.

The renewed customer care strategy and action plan allows the brand to provide unparalleled customer service to current and potential customers 24/7. Social customer care guidelines were developed to identify common issues, situations and appropriate responses in order to quickly and effectively find and provide resolution. The goal FRT (first response time) was set to under 30 minutes and the brand voice was established for each social channel. The strategy and process in place has created synergy between operations and marketing, as the Social Customer Care Team promptly addresses operational issues online (such as issues with fleet, staff and delays at counter) and brings the issues to local management for improvements at the individual locations. Additionally, we've created a crisis communication plan to escalate major issues and engagements with public figures, influencers, etc. to the appropriate stakeholders. During a time of crisis, social media has become an effective tool to share and exchange information.

During Hurricane Harvey in Houston, Twitter proved as the best means of communication for disaster relief allowing The Hertz Corporation to assist customers effectively and bring in fleet. Hertz also used the platform to connect with Influencers who were traveling to Houston for relief efforts. Influencer Stef Michaels, known to her millions of social followers as @adventuregirl, noticed that Hertz was actively using Twitter to engage with citizens. Stef was heading to Houston with over 1,000 dog food bags for displaced animals. She tweeted @hertz to partner on this important journey. Hertz provided Stef with a SUV to transport the food to shelters leading to increased engagement, reach and positive sentiment. Another example, Heath Hussar, an influencer with nearly 600,000 followers on Twitter, tweeted that his pickup truck was stolen. The Hertz customer care team intercepted his tweet and hooked Heath up with a pickup truck rental (see image attached). His followers jumped in on the conversation and created the hashtag #HertzToTheRescue, which tremendously increased Hertz's reach and positive sentiment.

Another recent example includes comedian Sarah Colonna's negative experience at the Hertz counter. Sarah tweeted about how there were no available rentals when she arrived to pick up her car in Atlanta. Our real-time engagement team was able to reverse a negative into a positive and ultimately turn Sarah into a brand ambassador (see images of the conversation attached). Stories like these and the truth in the data makes our work worth every tweet!

In 2017, the average first response time (FRT) was reduced to less than 12 minutes while message volume during this time increased to handling over 373,000 customer issues (more than 31,000 issues per month on social).

Hertz, Dollar and Thrifty are the three fastest car rental companies in the industry on Twitter and Hertz was ranked as the #1 customer service brand for RAC on Twitter since March 2017. For Facebook, the brand went from the worst in the competitive set to the industry leader amongst car rental companies. Additionally, the social care team proves to solve real-world problems and turn negative issues into positive resolutions. There has been a significant improvement in brand sentiment with negative sentiment reduced to 35% (2017) from 54% (2016). The greatest success of all is when we can save a customer's day and make a negative experience positive. 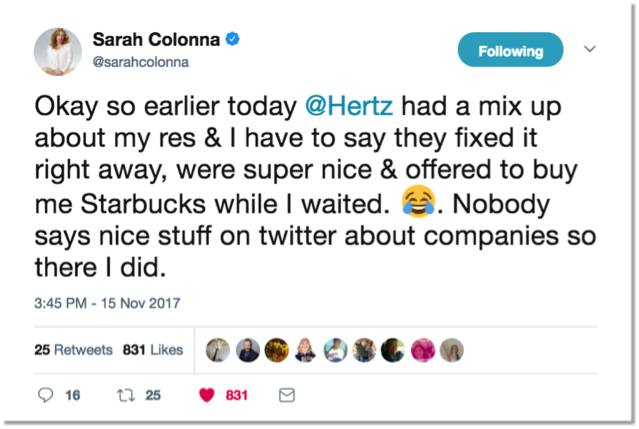 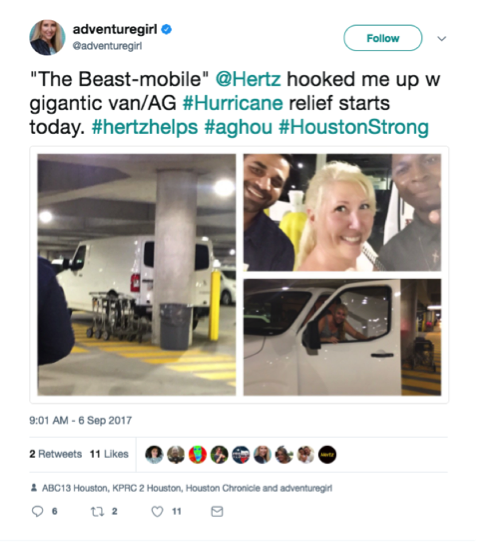 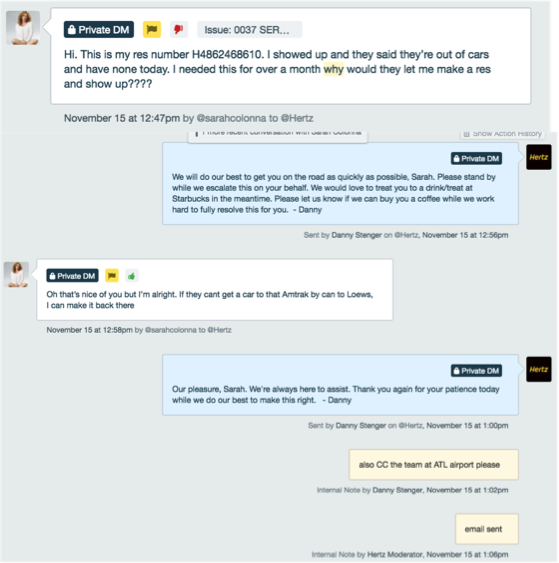 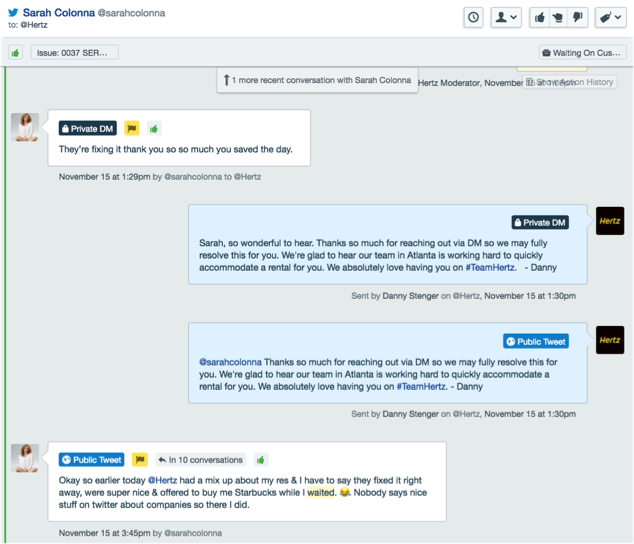