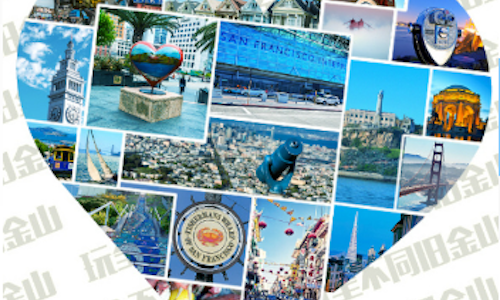 There's something about the palpable energy of San Francisco; it's vibrance, diversity, and spirit of innovation are some of the many reasons it has become such a coveted city, and the number one overseas destination for Chinese travelers. As the city's destination marketing organization, San Francisco Travel Association (SFTA) felt it was only fitting for their official tagline to be, "Never the same, always San Francisco," encapsulating the notion that the city is constantly evolving, yet at its heart, maintains the same spirit and integrity as ever.

SFTA is focused on imparting this feeling on prospective Chinese travelers, and engaged our Hylink team to leverage our innate knowledge of the Chinese digital space to execute a campaign to drive SFTA's Weibo followers to the organization's newly-verified WeChat account. With 2017 serving as the 50th Anniversary of "Summer of Love," the Hylink team viewed the occasion as an opportunity to further communicate a key message – #MyLoveMySF – in May a campaign that conveyed a shared love of the city's harmony, variety, progress, multiculturalism, and the environment.

With nearly 400 million users on Weibo's platform, Hylink sought to leverage this engaged user base and direct the audience toward SFTA's WeChat account, in an effort to generate impressions and acquire new followers through feed ads and KOLs (Key Opinion Leaders, i.e. Influencers). Throughout the campaign planning and implementation processes, the Hylink team maintained the theme of love throughout the creative, digital, and content aspects of the campaign.

To create instant buzz and engagement, we invited SFTA's Weibo users to share their love stories through text, photos, and videos within the campaign page, and by following SFTA's new WeChat account. In doing so, participants had the opportunity to win a free trip to San Francisco. Our team had to be extremely strategic, as travel and booking season kicks into high-gear in May, presenting a crowded market of competing destinations attempting to attract the same Chinese FIT (free independent travelers) audience between the ages of 20-45.

We promoted our designated hashtag, #MyLoveMySF, to collect quotes and photos from Weibo users who were then able to share their unique love story in written, visual, and video formats. Users could to create multiple 60 - 120 second videos of the different "loves" found around San Francisco, which were featured on the campaign page.

In our execution, we utilized banner feed ads and promoted posts on SFTA's Weibo homepage. The user clicked on the banner or post link, which re-directed to the campaign page featuring pertinent contest participation details and a QR code for SFTA's WeChat account. The user had to follow SFTA's official account to be eligible for the trip, which helped propel follower acquisition. From there, the user was able to actively participate in the campaign by posting content and hashtagging #MyLoveMySF.

To instill a sense of community and collaboration, we ensured that by using the hashtag, the user would be able to view all contest posts and engagement, which further inspired them to participate after viewing all the excitement around the campaign. The lucky winner was announced on Weibo and WeChat in June, and received round-trip tickets to San Francisco and a free hotel stay at the iconic Hilton Union Square.

Key performance metrics (KPIs) were measured through impressions, video views, engagement rates, and new followers gained. The campaign results surpassed nearly all benchmarks, and are highlighted in the below.

With KOLs, we outperformed expectations by 6.8%, earning a total of 5,110,673 impressions and 104,233 engagements. With Weibo ads, we found that the high-quality, informative videos were particularly well-received within our target audience, and the ability to share personal stories with the prospect of winning a free trip to the city was highly incentivizing. In launching the Love Campaign on Weibo, we were also able to acquire 7x more followers compared to our standing monthly goal, which increased 273% during the month of the campaign. On WeChat, we observed a 43x increase following the initial launch of our account.

The campaign results are demonstrative of the standing notion that love is a topic that we can all relate to – be it a romantic love, a cultural love, or a familial love. Further, by utilizing engaging video campaigns, users are able to participate in a very genuine and raw manner, ultimately garnering 2.5 million views during the campaign's lifecycle.

We are particularly pleased with this campaign, from the standpoint that it proves that appealing to an individual's heart is something that will always prove effective. Love is universal, and a theme that we will never get tired of weaving into our work. 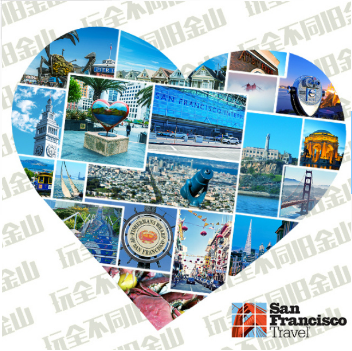 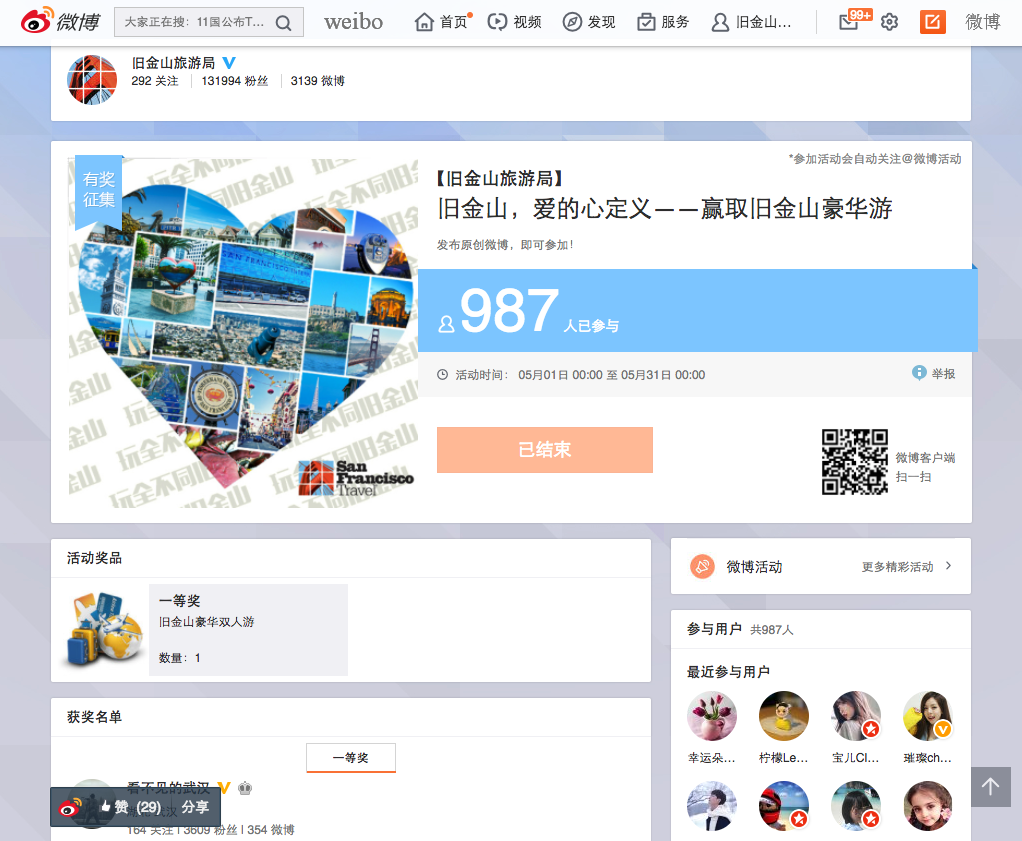 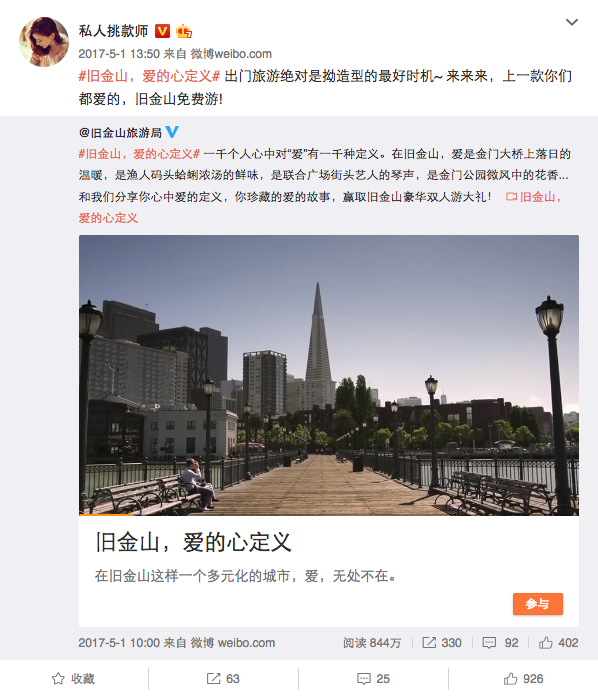 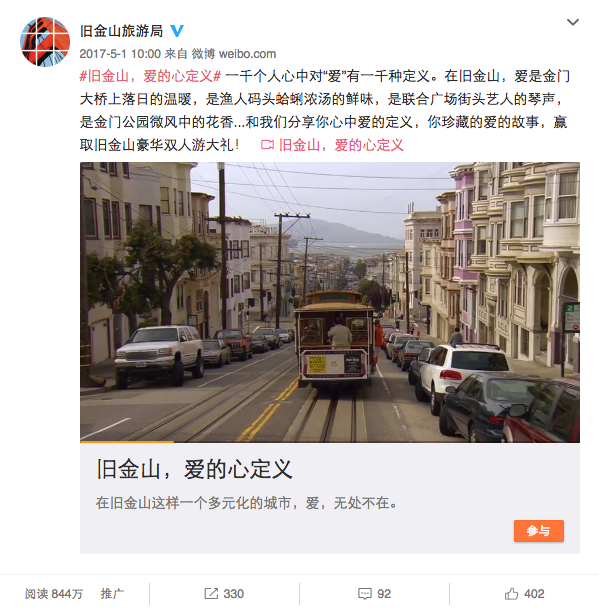