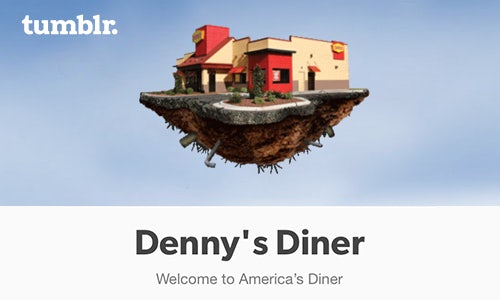 When it comes to Tumblr, the goal for Denny's is simple: Don't be a typical branded Tumblr account.

As "America's Diner", Denny's is a brand that has worked hard to reflect the growing diversity of its customers and is constantly adapting the way in which the brand connects with them. To be successful, Denny's understands that it has to engage with customers on their terms and in their terms. This means utilizing the uniqueness of a platform like Tumblr to connect with fans in a way that is authentic, and relevant to the Tumblr community.

So rather than push products or messaging on Tumblr--a platform whose community very often rejects overt attempts at advertising--the objective for the Denny's Tumblr is to make the brand be a part of the community, not an intrusion; to connect with fans in an organic way. Or simply put, just have fun. Tumblr needed to be a place where Denny's can extend those late-night, slightly off-centered conversations between friends that occur in the Denny's booth and embrace that "come as you are" philosophy that America loves about Denny's.

For Denny's to be successful on Tumblr, the diner knew it couldn't just talk to a Tumblr community that generally rejects any form of marketing; it had to be a part of the community. Denny's Tumblr would speak to them like we would speak to anyone we are friends with, talking about news, current events, pop culture, popular memes – all over a big stack of fluffy pancakes.

Knowing that it would have to have fun, relate to the fans and platform, Denny's strategy for Tumblr became one centered around brand affinity. Denny's fans on Tumblr don't necessarily need to know when menu items go on discount or which locations participate in which regional deals, because frankly that's not why they're on Tumblr. They're there for irreverent and goofy GIFs, eye-rolling, stomach-aching puns and clever wordplay, basically just all around nutso playfulness. So Denny's did just that on Tumblr, putting its own slightly-off-centered Denny's spin on it.

As a way to connect and converse directly with the tumblr community, Denny's also regularly utilizes the Tumblr "Ask Box". A unique feature of Tumblr where our fans can ask absolutely anything and where Denny's can dish out advice or professes undying love for their followers.

Through Tumblr, Denny's lends its imagination to its menu and captures the true essence of a diner – a place where anything can happen at any time.

Denny's Tumblr is wild, wacky, and weird. And the Tumblr community loves it, eating up Denny's content like a hot stack of fluffy pancakes. In 2017, Denny's acquired nearly 111,000 new followers on Tumblr, and generated over 2.8 million engagements and 72 million organic impressions.

Denny's unique approach to Tumblr has even gained national attention outside of the platform. Generating nearly 6.8 earned media impressions with coverage in outlets like Buzzfeed, CollegeHumor, Ad Age, Adweek and more, Denny's Tumblr strategy has earned headlines like "20 Times Denny's Tumblr Was the Funniest Thing on the Internet", "Whoever is Running the Denny's Tumblr Account Knows Exactly What Going There at 3am Feels Like", "15 Posts That Prove Denny's Tumblr Page is the Weirdest Place on the Internet", and "11 Hilarious Fan Interactions from Denny's Diner on Tumblr". 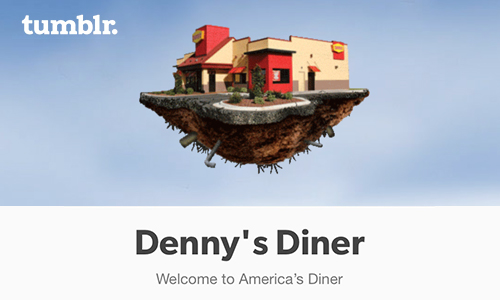