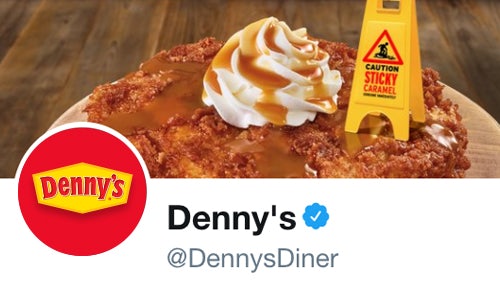 Denny's is "America's Diner" and the brand is one that reflects the growing diversity of today's America, a place where people from all walks of life come together with family, friends and complete strangers. To be successful in connection with this diverse customer base, Denny's knows it has to communicate with customers on their terms, and in a way that is relevant to each platform. More importantly, Denny's knows that to have any success connecting with customers on Twitter, they have to provide content appropriate for the platform and embrace the community in order to build emotional relevance and celebrate creative self expression.

So the goal for Denny's on Twitter has been simple: Don't be a brand Twitter account. Instead, find a way to separate Denny's from the noise of corporate social media flooding the streams of our fans and allow Denny's to be a part of the community, not a intrusion.

The strategy for Denny's Twitter is to serve as the online extension of all of those late-night, slightly off-centered conversations that are happening with friends and families in Denny's booths across the country. Denny's Twitter is like one of your best friends--a friend who also happens to love stacks of fluffy pancakes.

Denny's strategy has focused on using Twitter just like regular users do. Rather than pushing products, promotions and other marketing messaging, Denny's Twitter capitalizes on breaking news, pop culture, trending memes and more to celebrate the things that have America talking--whether that be America's dreadful start to 2017 (ugh, amirite?), that real show about a fake Diplo, the solar eclipse, or how much we all love pancakes.

Denny's stays relevant by taking that 24/7 "always open" philosophy made famous by its restaurants and applying it to Twitter, never missing the perfect opportunity to join in the conversation happening in real-time and offering up a fun, sometimes-weird, Denny's take on it.

Denny's Tweets have been eaten up like a stack of fluffy pancakes. In 2017, Denny's Twitter content earned over 227 million impression, proving that the brand understands how to connect with fans through an authentic appreciation of pop culture, memes and more. Denny's had several tweets that drew an impressive amount of notoriety over the past year, including Denny's "Zoom Tweet', which gave fans temporary solace from the "existential dread" of 2017 through a diner-inspired interpretation of a popular meme. That tweet alone generated over 122,000 retweets, 172,000 likes and over 30 million impressions--and within 24 hours it had become one of the most successful brand tweets. OF. ALL. TIME.

With a truly unique approach to the platform, Denny's Twitter account also captured the attention of the media, generating nearly 52 million earned media impressions and nearly 300 media placements for the diner's Twitter strategy and content. Throughout the year, the Denny's Twitter account was featured in high profile outlets like The New York Times, People, Mashable, USA Today, Forbes, Ad Age, CNET, Teen Vogue and much, much more. 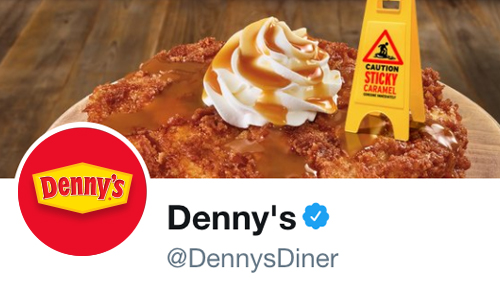