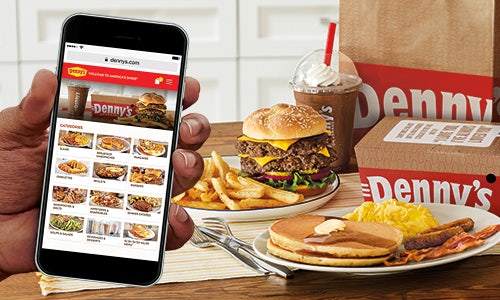 Denny’s on Demand: Whatever, Whenever, and now Wherever

Traditional takeout wasn't keeping up with America's modern demands for convenience so Denny's had to be more available beyond the diner; it had to take that 'always open' brand philosophy and integrate it with easy-to-use technology to bring access to its craveable diner fare straight to the fingertips of its guests.

Looking at online conversations, Denny's noticed that the the majority of "I wish" conversations had shifted from wishing there was a Denny's restaurant closer to where they were, to wishing Denny's delivered – or often more specifically – that they could have pancakes in bed.

Combined with recent innovations to their takeout packaging, the time to expand the diner's reach to nearly every home in America had arrived.

And thus, Denny's on Demand was born.

With an extensive breakfast, lunch, dinner and late-night menu available 24/7, Denny's has always been the place where America goes to get whatever they want, whenever they want. With Denny's on Demand, they could now enjoy their favorite Denny's dish wherever they are. The world had become their diner.

With Denny's on Demand, Denny's carefully considered and improved upon all aspects of the online ordering experience. Instead of simply relying on a generic online ordering solution, Denny's worked closely with EP+Co and leading digital ordering provider, Olo, to develop a truly customized user experience--one that could handle the unique needs and demands of Denny's guests. The platform, which was a first of its kind in the family dining space, included a complete revamp of the brand's mobile app, making it quick and easy for users to find their local Denny's restaurant, completely customize and place an order from Denny's extensive menu, and pay for takeout--all from the convenience of a smartphone or tablet.

The Denny's on Demand platform also made it easy for fans of the diner to order via social media. Denny's was one of the first brands to utilize a new online ordering functionality through Twitter, providing guests with an interactive way to select and order their favorite dish within a Direct Message. Fans of Denny's were also able to engage and place an order with the diner directly, any time of day or night, via a branded Chatbot and other on-page options.

To generate excitement and buzz for the launched a national TV campaign which placed the iconic Denny's booth in unexpected places (e.g. being dropped out of a C-130 via parachute, driving down the highway on a motorcycle, in a couple's house, and in the backyard next to a pool).

Denny's supported our TV campaign with a strong social media push through Denny's Twitter, Instagram and Snapchat channels, bringing the convenience and fun to all of America's feeds.

Additionally, Denny's leveraged media integrations with both Hulu and Jimmy Kimmel Live, two programs that indexed with Denny's target audiences. For the Hulu integration, customers were offered a free 60 day Hulu trial after placing their first order with Denny's on Demand.

The platform helped lead Denny's achieve a positive growth in same-store sales for 2017, making the brand stand out as one of the few success stories in an industry that saw an overall decline of -1.1* percent in sales.

A testament to the platform's ability to fully customize orders and America's desire to be able to enjoy breakfast anywhere, Denny's Build Your Own Grand Slam is the most popular dish ordered through Denny's on Demand.

The national media has also recognized Denny's innovation. Throughout the year, Denny's on Demand generated over 13.8 million earned media impressions and was featured over 400 different times in a range of broadcast, print and digital outlets including CNBC, Inc., Engadget, Fortune, Ad Age, UPROXX, among others. Reporters touted Denny's transformative approach to online ordering, or as an editor at Delish proclaimed, how Denny's is "Doing the Lord's work."

Video for Denny’s on Demand: Whatever, Whenever, and now Wherever 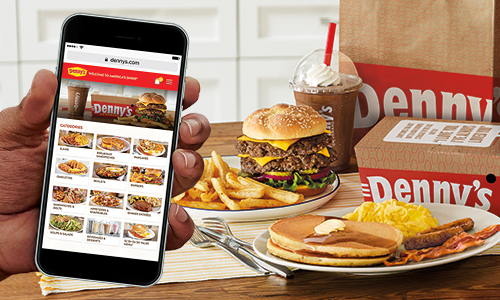