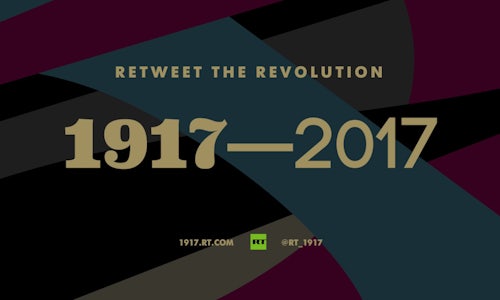 What if Twitter existed 100 years ago? Just imagine, Russia's Tsar Nicholas II, after signing a forced abdication in March 1917, he reaches—not for his usual cigarette—but instead…his iPhone. Presenting arguably the most ambitious, large-scale LIVE history re-enactment to ever be attempted on Twitter, #1917LIVE is a project that aims to tell the story of the Russian Revolution through real-time tweeting from a network of linked accounts. Its key objective is to educate and inspire the audience to learn, while taking the standards for Twitter projects to a whole new level.

Our task is not only to recount historic events in Twitter's dynamic and intense style, but to spark global interest in one of the biggest geo-political events of the 20th century, which may not be widely understood in the West. In other words, we attempted to create the first-ever, monumental social media drama involving dozens of online characters: their lines are short 140-digit messages and the stage is Twitter. But unlike in traditional plays, the audience is not a passive spectator but an active member.

Developing in real time, #1917LIVE creates a highly engaging experience that gives our audience a unique chance to follow and interact with historic figures themselves—almost like a digital time machine—through retweets, polls, Q&As and much more.

#1917LIVE runs dozens of Twitter accounts under the name of key historical characters of the period like Lenin, Stalin, Kerensky, Tsar Nicholas and his family. Everyone from imperial generals, military police, transitional government officials, MPs, foreign embassies and of course ordinary people, who went through the turbulent events of 1917, all contribute to the conversation through their individual feeds. Characters' accounts are united under the flagship feed - the Russian Telegraph (RT), a fictional media outlet that – as the revolution develops – is rebranding itself into the Revolutionary Times.

Work on the project started in the summer of 2016 and is still ongoing. Every tweet, every personality, is based on real events and historic memoirs. The project will include hundreds of archive images and photos, as well as specially produced video materials. Launched at the end of 2016, #1917LIVE will fully emerge in February and run throughout 2017. As the #1917LIVE project nears its end in November, there will be over 5000 tweets made from more than 50 different Twitter accounts.