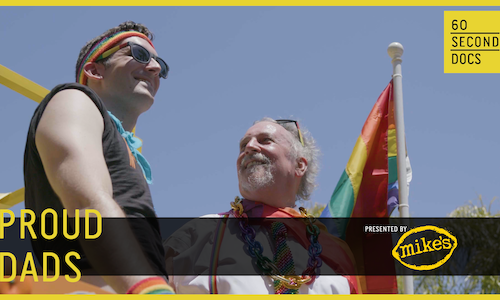 60 Second Docs partnered with Mike's Hard Lemonade to celebrate positive and accepting father-son relationships -- aka "Proud Dads" -- in an innovative program incorporating a real-life branded activation and event experience into the narrative of documentary storytelling.

Mike's tapped 60 Second Docs to explore the deeper emotional connection that comes from shared happiness at one of summer's biggest cultural events. We facilitated and documented a father and son's experience of attending LA Pride together -- atop a Mike’s “Proud Dads” float.

Through the event and episode, we sought to drive an increase in brand favorability among consumers as well as to integrate Mike’s into one of summer’s biggest cultural events. We also worked to surpass viewership performance from our previous campaign with Mike’s, and to earn a significant number of media impressions through an influential and culturally relevant campaign.

Our campaign consisted of a real-life activation with a deep emotional connection for both subjects and viewers. We began by exploring and telling the story of a father-son’s experience attending LA Pride together for the first time.

Incorporating an IRL branded event activation into the 60 Second Docs storytelling format, we explored the emotional connection that comes from shared happiness at one of the year’s biggest cultural events.

Once released, we used paid media to amplify the episode, identify and reach additional audience with adjacent interests like Pride and other LGBTQ initiatives.

We also planned a Mike’s giveaway sweeps to take place during SF and NY Pride weekends, during which we reshared the documentary to reach viewers in additional cities and encouraged viewers to partake by sharing their own Pride stories with us.

The documentary received additional support from LGTBQ influencers like George Takei, Brad Takei and TS Madison, and was also shared by major Facebook influencers like Jay Shetty and Love What Matters.

Major press coverage drove even more earned media, including live ABC7 coverage that focused on the 60 Second Docs Mike’s Hard Lemonade parade float for more than a minute and a half. The Advocate (the major source for leading LGBTQ news) also featured the proud father/son duo in an article and across social platforms.

60 Second Docs further extended the campaign with a Mike’s giveaway sweeps during SF and NY Pride weekends, while reposting the documentary via Tweets and Instagram and Facebook Stories to capture relevant and timely audience attention.

Audiences responded with massive support and emotion for the father/son duo, with direct mentions of how happy they were for Mike’s Hard Lemonade in supporting the LGBTQ community. 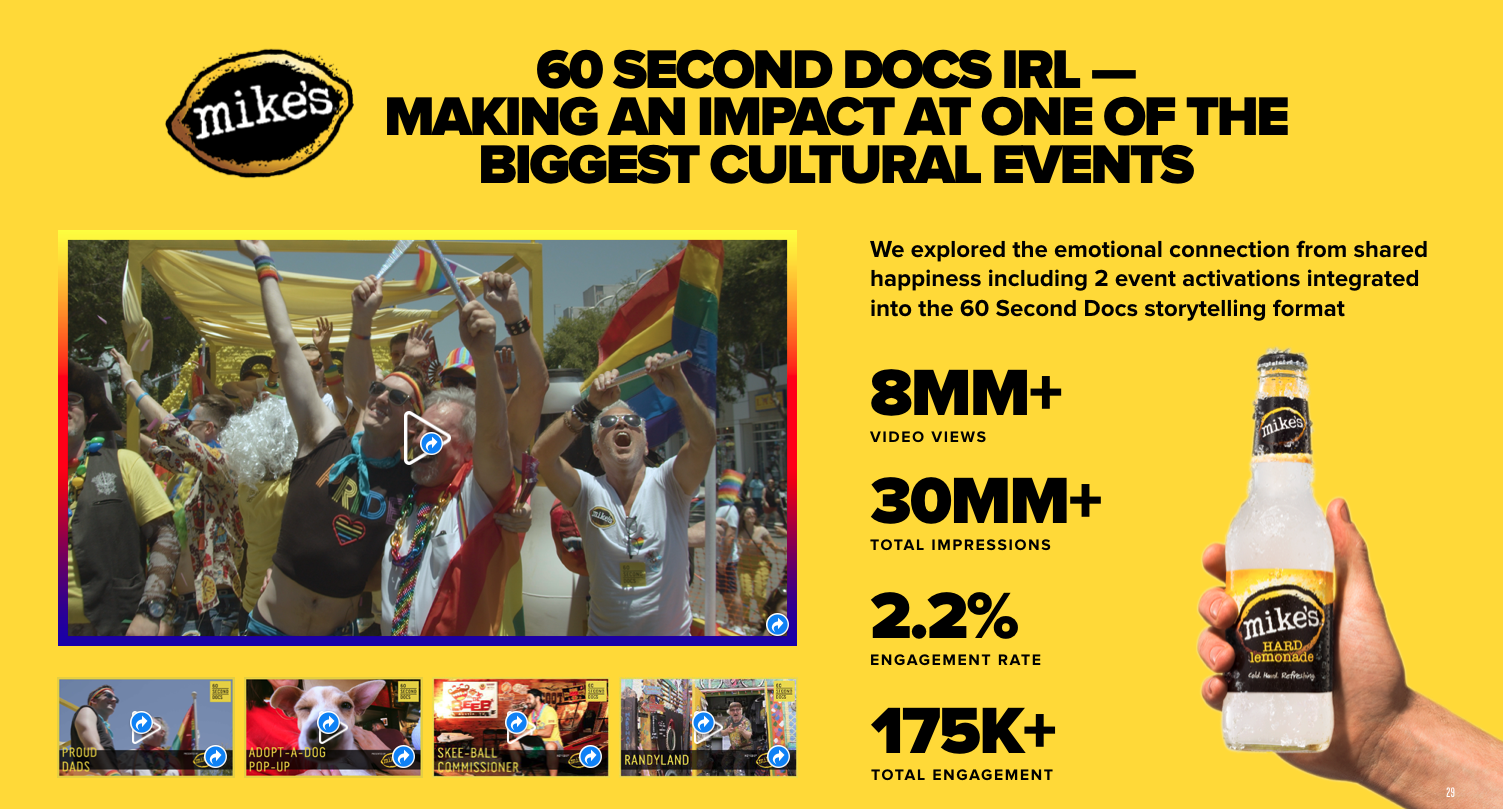 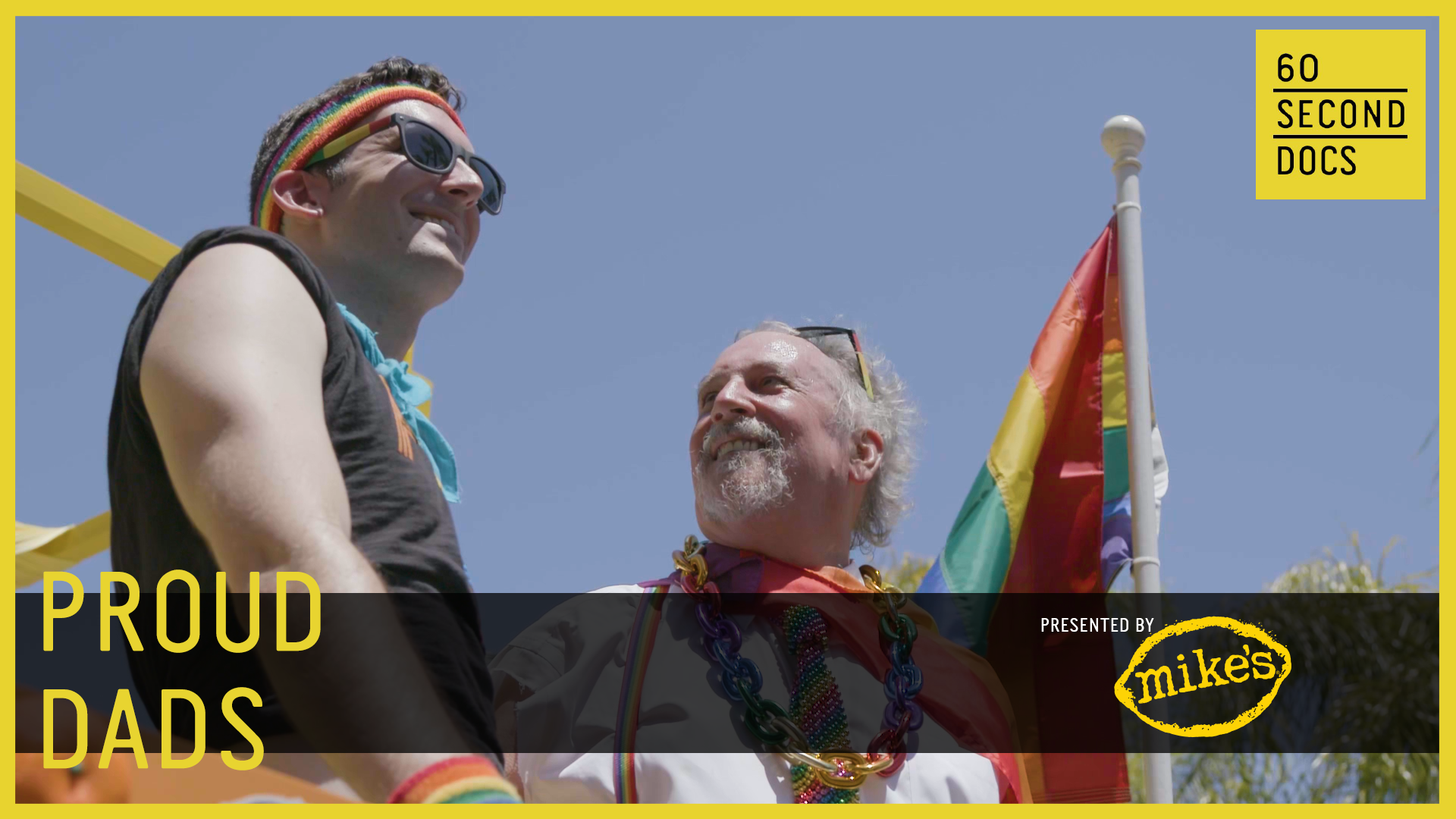