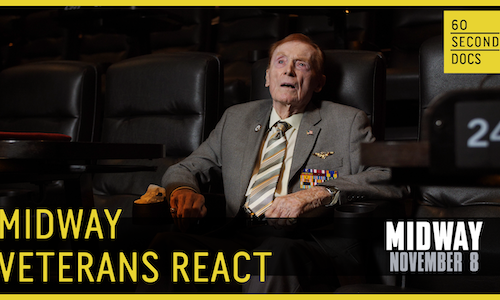 Lionsgate partnered with 60 Second Docs to drive awareness for their upcoming theatrical release of the feature film MIDWAY. The aim was to create engaging content centered on the heroism, courage and emotional power of Midway by highlighting its connection to  the unbelievable underdog story of the real turning point battle of WWII.

With a goal of reaching viewers interested in the historical context and true human interest stories behind the movie’s basis, the partnership evolved into a new format for 60 Second Docs. The brand tackled the “React” genre from a new and authentic perspective: featuring four veterans of World War II’s Battle of Midway. We sought to share the real stories of these four men, nearing or over the age of 100, with an audience who mainly knew the events only as history.

In partnership with Lionsgate, we set up a private screening of the film for some of the last surviving veterans of Midway and recorded their reactions.

Interviews with the veterans after the screening were intercut with footage from the film to underscore their emotional responses and express the remarkable visuals of the movie.

With this compelling viral format, we accentuated the immersive experience of viewing Midway on the big screen through the unique perspective of the heroes who actually lived it.

We launched MIDWAY VETERANS REACT in conjunction with the theatrical release for the film. This served to reach a wider audience, as well as to drive engagement and demonstrate consumer intent to view.

Designed to generate emotional connection to the subjects of the film, the episode revealed the honest reactions of the real-life heroes who fought the Battle of Midway, for whom the film was screened in advance.

We partnered with Lionsgate for a concerted social rollout on their pages, as well as social pages of the film’s cast. All of these factors allowed us to maximize reach. In addition, we created a series of ancillary content pieces to be posted after the initial release.

Upon release, paid media was used to seed the video in social feeds of military veterans who responded positively, as well as fans of Lionsgate movies, true history, historical epics and other thematically similar content.

In total, MIDWAY VETERANS REACT garnered 19.7MM views across 80 social posts, with 405K engagements and an engagement rate of 2X the industry branded content average.The response from our campaign was so positive that the main 60 Second Doc was run as a TV spot across major networks during premiere weekend. Film cast members such as Luke Evans, Ed Skrein, Patrick Wilson and James Carpinello also shared the documentary on their socials, driving additional interest and sparking buzz from fans.

MIDWAY VETERANS REACT saw significant organic social support from military veterans and official US military accounts including the US Navy, US Pacific Fleet, and US Indo Pacific Command,  demonstrating wide appeal among those for whom the themes especially hit home. Those who served, along with family members, friends and lives they’d touched, found the piece especially resonant.

MIDWAY saw a surprise $17.5M No. 1 opening that well exceeded projections, “...fueled in part by a strong turnout in America's heartland” (The Hollywood Reporter).

Deadline said of the episode: “This emotional spot…features four different veterans of MIDWAY - and their reaction to the film…the clip has earned massive views, and offers a really heart-wrenching look at these aged men as they react to a battle they themselves participated in. It’s so encouraging to see such a finely produced clip.” 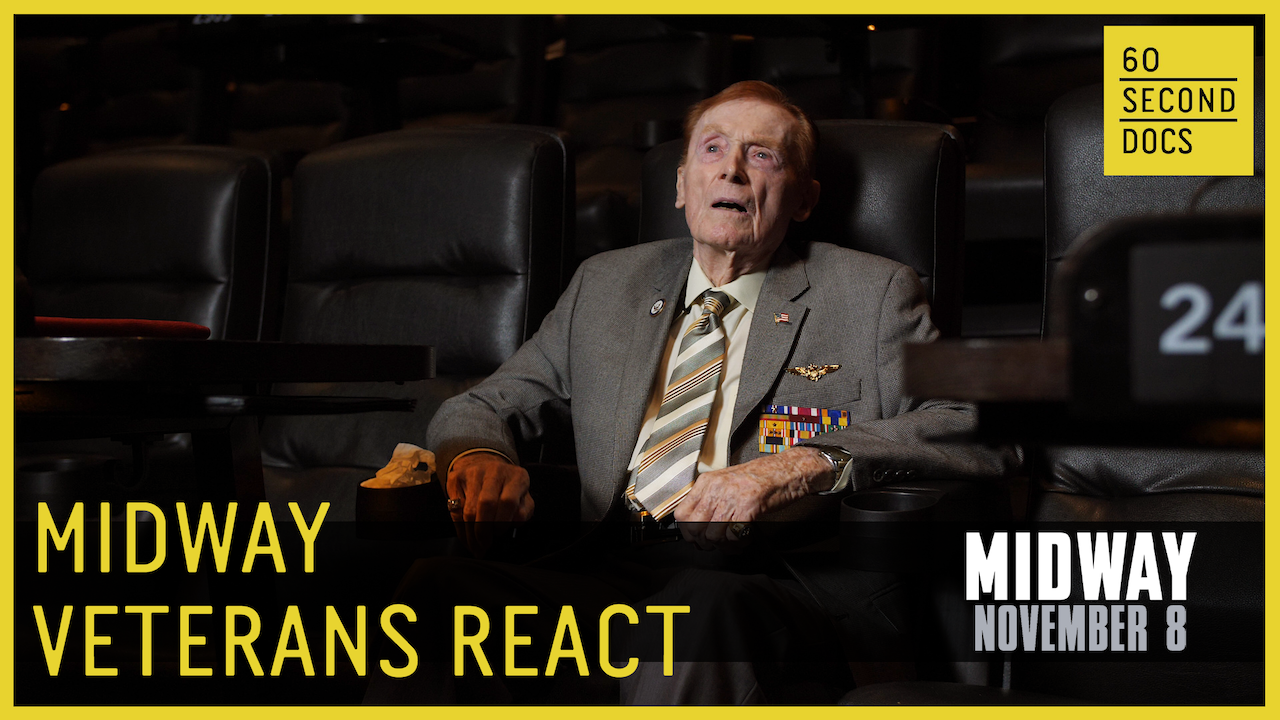 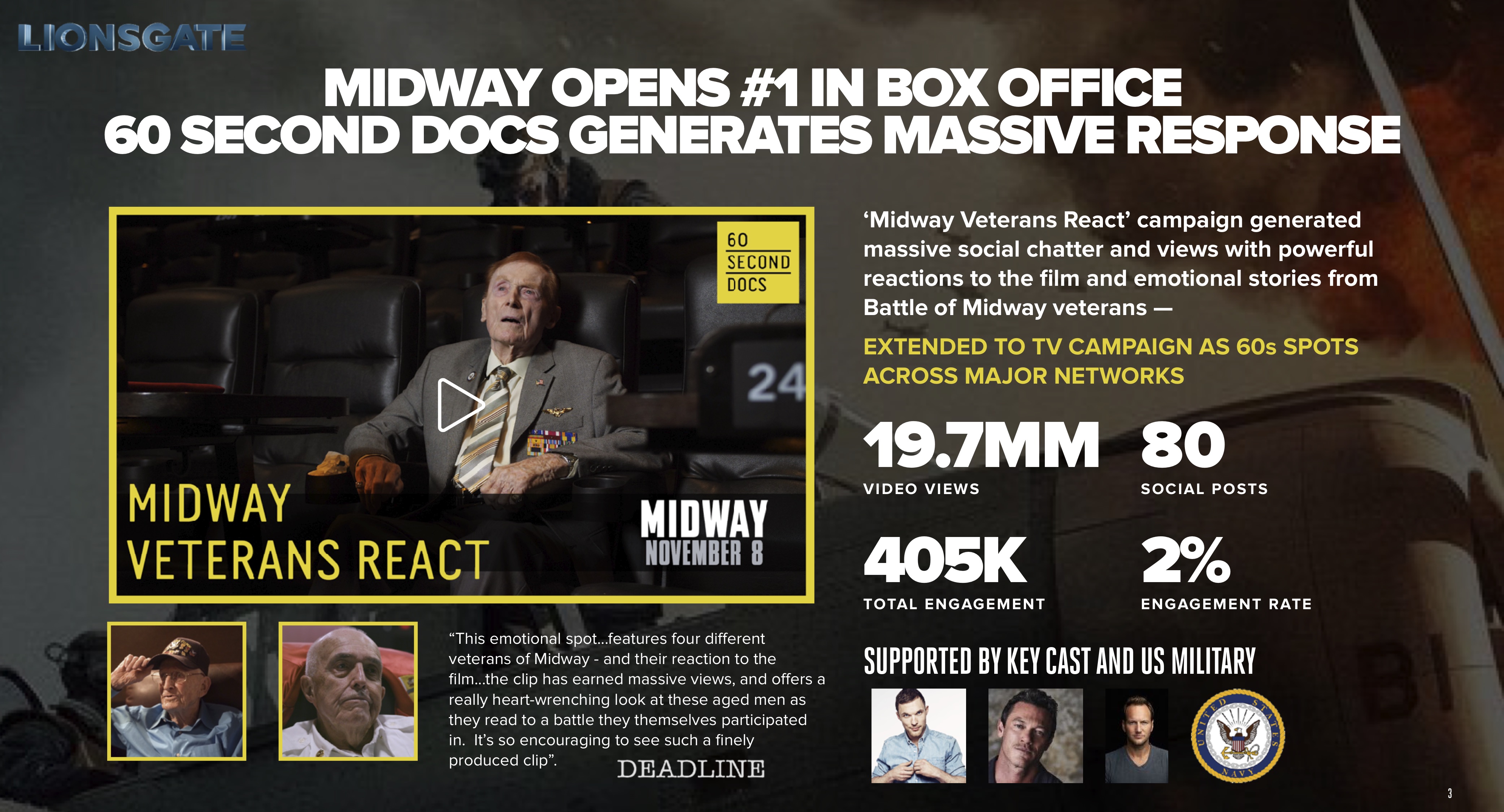