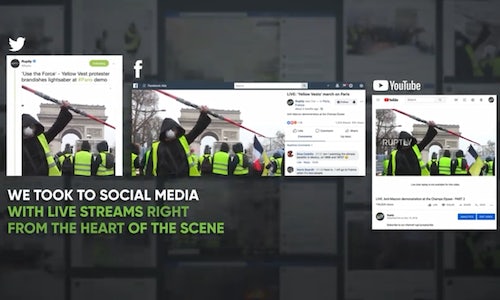 The Yellow Vests movement first began on the streets of Paris in November 2018 as a protest against tax hikes on diesel fuel. While those increases were soon suspended, the demonstrations continued, expanding to other cities in France and even beyond, turning into a national phenomenon and the largest protests in France's modern history. Given the scale and significance of the developments, Ruptly's objective throughout was to provide a comprehensive and impartial account of what was occurring on the streets of Paris and other cities.

Ruptly was in the thick of the action from day 1. Our strategy was to show the events as they unfolded in real-time, as we consider a live stream to be the most impartial form of coverage. We wanted our audiences to make their own judgements through a live 'window' onto the event.

We monitored the protest announcements on Twitter and Facebook and sent our crews to follow the demonstrators. We made sure we had highly mobile teams on the ground that were able to relocate at a moment's notice as the events progressed. When the need arose, we had two teams who provided two live streams from different locations at the same time. Having two teams on the ground also allowed us to dispatch one of them quickly to a location where events were becoming increasingly heated. Our crews on the ground helped the Newsroom to monitor the developments.

We were challenged with delivering the best quality content to our audiences and clients. Our teams found themselves working in extreme conditions, often caught in tear gas or pelted with paint. One of our crew was even struck by a rubber bullet.

Our LIVE streams were shown simultaneously on multiple social media platforms (YouTube, Facebook, Twitter/Periscope) allowing viewers to be engaged and updated as events unfolded in front of their eyes. Our clients were able to share live streams on their social media channels through our cutting-edge LIVE Platform. We followed the fast changing pace of developments every minute of every hour, documenting, recording and streaming them until their conclusion. Being in the midst of the action allowed us to show firsthand what was occurring on both sides between the protesters and the police.

LIVE streams of the 'Yellow Vests' topped the most popular content on Ruptly's social media platforms for 13 weeks in a row. In total we had more than 10 million views on the YouTube and Facebook pages of Ruptly and our clients.

As for client distribution, in total, from November 2018 to February 2019, Ruptly's coverage of the 'Yellow Vests' protests spanned 125 hours of live streams, transmitted to clients in 24 countries'.

Video for The Yellow Vests 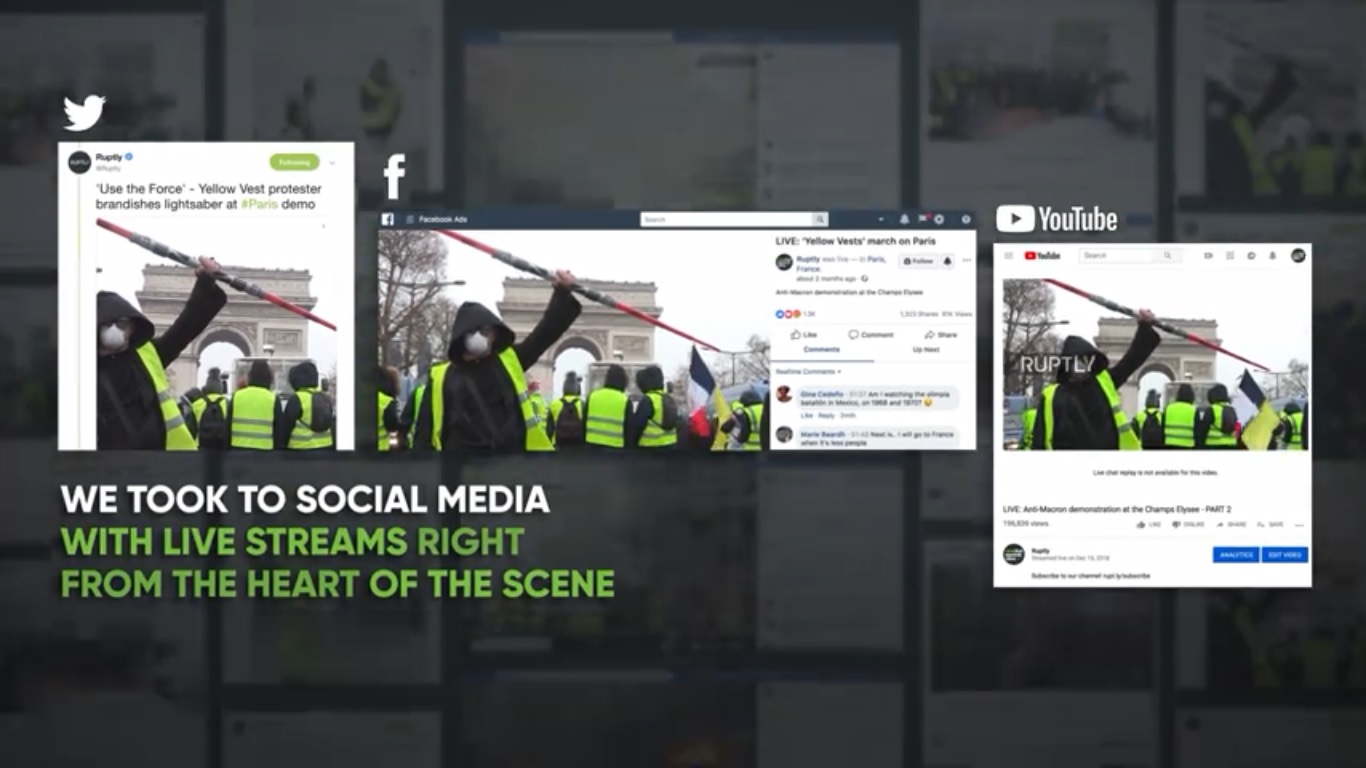